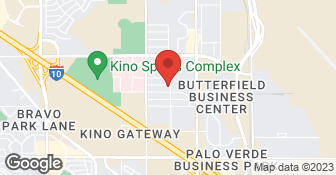 (520) 661-0030 We are a local family owned business, exhibiting A+ Accreditation with the BBB of Southern Arizona. We operate our business in a way that shows our customers we truly care about them. We repair all major home appliance in the Tucson area. Major home appliances we service are: Washer, Dryer, Refrigerator, Wine cabinet/cooler/cellar, Oven, Range, Microwave, Dishwasher, Garbage Disposal, Icemaker, Air Conditioner, Heater, and Water Heater. We also service specialty appliances. Just ask us. We service ALL brands. To list a few: Miele, Subzero, Viking, Wolf, Dacor, Bosch, Thermador, Speed Queen, Samsung, LG, Whirlpool, GE, Electrolux, Frigidare, Maytag, Amana, Admiral, Jenn-Air, Kenmore, Haier, KitchenAid, Hotpoint, U-Line, Fisher & Paykel, EdgeStar and more. We also handle minor plumbing and minor electrical. We have in depth knowledge and skill in Electronic and Mechanical troubleshooting, so we are able to troubleshoot and repair other in home appliances too! EMSP is a different kind of company and we are set apart from the rest. We can service everything electro-mechanical in your home. We are the only company you will need to have in your back pocket for all of your appliance & repair needs. The Service call gets you a qualified technician to your home and an expert diagnosis with estimate of repair. We are competitively priced and EMSP gives you the edge of one stop shopping. We have over 30 years experience in the Electro Mechanical field. We live integrity and take pride in what we do! The next time you have an appliance that is giving you trouble, let EMSP do the troubleshooting and repairs for you!. Sincerely at your service, Electro Mechanical Service Professionals PLLC. David & Sammi  …

They strung me along for 2 years, telling me it would 'be ready to ship soon'. I had to hire a lawyer to get my deposit back as they never delivered. Terrible experience, avoid at all costs!

$. On 4/9/13 I David Heath made a $ 2,600. Deposit to Appliance Plus, Inc. 3262 E. Columbia Street Tucson, AZ. 85714 phone # (520) 326-6849. This $ 2,600. Deposit was for Appliance Plus to restore a 1949?s G.E. Combination refrigerator and I would pay the remainder $ 4,300. When the refrigerators restoration is complete, for a total of $ $ 6,900. The restoration was supposed to take six months. At the time that this happened I was dealing with a man by the name of Rich, the owner of Appliance Plus. I found Appliance Plus by their website and I did business with Rich over the phone and internet because I live in upstate New York. On or around 5/1/. Over a year after I made my deposit on the refrigerator I became concerned about my investment and I tried to contact Rich. After numerous phone calls I finally was able to contact Rich. Rich said that he was in the Hospital, and that I had nothing to worry about because he had employees working for him. Then I heard nothing at all for several days. Then my phone rang and a person by the name of Julie called me and told me that Rich had died and that her and her husband Pete were taking over the business and that they were going to fulfill all of Riches obligations with existing customers. Julie said that they were doing final testing on the refrigerator and that they would send me photo?s of the refrigerator so that I could send the final payment of $ 4,300. On 5/15/14 I sent them final payment of $ 4,300. I made arrangements to have the refrigerator shipped by a local company called caseworks that was recommended by Julie and Pete. After Caseworks received the refrigerator from Appliance Plus and before they shipped it to me they took photographs. I was contacted by Lester the owner of Caseworks, Lester told me that there was an issue with some paint being scratched and chipped on the refrigerator door and that he received it that way from Appliance Plus. I contacted Appliance plus about the problem. Appliance Plus said that they had nothing to do with the problem but they would send an employee over there to fix it anyway. After the so called repair was done by Appliance Plus I was contacted a second time by Lester from caseworks stating that it was a poor repair. I contacted Appliance Plus again and asked them to fix the problem. After Appliance Plus denied any responsibility they sent a repair person over there again. After the so called repair the refrigerator was crated up by Caseworks and shipped to me in New York. After receiving the refrigerator and taking it out of the crate there were several issues. The first issue was that there were scratches on the door and the paint was chipped. This was in the area of the door that was an issue before the refrigerator was sent to me. Also the butter dish on the door of the refrigerator was broken and hanging by the electric wire. I contacted appliance plus and I explained to them that the butter dish was hanging loose from the door and that it was broken. The butter dish has a thermostat built into it that controlees the tempiture of the refrigerator. Without a working butter dish with a thermostat the refrigerator does not work. The refrigerator that I spent $ 7000. On is worthless, it won?t operate without the thermostat. And not only that the refrigerator door will be opened and closed hundreds of times in a year and that we needed a butter dish that won?t fall out. I explained this to Pete and Julie and they agreed with me. They said that they would send me another butter dish. After jerking me around for a couple of months and making numerous phone calls they finally sent me another butter dish. The second butter dish was also broken. I called Pete and Julie and complained. They said that they would send me another butter dish. Five months and numerous phone calls later I still never got the dish. I was lied to several time, Pete said that he shipped me two butter dish UPS and that they were lost. When I asked him for a tracking number he would make up excuses. I knew that he was lying to me. Then his wife Julie called me and said that they could only locate one butter dish for my refrigerator and that it was in a showroom model and that another couple wanted to buy the other refrigerator but only if it had a butter dish in it. Julie stated. ? Send us a used broken butter dish and we will send you the good one that is in the showroom model.? This made no sense at all to me, why would someone want to buy a restored refrigerator that does not work and is missing a part in order to work. I told Julie ?That I would send a butter dish only after they send me a good one because right now I have a $ 7000. Refrigerator, that does not work and is worthless to me without a butter dish with the thermostat on it.? Julie stated that she would not send me the butter dish until I send them one. Not trusting Pete and Julie after they told me numerous lies. I stated to Julie that If they did not send me a good butter dish that I would file a claim with the Better Business bureau. Julie then stated. ?Go ahead.? I have since spoken to several area businesses in the Tucson , Arizona area and I was told that Pete and Julie have been scamming and cheating a lot of people since they have taken over the business Appliance Plus. I am requesting that the Better Business Bureau assist me in obtaining the proper butter dish with a thermostat in it for my Refrigerator. And Appliance Plus can have the two broken butter dishes. Sincerely: David Heath

Description of Work
I hired the provider to restore a old refrigerator. It cost me $ 7000. And when the refrigerator arrived in New York were I live It was broken and did not work. I then found out the hard way that I was scammed by these people and so were other customers. I filed a complaint with the B.B.B. And these bare the details.

Description of Work
Never used them because of distance.

See above. Rich is very friendly during the sales process, but tends to be rude and abrupt when we report a problem. He needs to work on his customer service after the sale. Update: We were contacted by his attorney as soon as we notified him that we were returning the refrigerator. We returned the refrigerator 12/27/12. Photos were taken and the refrigerator was returned in good physical condition (even though it wasn't working). Two employees unloaded the refrigerator and were very helpful, Rich (the owner) raised his voice, used profanity and was very rude. Shortly afterwards we were told that the "cold control" was defective, Rich said that the refrigerator was available for us to pick up (we live over 500 miles away) even though we had told him that we did not want the refrigerator, we wanted a full refund. Timeline: the refrigerator was delivered to our house mid-April, it stopped working early May. Appliance Plus supplied the replacement parts and repair guidance via phone and skype. It stopped working in May, July (the handle also fell off), November and December, each time we had to throw away spoiled food in addition to repair costs. There has been ongoing correspondence between Rich Allen (Appliance Plus), his attorney, Angie's LIst and myself. Unfortunately, Rich is unwilling to refund our money until he re-sells the refrigerator (minus his commission). This appliance should have worked for many years and Rich is unwilling to stand behind his product and provide satisfactory customer service. This issue is unresolved, we have not received a refund and we regret using this company.

Description of Work
We purchased 2 refurbished antique appliances plus $1480 for shipping, we have had numerous problems with both. The extra repair costs have been over $2000. Rich (the owner) is very friendly during the sales process, but when we report a problem, he is very rude. However, his technicians are friendly and helpful. We are returning the refrigerator, stay tuned to see how it turns out!

They did a perfect job. It was not just a surface refurbishing. They made the insides of it like a new gas stove. It was expensive. They gave me a 6 months schedule and it was done well before that.

Description of Work
A had a stove refurbished from the 50's and put in my kitchen.

Carmen, the repairman, was wonderful. I would strongly recommend using this company for your appliance repairs. He was on time and the repair was done quickly at a very reasonable cost I felt. The cost included parts and labor. I was very happy.

Description of Work
They replaced the fan motor in my Sub-Zero refrigerator.

We do not work on anything modern. Generally we don't handle anything made after the 1960's.