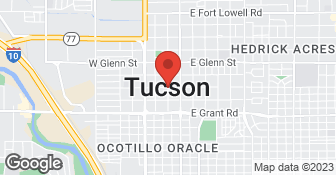 Top Rung Handyman Services is licensed, bonded and insured. We provide service to Saddlebrooke, Marana, Oro Valley and Tucson residents. Our business is built on referrals from our customers so we strive to satisfy every customer, every time. ...

We bring the show room to you. Call today to schedule a free no obligation consultation. Tucson Blinds and Shutters is a family owned and operated company. We are here to provide you top quality window coverings at incredibly low prices. We know your choice of window coverings is an important decision and we take the time to get it right. We provide you with the product details and price information you need to assure you have made the best choice. Additional DBAs - Blinds To Go LLC, Tucson Blinds & Shutters LLC. All orders require 50% deposit down and balance due upon completion of work.  …

20 + years electrical journeyman experience. Experience with residential, commercial, industrial, and solar. I take pride in my work and reputation. Would love to help out with your electrical needs.  …

Lion Coat Painting, LLC is a fully licensed, insured & bonded painter contractor company. Our main goals is to specialize on a clean and high quality work with a high customer's satisfaction. We also specialize in the interior and exterior painting of your home with the highest quality paints. We also do free color consultations. Our ROC# 322-177  …

Pete was responsive, punctual and very professional! It could not have gone better. The work he did is amazing!

He was a little late showing up, so I did have to call to check on his status. Otherwise, the services rendered were satisfactory. I had a list of items I needed completed and he did them all efficiently. He was very professional and I even received a Christmas card from him!

They responded immediately & did a great job. Would definitely use them again.

All things considered, it went well. He had creative ideas which improved our project.

I called and left messages for him and he never returned my call.

Description of Work
I called and left messages for him and he never returned my call.

Talked to Peter Goebel of Top Rung and asked for an estimate to replace my mailbox on September 12th, 2016. He told me to text my address and e-mail to him and he would send me an estimate. Never heard from him again and he would not return my messages!!!!!!!!

Description of Work
He does many odd jobs around the house for me.

I was very disappointed when I received the call back and was told he could not do the work I wanted as I was too far away. I live on the East side of Tucson and he is up in Saddlebrook. Even though on Angie's List it states he services Tucson. I tried to get on a website, but the link on Angie's List did not work.

Description of Work
Called for an estimate from Top Rung Handyman Services on Friday March 11, 2016 and received a call back a few hours later the same day. Was told he could not do the work for me as it was too far.

Ladder frame was installed out-of-square between rafters due to ALL measurements based on his first cut of ceiling drywall. Ladder frame headers/footers were installed based on the drywall cut, not the use of a square against the support rafters. Took three attempts to get the work done: first the opening was too small (poor measurements); second the ladder door would not close properly because the ladder frame was forced to fit headers that were installed out-of-square; third the 22-inch ladder frame width was into the 24-inch opening as a parallelogram. Efforts to point out the problem were ignored. (I subsequently undid his work and reinstalled the ladder frame on the square. Materials purchased for the job were sub-standard. As he 'undid' each error, he used a reciprocating saw to remove nails and in the process cut into the ladder frame (1x4 pine), which may have weakened it. Nice guy with a LOT of impressive tools, but not much of a planner.