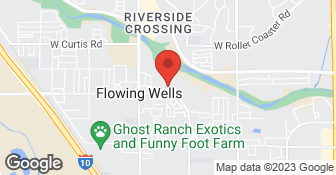 520-293-1330 At One Hour Heating & Air Conditioning, your satisfaction is our number one priority. When customers contact us, we want them to rest assured that they will receive excellent customer service and reliable work. We offer guarantees so that you are comfortable and confident when contacting our technicians. Our on-time guarantee is one of the best in the country. Our technicians are trained, skilled, and experienced to exceed your expectations and needs. We won't keep you waiting – Always On Time... Or You Don’t Pay A Dime!

The technician showed up on time, quickly diagonsed the problem and repaired the issue quickly. He answered all my questions, and after replacing the Compressor Fan, checked the rest of the system to insure things are running good on the unit.

It's convenient to have a company work on HVAC, plumbing, and install mechanical and UV air purifiers. Usuiel and Roberto were great at communicating the work that was done and asking questions to get it the way I want it. I will use this company again.

Description of Work
Plumbing and HVAC

[Member Name Removed]- it was a pleasure working with you- congrats on your new home- Mgmt
5.0

Work was done in a timely manner. Cost was reasonable and they worked with us. Would recommend them and use them again.

We appreciate your business- Were here to help in the future- Mgmt
1.0

My outside faucet/spigot broke off and needed repair. I explain this to Superior One Hour Air Conditioning and Heating on the phone before coming out, and I was told $79.00. The guy showed up 1 hour later took some pictures and told me it would be over $500.00 to replace the faucet, and if I didn’t take the offer I still owe them $80.00 for service call. What a scam!! Instead of using Angie’s list again, I started calling around, within 30 minutes I found a plumber who could repair it for $115.00 including service call. I will NEVER use Angie’s list again., and to top every off, Superior One Hour Air Conditioning and Heating isn’t even billed as a plumber except on Angie’s List.

Description of Work
Replace a faucet

Charged my mother in law 477.00 for a capacitor and wire connection then tried charging her 349.00 for 2 lbs of freon it did not need. You already charge 150.00 service call and that's high but your taking people to the cleaners. This is beyond robbery. She refused the freon ,called me as I've been doing this for 15 yrs. To check it out. How do you tell someone they need exactly 2 lbs of freon. You did not charge it and or weigh anything in. This is absurd and not the last of this! Promise you!

Description of Work
Capacitor and a wire

They had an Angie's List coupon that was $20 for an A/C annual maintenance visit. They did not do any maintenance. They literally looked at the unit and told me things that were wrong. Several things I was told were flat out lies that would have cost me hundreds of dollars. They said my A/C needed 3 things done. Another company recommended one of the three but said it wasn't a big deal and confirmed the rest was BS.

The own of the company, Elizabeth, came to speak with us about the available options after her experienced technician came to do eval. Absolutely, NO hard sell approach - simply presented the facts and then, which options were possible. Gave time to us to think and after letting her know within a day, she had scheduled the same technician to come out 2 days later. Felipe was very professional with a great sense of humor and very knowledgable. We also asked him to install new Nest thermostat. Now our system is working beautifully and we can manage the temp via our Smart phones. Awesome work with an awesome company! Thank you both!

The company did a very good job. They arrived on time and made every effort to ensure that the installation was done properly. They also did a follow-up inspection a week later to make sure the new system was working well. Every member of the installation team was very pleasant to work with.

"[Timeliness] I loved everything about the technicians and front office. Don was awesome I appreciate him so much." By Heather lopez on 05/13/2019

Description of Work
Compressor change out

Met Don at my house and he was very professional and we got there about same time. Went right to work and got everything done and I could not be more happier " By Bob Brown on 05/10/2019

Description of Work
HVAC tune up

"[Technician, Service] The repair man was knowledgeable and got right down to testing and inspecting the blower unit. He looked at the sir ducts and return ducts but there were no clear signs of any kind of leakage or deposits of dust or hair anywhere. Maybe more can be learned when the ducts are vacuumed in July. " By Michael Menaker on 05/22/2019

"[Service, Timeliness, Price, Technician] On time and a great installation job!" By Michael Urman on 05/15/2019

"Superior Air has such amazing service, Price and technicians are Timeliness"

Description of Work
Evap cooler Start up for season

: "Service I needed some to fix an AC unit for a vacation rental On a Friday night and Mike came out an quickly fix it. Happy Ending "

"Service, Timeliness, Technician, Price and technician Usiel was very professional and had a nice personality as he explained everything."

We are very pleased with the service from Superior Air's techs as they are amazing and very helpful with both my spouse and I. Front office was very helpful and kept us informed on the entire call.

Angie’s List special $65but the company wanted to charge me over $200 to do Air Duct Cleaning They are not honoring the price. Did not use them.

Description of Work
Angie’s List special $65but the company wanted to charge me over $200 to do Air Duct Cleaning They are not honoring the price.

Great Customer service from both front office an technicians. I would recommend Superior Air to my friends and family.

" Super experience. Expedient and professional service was timeless and will recommend to my friends and family"

Description of Work
HVAC tune up

I give Superior Air's Technician Usiel was very pleasant and knowledgeable. Front office was helpful with all my requests Great service!" Thank you for the amazing help!

I would recommend Superior Air to my friends and family. Technician was amazing as they arrived on time and ready to work. They repaired my unit just in time for the cold front.

Description of Work
hvac no heat

Professional work by professional technicians done in a timely manner thanks "

How is Superior One Hour Air Conditioning and Heating overall rated?

Superior One Hour Air Conditioning and Heating is currently rated 4.8 overall out of 5.

What days are Superior One Hour Air Conditioning and Heating open?

Superior One Hour Air Conditioning and Heating is open:

No, Superior One Hour Air Conditioning and Heating does not offer eco-friendly accreditations.

Does Superior One Hour Air Conditioning and Heating offer a senior discount?

Are warranties offered by Superior One Hour Air Conditioning and Heating?

What services does Superior One Hour Air Conditioning and Heating offer?

Are there any services Superior One Hour Air Conditioning and Heating does not offer?