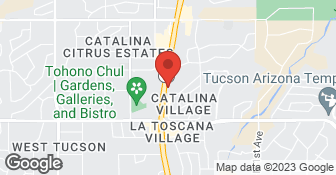 This is the fourth time we’ve used Strongbuilt for remodeling and necessary repairs to our home.

Description of Work
An employee re roofed the patio roof. |Do not remember the exact cost or the exact date of service in Fall of 2014. |They were selected for their excellent reputation and a competitive bid.

Description of Work
Strong Built is doing a master bath remodel beginning January 19, 2015. I was very impressed with Chris when he came to see the work site before bidding the job. I am looking forward to working with them!

Contacted regarding having a custom cabinet done in our entryway and custom vanity and shelf in our half bath. Chris came to our house to go over details of what we wanted. After talking with him for 15 minutes it seemed like he was trying to get me to do something different than I was explaining to him. Before he left I told him we were getting quotes from other companies, he seemed unhappy about this but told me he'd get in touch with his quote. Got a quote thru email from him and another company, Chris' quote was almost 50% more. Called him to see if he could match or come down on his quote. His secretary called me back and refused to budge on price, explained I had heard good things and really wanted to try to work out a price that would make us both happy, again she said Chris wouldn't budge on price- that his services were so sought after and good that he didn't need to reduce his price for me. Needless to say, I went with a close competitor of his and was MORE than happy!!!!! I now have a beautiful custom cabinet in my entryway that everyone comments on AND I got it for a really great price! Just because you do most of your work in Oro Valley doesn't mean you can charge more. Felt that Chris was pushy and his secretary was just rude.

Description of Work
We did not go with this company.

The proposal related to this project is dated October 2, 2013. We reviewed our email correspondences from October 7-9, 2013 and the emails between Liberty and Pam/Chris were very pleasant and professional. The pricing of the project was broken down in great detail to include custom craftsmanship cabinetry as well as plumbing, electrical, vessel sink, drywall and paint. The additional items above and beyond the cabinetry accounted for 30% of the cost of the proposal. We regret that you felt compelled to post this, as we have a growing stack of very positive customer surveys, a growing schedule and backlog and were included in the Best of the Northwest 2013.
5.0

Strongbuilt Enterprises is fantastic. They have done several jobs for us ranging from large to small, and each time they have been prompt, courteous, and reasonably priced. The work has been exceptional. The owner utilizes a first-rate team who are honest and professional about how the job needs to be done while keeping cost in mind. We highly recommend them and will definitely be using them for future projects.

He was referred to me. They are fantastic, hes got a team of people that can do anything from small to large work.

Description of Work
The last job i used them for was to repair some brick and stucco walls.

We bring the show room to you. Call today to schedule a free no obligation consultation. Tucson Blinds and Shutters is a family owned and operated company. We are here to provide you top quality window coverings at incredibly low prices. We know your choice of window coverings is an important decision and we take the time to get it right. We provide you with the product details and price information you need to assure you have made the best choice. Additional DBAs - Blinds To Go LLC, Tucson Blinds & Shutters LLC. All orders require 50% deposit down and balance due upon completion of work.  …

Energy can be complicated. We're here to make it simple. Elevation’s whole-home solution gives you everything you need to power your home more efficiently. Elevation is one of the fastest-growing companies in the country, a multi-year Department of Energy Contractor of the Year, and recognized as one of the best places to work. Reduce Your Energy Use An energy audit will spot ways to reduce your home’s wasted energy by 10% or more and help your home earn Energy Star Certification. Produce Renewable Energy Elevation’s top-tier solar equipment comes with a 30-year warranty and renewable power. Take Power Over Your Energy Advanced, real-time energy monitoring through Curb technology gives you the information you need to take control of your energy use.  …

New construction, remodeling, additions, and everything in between.

Strongbuilt Enterprise, LLC. is currently rated 4.9 overall out of 5.

No, Strongbuilt Enterprise, LLC. does not offer a senior discount.

Strongbuilt Enterprise, LLC. offers the following services: New construction, remodeling, additions, and everything in between.

Are there any services Strongbuilt Enterprise, LLC. does not offer?