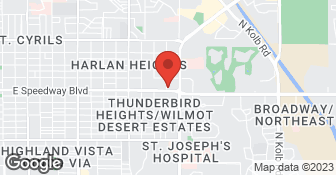 Spartan Plumbing is the leading residential and commercial plumbing company in the Tucson, Arizona area. We specialize in fast, reliable, 24 hour service, while focusing on providing quality customer service to our clients. Call us today for more information!...

Warrior Heating and Cooling LLC is committed to excellence in every aspect of our business! We uphold a standard of integrity bound by fairness, honesty, and personal responsibility. Our distinction is the quality of service we bring to our customers. Accurate knowledge of our trade combined with ability is what makes us true professionals. Above all, we are watchful of our customers' interests and make their concerns the basis of our business. Give us a call today!  …

We guarantee your satisfaction and we won’t leave until the job is done right. We pride ourselves on the quality work we provide, while delivering great customer service! Check out our services offered and call or click to schedule a free estimate today  …

They are excellent saving me thousands when another company said all my pipes needed replaced. I will highly recommend and use them, again.

I give them an A for quality or I wouldn’t have gone with them. They came right out immediately and they discussed the business part and what he could offer us and then came out and did the job. We are very pleased with it. They were right on time, perfect. They cleaned up the area. The one who came out and gave us the estimate was the owner and his crew worked until dark to get everything done completely and finish what we bought. They went above and beyond.

Description of Work
We used Spartan. They were good and we bought an air conditioning unit.

Called and was quoted a price of $96 per hour for faucet installation (with minimum one hour charge, then charged in 15 minute increments), plus $25 trip charge. Technician was onsite for 1 hour and 15 minutes, which would be $145 total ($96 + $24 + $25). Instead, I was charged $217. Called the Office Manager the next day and was told faucet installation is a flat rate of $192 (plus the $25 trip charge). When I explained I was quoted a price of $96 per hour and the technician was onsite for only 75 minutes, she said the quote was wrong. After much insistence (and I admit I got very angry), she finally agreed to give me a refund of $48 - although I really wanted a refund of $72 (45 minutes of labor). Office Manager got very defensive and angry with me over this - certainly not a "customer first" approach and doing what it would take to make me happy. Had I been refunded $72 instead of only $48, I would be happy and would not have written this negative review. (BTW, the technician did not center the faucet (spout would turn to the left but not to the right). The faucet was functional, but the technician had to come out again the following day correct the installation.)

They went above and beyond to get the job done right. They followed up afterward to make sure I was satisfied.

Description of Work
There was a water pipe that burst so they replaced the pipes in the kitchen. They fixed the tile around the tub.

I called at Spartan at 3:00 p.m. Saturday and was told someone would be at the house between 4:00 and 6:30 p.m. 7:00 p.m. rolls around and nobody is there and nobody has called me. I call back to get the answering service, who contacts the guy who was supposed to handle the call. 1/2 hour goes by and I get a call from some guy who is equivocating about when he will be able to make it out ("should be by 8:30" blah, blah, blah). I start calling other plumbers, but of course it is now Saturday night and I am being told by Roto Rooter a service guy can get to me in an 1 to 2 hours. I ask what the charges are and am told I will have to wait to talk to the service guy for that information. Sure, I'll wait another couple of hours to be given some ridiculous charge. Cummings Plumbing's answering service said $99 for the first hour. The plumber who called me said no, it is $346 for the first hour. I told him to forget it. While I am calling a guy from Spartan says they are ready to come by if I still want. Ok, I say, come by. They try to snake out the line and say the snake can't reach the blockage and all they have is a 90' snake, so my what I need to do is have a second cleanout installed closer to the street. This is a rental I own and is occupied, as the plumber knows, so he knows I have to fix the problem. When could it be done?, I ask. "I can get a crew out here tomorrow," he says. How much will it cost? I ask. "About $2,200," he says. I tell him no, thanks, and pay him $152 for not fixing the problem. The next day, Tom from Silverado Rooter and Plumbing comes out and clears the blockage for $130. I subsequently call the Spartan guy and ask why he didn't pull the toilet close to the sewer line and snake the line out. He tells me he used to do that, but because of possible problems with the toilet flange blah, blah, blah, he doesn't do that any more. Really? Digging up and adding a cleanout to an 80 year old sewer line for $2,200 is the way to go, huh? Something tells me that after they started work, I'd be hearing that the sewer line is old and cracked and I needed to replace it for, say, $8,000. Regardless, the guy brings a puny snake that isn't up to the job, charges me $152 to not fix the problem, and recommends an expensive solution that is ripe for trouble rather than pulling a toilet because of some speculative concern that the toilet flange could be a problem. So, I speak with Jeb, the Spartan service manager, because I find it hard to believe in the big truck the plumber came in there was not a longer snake. Jeb confirms that all they have are 90' snakes with a 10' extension (the bill I received says only the 90' snake was used) because code requires a cleanout every 100'. Jeb then acknowledges that there are a lot of houses in Tucson that were built before this code was in place. He confirms that they used to pull toilets and run snakes, but don't anymore because blah, blah, blah. He offered to refund $50. I told him to keep it, that and I would use every review site I could to relay my experience and warn others away. On a Sunday afternoon, Tom from Silverado Rooter and Plumbing responded to my call regarding a blocked sewer line, showing up right when he said he would. He warned me in advance there was an extra $25/hr weekend rate (about $100 for the first hour, normally) and a nominal mileage fee, which was peanuts compared to what some of these other gougers charge. Within 1/2 hour, Tom had the line cleared, then snaked it again for good measure with the 150' snake he brought. The difference between this honest, quick resolution of a common problem contrasts with the responses of Spartan plumbing, which I had the misfortune of call first. If you want a company that has inadequate equipment, then tries to tell you you will have to spend thousands of dollars do something that is liable to create even more problems, call Spartan. Since I dealt with them, I have heard similar stories about how Spartan tried to turn a low-cost job into a job that cost thousands of dollars. If you want to fix your problem in a reasonable manner, call Silverado. If you want to spend thousands for what should cost $100 to $200, call Spartan.

Description of Work
Spartan responded to my call to have a residential sewer line cleared.

They were good. Very professional and prompt.

Description of Work
They did the drain in the bathtub.

They arrived on time and were very professional, according to the friend who was on-site for the repairs. The leaking was alleviated so I thought everything was ok. A year later it started leaking again. Upon closer inspection I saw that the arrow on the valve body (to indicate the direction of water flow) was backwards. I don't know why it worked as long as it did, but obviously it was installed incorrectly. The automatic feature of the drip system hadn't worked since before the repairs, so I don't know if that was due to the valve or not. Since then I hired an actual landscape company to make repairs and everything has worked properly.

Description of Work
Replaced the automatic valve for my back yard drip system.

Spartan is 2-3 times as expensive as others and because they know this, they want to get your money without seeing what the competition will provide. They charged my credit card for the sewer video without ever providing a DVD or any kind of interpretation of the video so that it could be used by competitors. Spartan advertises as the only one authorized for trenchless repairs in Tucson -- however that is not true like their other come ons.

Description of Work
Spartan was called out to look at doing a trenchless pipe repair. However, they knew from the onset that trenchless was not what they were going to propose and charged me for the sewer video / assessment anyway.

I used to like them, but they were trying to sell me things which were untrue. I think they were trying to commit fraud. The guy came out, and we had a stoppage, and it was a cold day. I was sick, and he goes out there, he ran the roto rooter, and then he said that I had a busted pipe and I needed to have it replaced. I asked him what it would cost, and he said it would cost between $8000 and $15000. I asked what they were going to do, and he said they were going to dig up the whole yard and do it. He said that they would come with a camera. I said I was going to get more quotes, and the minute I said that, the whole tone changed, he packed up and got out. A few weeks later, it still wasn't draining well, so I called another company, and he said that he didn't snake it all the way out, and punched a hole to drain it out. They found roots at the bottom there, but they didn't find a breakage. They finished the job and it was reasonable. Spartan did not come back with the camera. I didn't appreciate the high pressure sale. There was another experience as well, where they charged me $250 for something that was $125. They wanted to dig up my front yard, which was not needed, and that is crooked. They showed up on time.

Description of Work
I had some bad experiences with Spartan plumbing.

I did not find this service provider on Angie's list! Found it on Google Search. The ones I contacted on Angie's List (four providers) were unable to come out the same day and the charge quoted was pretty much the same found on Google Search. Spartan Plumbing did come out within the hour and fixed the problem. So my experience with Angie's List was an unproductive use of my time and money. It may serve its purpose as advertised but with the information out there for all it seems useless.