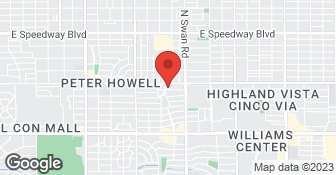 RDC Painting, Inc. is a owner operated company. My crew and I only do one project at a time so we can focus on doing your job with out any distractions. I am fully licensed, bonded and insured. My AZ contractor number is 232858. I am a accredited member of the Better Business Bureau. I offer free estimates, free color samples (up to five) I can give 5,10 year or a lifetime warranty on paint. I will meet or beat most licensed contractors bids. Call today for a free estimate. Additional email - rdcpainting1@cox.net , contact name - Doug

We used RDC Painting in December '09 to repaint the house and were pleased with the work then, it’s still holding up well. Doug Carr, the owner, is a hands on kind of guy, it's not a one man band, he has a small staff and he is on site every day himself painting and overseeing the work. He’s not just a Boss who shows up when it’s estimate time, then sends a couple of gofers along to do the work, like some. We had several quotes, RDC was not the cheapest but also not the most expensive. They do however, use the very best materials. If you want a cheap job done, look elsewhere, but if you want a quality job without any mess, grief or trauma, look no further. By all means get other quotes, we always do, just to get an idea of the price. They started work on the roof promptly at 8am, the pressure washing was very thorough and took about four hours. As the roof is actually divided into five separate roofs, one of them was able to start sealing and painting before all the pressure washing was finished. By the end of the first day, about 5pm, the first coat had been applied to the entire roof. The next day, again at 8am sharp, they returned to apply the second coat. This was finished around 1pm, the site cleared, equipment packed up and gone before 2pm. No spills, no mess. They used Kool Seal Premium Elastomeric Roof Coating. It says on the can that it’s warranted for 10 years. I think that’s wishful thinking in Arizona. Doug though, does warranty the job for 5 years in writing, not many others will do that.

Description of Work
Painted outside

He did more than was required at a great price.

2 guys patched all cracks and painted the entire house in 3 days. They even offered to do the security doors, which weren't on the estimate, for no extra cost. They were very professional, and did a great job!

Description of Work
Had entire exterior (trim and walls) painted. Home is 1330 sq ft stucco (plus 500 sq ft garage) older house built in 1948 with many cracks.

WHEN THEY CAME OUR TO PAINT THEY DIDN'T MAKE A MESS. THEY WERE VERY RESPONSIBLE AND THEY HAD WORKED IN A TIMELY FASHION. THEY LAID PLASTIC DOWN WHEN THEY STARTED TO PAINT SO THEY DIDN'T GET OUR FURNITURE SPECKLED WITH PAINT.

Description of Work
THEY PAINTED THE WALLS ON THE INSIDE OF THE HOUSE.

We specialize in residential house painting and commercial painting, both interior and exterior. We pride ourselves in offering the best warranty in Arizona on our exterior house painting jobs. All of our workers are employees, we do not sub-contract any work so you can rest assured that you are getting the best and highest skilled painters in Phoenix. We are a drug-free company and background check each of our employees. We pride ourselves in constantly training our crews and working on always improving our quality, we focus on setting the standard for all other painting companies to strive towards.  …

RDC Painting Inc is currently rated 5 overall out of 5.

No, RDC Painting Inc does not offer eco-friendly accreditations.

No, RDC Painting Inc does not offer a senior discount.