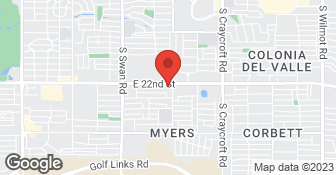 Quick Fix Appliance Repair, Cooling and Heating is a third generation Tucson family business with over 50 years of related trades experience. We pride ourselves on giving our residential and commercial customers fast, friendly, reliable and affordable service year after year. Whether it’s a new installation or routine service, a household appliance or heating and cooling system – no matter the make or model – you can rely on us to fix the problem quickly and restore your peace of mind....

When you have commercial or residential work that needs to be done quickly and with an eye for quality, look no further than Superior Air. We have the most highly-trained, industry-certified master technicians with years of experience working for both commercial and residential clients.  …

We specialize in all phases of heating and cooling services, installs, repairs, maintenance, and more! We guarantee your satisfaction, and we won’t leave until the job is done right. We pride ourselves on the quality work we provide, while delivering great customer service! Check out all the services we offer below and call -or- click to schedule a free estimate today! A/C and Heating Repairs Duct repairs Installations system maintenance estimates and much, much more  …

Description of Work
This company went out of business 2 years ago which means my "life time of free yearly servicing" is now gone.

Description of Work
Complete service on AC and Heating Unit

We had been told previously by the factory authorized repairman who diagnosed the problem (failed electronic control component) that the component had been discontinued in more recent models (our appliance was 5 years old) and was unobtainable. Ed from Quick Fix said he would try to get it running with a universal thermostat, even though this would not restore all of the functionality we had lost. When he came, he found that the appliance would not accommodate this approach. But he was successful in finding the actual replacement component we needed, ordered it, and returned to install it, and now our wine refrigerator works perfectly. We had given up on it after the first guy said he couldn't help us.

The oven ignitor on our Amana gas oven had gone out. I called Quick Fix and they were able to come in a timely manner. Ed took a look at out oven, and had the replacement part in his truck. The service was quick, professional, and I was satisfied.

He was great. He was efficient, on time and did a good job.

The tech arrive and started on the outside with the condenser and cleaned the coils then came inside to clean and check the unit inside. After a period of time when the outside unit was dry he started taking reading amps and volts to record for future readings. He then proceeded to the interior and took temp readings at registers to show for future information.

Description of Work
Complete cleaning and test and recording all readings

They were very professional on all their work and in their contact with us and treated my equipment with respect and not derating my equipment.

Description of Work
They checked my unit and showed me what was failing or going downhill. They gave me an education on how the AC unit worked and what is the major components are used for and how a higher SEER rating of an ac is obtained. I would hire this company again without hesitation. They completed a complete inspection. I have noticed my utility bill climbing.

He came out immediately and took care of business. What stood out were his promptness and his thoroughness.

Description of Work
I used Quick Fix Appliance Cooling and Heating to fix my washing machine within the last few months. We actually used him twice; the other time was in March. Freddy came out and replaced the transmission that was under warranty from the other service call. He also replaced a timer at our request. He tried to say it wasn't necessary, that it was still good. My husband insisted on it. The repairman was honest and said it was an optional thing and we could have it done but it might never go out. He said we could have it done while he was in there and it would save another service call.

I found Ronnie's Quick Fix Appliance on Angie's List and called them. The technician came out and spent nearly an hour testing both the ice maker and the garage door activator. He could not fix either item but gave us referrals to two separate places that eventually did install an new ice maker and a new garage door opener system. The tech said there was no charge but I did get a bill for $24.50. Initially I had expected a service call charge of $49 when I booked the service.

Description of Work
We had an inoperative ice maker as well as a garage door opener that would not function.

Smoothly. No problems. They came and went. Arrived wth all equipment 24 hours after I requested their services, Took them about an hour.

Description of Work
Replacemet and removal of air conditioner with block and tackle truck, removal and replacement of water heater. All equipment comes with warranties and twice a year check ups.

Thank you for the kind words, Member! It was a pleasure to be of service to you and please call again if there is anything you need.