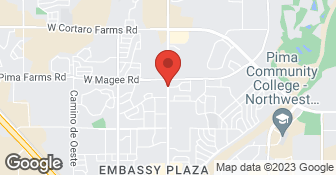 Award winning. We are proud to be locally owned and operating since 1981. We believe supporting our local economy is so very important to the future and well being of us all. We have a great team of trained Technicians, with over 10 fully equipped service trucks that can be dispatched 24 hours a day. Being invited into your home or business is an honor so we strive to minimize any inconvenience or interruptions. Safety and efficiency always our first concern, along with cost effective repairs. Our clients are our best sales people, so your satisfaction is our first priority. Please email me at: info@pioneerplumbing.net  …

#1 RATED HVAC AND PLUMBING PROVIDER IN SOUTHERN AZ. 24-HR EMERGENCY SERVICE. ALL INSTALLERS AND SERVICE TECHS AT OUR AWARD-WINNING COMPANY HAVE AT LEAST 10 YEARS EXPERIENCE! Guaranteed highest quality at an affordable price. Our team has well over 100 years of experience. We offer all major brands like Lennox, Trane, Rheem, and Amana. An A rating with the BBB.  …

We had this company come to our office for a backflow test. The test failed and we were given a quote of approximately $250 to repair. Once they began the repair, we were told there it was going to require more parts to the amount of approximately $600. We were told it would be better to get an entire new unit and the cost would be $800 for parts and labor. We told them to go ahead and get a new unit and they said they would be back first thing in the morning to install and get our water back on. Later that afternoon at 3:40pm, we received an email stating that it was now going to cost $875 instead of the agreed upon $800. When we asked why it was costing more than the agreed upon price, we couldn't get a straight answer. We felt we had no choice but to sign the estimate of $875 since our water was off and everything was torn apart at this point. At 11:15am the next day, Dean (owner) showed up to finally install the new unit. When we asked him why we were told $800 and the estimate came in at $875, he couldn't tell us a reason. He called his office and the lady he spoke with denied telling us the original $800 price. Dean refused to honor the original $800 estimate. I hope the $75 extra they received plus losing our business was worth it since we have used this company for several years for both our buildings.

They were professional and responded promptly when called.

They did a phenomenal job. They were just amazingly good and very inexpensive. I found them on my own. They are actually going to come back. They did a lot of work and there is some more work to be done. I am just not ready for it yet, so they will be coming back. The estimate I got was quarter of whatever the other estimate I got. It was amazing. There were two guys and they did a great job. I would call him back again.

Description of Work
I used the services of Dean's Plumbing LLC. He set a bathtub for me, he did shower and he is going to do two vessel sinks when he gets back. I spent $1500 for the shower and the bathtub. They had to do some concrete work and they had to do a lot of re-cutting and a lot of copper work.