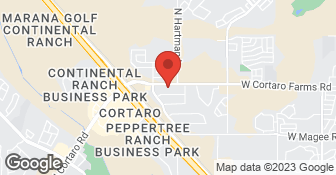 Voted best of the northwest! Premier landscape design in Tucson since 1985! Petscapes by the experts, hardscapes, fireplace, BBQ, fire pit, retaining walls, lighting effects, pool decks, pavers and driveways. You will work directly with the owner to ensure that your landscape is unique, trouble free and beautiful! Free estimates....

Get the best for your tress and lawn! We offer experience with quality work at affordable prices. With our background of 20 years, we can give your trees and yard just what it needs to look beautiful and healthy. We deal with residential and commercial properties, big or small. Call now for your FREE ESTIMATE. Whether you need a tree trimmed, weeds treated, a new irrigation system, or a complete landscape, we have the experience, tools, and knowledge to provide your outdoor space with the perfect look and feel to meet your needs. No Job is Too Big or Small!  …

Andy's Irrigation specializes in drip irrigation repair and installation. We help homeowners save money and precious water with our quality products.  …

Overall, we are very pleased with the final outcome. THE BAD: Cost is a little high and scheduling took a while due to very high demand for their services. THE GOOD: 1) Quality is very high 2) Very fast to complete, once work started (~8-9 days) 3) Veteran discount 4) Super helpful (we did our own demo to save money and Paul: loaned us temporary fencing, helped with tools, and loaned us trailers 5) Local family business that treated us with value We will use Owner/Operator Paul Cutler of Cutler Landscaping again. Our backyard looks like it came out of Home and Garden magazine. Everyone, at our annual holiday party, was blown away by our backyard. We competed the business with 5 different companies and Paul's price was roughly in the same ballpark, but the quality and personal attention was head and shoulders above the rest. We have the front yard next and I am not going to waist time competing the business this time. I am just going to Paul right away.

Paul was prompt to all appointments and responsive to any changes that were made as the work was being done. His crew was excellent. They were artistic in their placement of the stonework and cleaned up the yard after working. The crew checked with us if there were any questions about placement or size of paving and when building the barbecue. Cutler Landscape took the yard from bare dirt to an inviting outdoor environment perfect for entertaining. and family gatherings.

Description of Work
Complete backyard design and landscaping that included coping around a pool, stonework on pool pillars. Building a barbecue that included an island eating space; raised platform for a fire bowl and a retaining wall.

We used Cutler Landscaping Inc. I used them last year. His crew was very polite. They did an excellent job but they're poor on follow up. We called him several times and he's never answering his phone and he doesn't call back so I don't know if he's, I mean we had a few plants die that we wanted to replace, well were having someone else replace them instead.

Description of Work
They did landscaping and lawn irrigation service.

It didn't go at all! Maybe my job was too small for Cutler's, but if so, they shouldn't have agreed to do the work.

Description of Work
The provider showed up promptly for the estimate, but the estimate was late (I should have known at this time that there would be a problem). In early May, we agreed that the work would be done in June so I agreed to use Cutler's as my contractor. I signed a contract and sent a 50% deposit on June 2. After that, Paul did not return my phone calls or emails. Finally, during the third week of June, I talked to him and asked for a date when the work would start. He would not give me a date! At the very least, I expected a start date after a month of waiting. So, he voided the contract and returned my money. I need to work with a responsive, c ommunicative contractor. This was unacceptable.

All the workers were courteous and on time. They completed the work in less time than anticipated and we were very happy with their professionalism and knowledge and work ethic.

Description of Work
Paul and his great group of men cleaned up our entire front and back yard of a home that had been vacant for 4 years. They cleaned up pack rat dens, trimmed, weeded and raked. They planted our front and rear yards with xeriscape plants and relaid bricks and sealed planters.

OK - Until he never followed up. After looking over the property and discussing my desires he said he 'google' the property and be back to measure and prepare a proposal. He never came back and never contacted me after the initial interview. I guess he was too busy with other work. I would of at least expected to get a courtesy call to let me know he wasn't interested. I have to admit that I did not try to contact him again but the 'ball was in his court' and there are a lot of other landscape contractors to do business with.

Description of Work
Came to my residence to evaluate the job. He was on time for the appointment.

I really liked them. He was super friendly. It was just too far out of our budget to go with it. If we are able at a point that we're able to do anything, we'll certainly contact them back. He was nice and probably the most professional of all the ones that came to talk to us.

Description of Work
I got a quote from Cutler Landscaping. It was to tear down what was existing in the backyard and replace it. He was going to do a retaining wall, some landscaping and lighting.

I called Mr Cutler for an estimate to remove half the lawn in our back yard and replace it with a patio with built in corner benches. Mr Cutler responded with sample pavers and an estimate the following day. I added walkways along raised rose beds on two sides of the yard, thought the estimate reasonable for the work to be done and finalized the contract. Mr Cutler arrived early the following morning with a work crew of five, marked the areas of lawn to be removed and reviewed the project with them in my presence. Mr Cutler left and the crew went to work stacking pavers chosen for the patio and removing grass from the areas to be paved. There are a number of raised beds planted with roses and lavendar along two sides of the yard. One of these was out of alignment and this was straightend. Also, a 4' x 8' raised bed was rotated 90 degrees and moved to better fit in the yard with the new patio. With that accomplished, a bed of sand was laid over all areas cleared of grass and thoroughly tamped down. Pavers were expertly laid in the chosen pattern with frequent alignment and level checks. When this was completed, square pavers were laid along the outside edges and expertly mortared in place. Finally two benches were built at the outside corner of the patio and the corner and end pillars stuccoed to compliment the stuccoed exterior of the house. When the patio and benches were completed, the crew thoroughly cleaned not only the yard but also a covered porch that runs the width of the house. I am impressed with the skill, efficiency and work ethic of the crew that worked on this project. Mr Cutler stopped by several times to check on the crew and my satisfaction as the work progressed. We are very pleased with our new patio and corner seating area. My adult son stopped by the day after the work was completed, walked around checking out the workmanship while repeating, and quot;Good job. Good job.and quot; He walked to my side and said, and quot;They did a really good job!and quot; I've asked Mr Cutler to put in a citrus tree and have a couple of other improvements in mind which I'll not hesitate to entrust to Cutler Landscaping.

It went well. His workmen were great. Very polite and did good work while cleaning up each night. We were very pleased and would recommend him very highly.