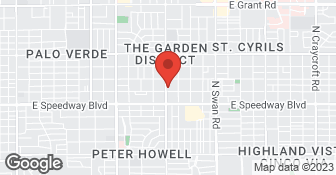 Great! When they first installed the door, they found they couldn't get these track marks out of the glass when they cleaned it up. So, they reordered a new glass door and brought that one out and it's beautiful!

Brandon did the measuring, price quote and install. He discussed the pros and cons of opening options, hinge options and pricing and saved me a few hundred dollars. I asked if the job could be rushed since I had to leave town soon. Office staff was great in confirming that they could rush the job and do the install before I had to leave. Brandon returned to do the install and with he and his partner I had a new, custom-fitted shower door that looks beautiful. I would recommend them.

Description of Work
I needed a new glass shower door for a recently remodeled master bathroom.

Brandon and Andrew made two trips to my home. The first was to measure the opening for the shower door to determine the type of door which would meet my specifications and the price for such. I was called within 48 hours with the price -- very reasonable for such a product. I ordered the door over the phone. It was made and then installed (by Brandon and Andrew) in two and a half weeks. The measurements for the door were perfect --with a 1/32nd of an inch tolerance. The installed door looks like it was always there. The removal of the old door, caulking, etc. was such that one could never tell that anything else existed there before. I could not be more pleased. These two men are truly professional "artists."

Description of Work
I wanted an updated European-style glass door for my master bathroom shower.

Description of Work
I called this company recommended by my realtor to repair some windows and screens for my home sale. They came that week and said they would have a quote ready for us that day or the next. No call. I call them and they told me they would have the quote ready by 5pm. No call. I called again the next day and left a voicemail. No call. I finally called another company and got another quote right then and there. I called them again to see if they could beat the price and the manager said he'd call me right back with a quote saying he was, "working on it right now". No call still. He called me the next WEEK asking for my email address to send me the quote. My inbox has yet to see an email from the company. This has been going on for three weeks. Needless to say I am going with the other company and will notify my realtor not to recommend this company to any more clients.

I paid one-half of the work order on August 20, 2013. All patio doors and 18 of the 21 fixed glass units were installed and 3 more fixed and 3 additional sliding windows had not yet been installed as of June 11, 2014. There have been problems with scratched glass that had to be removed and replaced after installation, mistakes in orders that had to be redone, errors in measurement and manufacturing that could not be redone, many delays, promises, plans, and agreements not kept, schedules not kept, and a sudden and unexpected request for a partial payment before completion of the order. The original order called for a color match betweem the doors and windows, but the doors were manufactured, delivered, and installed before I discovered that the glass did not match. Between March and June we were repeatedly told that the remaining windows were on the way or would be delivered the following week and that they would contact us ahead of time. Preparations were made on the basis of promises, yet no one arrived. Calls, letters, and e-mail messages were never returned. Promises to return calls and follow-ups went unfulfilled. Finally, on June 11 we informed the company that we were terminating our relationship with them for lack of performqance and apparent abandonment by them. It's a marvel that this company claims to have been in business since 1966.

The original call I made was quite some time ago. I live quite far from their location so they asked if it was OK if they waited until they had another job in my area to come out. I said that would be OK and did not hear from them for so long I thought I never would. They called this morning and asked if they could stop by this afternoon. The two men who came by were pleasant and they worked on the door to try to fix it but were only able to partially fix it. They said they needed to go back to the office and check into the problem a little more to find out if the door could be repaired or if it needed to be replaced. They are suppose to get back to me later this week. They did not charge me anything for the time they spent working on the door and if they get back to me as the promised I will follow through with having them do the work. I did check and found out that they are licensed and bonded.

Description of Work
He came out to see if he could repair our shower door or if it needed to be replaced.

They did an excellent job. Their service was prompt. They were friendly and very knowledgeable. They did a good job and they cleaned up after themselves. We are really happy with the work. The noise from the street is a lot less because it is a doubled paned glass.

Description of Work
We had glass replaced. We had a couple of plain glass put in and it was done by Columbus Glass. They upgraded the house windows about a year ago.

Description of Work
Don't bother! I contacted Columbus Glass three weeks ago. They came out, took measurements and stated we would hear from then in a few days. A week layer we contacted them. They claimed some sort of oversight and pledged to get back with us the next day. It has been nearly two weeks since that failed commitment. This appears to be a good indication of the work we could expect from Columbus Glass, so we'll be taking our business elsewhere.

I didn't ask for an estimate, and when the service man called his office for a cost, it came to $120. I thought that was pretty high for the work performed, but had not asked in advance, so thought it might be minimum for two men. Today, 11/17/09, the owner called me and said ther had been a mistake and they were refunding $40, as their minimum is $80. He put the mistake on himself and didn't fault his workers, a very ethical man. I highly recomend them and will use them again as needed.

Description of Work
Two repairmen put new rollers on my sliding door. They we very professional and prompt. The door works like new.

Andy's American Glass currently has 7 employees, we offer mobile service for most jobs, we also have a 24 hour emergency board up service, Andy's will also give you a 50 dollar cash rebate if we replace your windshield thru insurance and you have 0 dollar deductible. We will initiate your claim to your insurance company for you. Andy has more than 35 yrs experience in the glass industry in Tucson.  …

Bonded
Insured
All statements concerning insurance, licenses, and bonds are informational only, and are self-reported. Since insurance, licenses and bonds can expire and can be cancelled, homeowners should always check such information for themselves.To find more licensing information for your state, visit our Find Licensing Requirements page.
General Information
Free Estimates
Yes
Eco-Friendly Accreditations
No
Payment Options
Check, Visa, MasterCard, Discover
Senior Discount
No
Warranties
Ask for details

How is Columbus Glass and Screen overall rated?

Columbus Glass and Screen is currently rated 4.2 overall out of 5.

What days are Columbus Glass and Screen open?

Columbus Glass and Screen is open:

What payment options does Columbus Glass and Screen provide

No, Columbus Glass and Screen does not offer eco-friendly accreditations.

Does Columbus Glass and Screen offer a senior discount?

No, Columbus Glass and Screen does not offer a senior discount.

Are warranties offered by Columbus Glass and Screen?

No, Columbus Glass and Screen does not offer warranties.

What services does Columbus Glass and Screen offer?