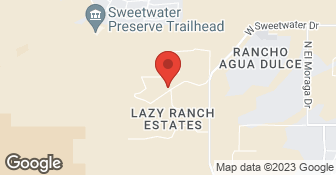 Cinderella Cleaners is a home cleaning services. We serve Tucson and surrounding areas. We have been in business since 2009. Our goal is to give our customers the highest quality cleaning services along with exceptional customer service. We look forward to earning your business! Book with us online or feel free to give us a call today!!...

Cinderella Cleaning has been our cleaning business of choice for several years now. Always professional, always thorough, and the friendly staff get the job done right- the first time. Highly recommended!

I have used Cinderella Cleaners for over 20 years and have always been a satisfied customer. The employees are carefully selected and provide top quality cleaning. They are very efficient, professional and respectful of me and my household contents. It is a pleasure to have them clean my house. After they clean my house it is “happy house, happy me.”I would recommend Cinderella Cleaners to anyone without reservation. Ruby Ludwig

The girls are very efficient, time sensitive and thorough. What impresses us most in addition to these qualities is that they actually care who we are.

Representative was one of the first to respond to my request and immediately made an appointment with me to provide an estimate, but on the day of appointment did not show up. I texted to ask if they were still coming and representative called then, saying that they don't provide services in my area. Seems since my address had been provided and there are maps, they might have known that before booking an appointment. I booked more than a week ahead and did not book anyone else in the meantime, so now I have to start over.

Cinderella Cleaners is fantastic! They did an incredibly detailed job, cleaning the entire house from top to bottom. We’re particularly impressed that they were able to make our stove and oven shine like new again! We highly recommend Cinderella Cleaners and will definitely hire again!

I wish I could share pictures for starters so this doesnt come off as me being "that guy". Had a manager come in and walk the house with us. She made big promises about what her staff could do for us. One hallway, living room, dining room, kitchen, two bathrooms, and a den. What they cleaned was cleaned well. It was the oversights of the staff that blew me away. They were here for five hours. Dust build up on fixtures not even dusted in the hallway. Splatter marks down the side and front of oven and refrigerator. Top of wall mounted oven not even wiped down much less cleaned. Cabinets weren't even touched despite her focusing on that heavily during the consultation. Stove knobs filthy with spillage. Back door black with hand marks not even looked at despite that rooms floors being cleaned to perfection. So again, what they cleaned was cleaned well. It was the items they ignored which really blew me away. Was told during consultation, two cleaners will be here for six to eight hours at 45 an hour. Wouldnt cost more than $360 at the very most. Her cleaners on the day of the job rushed out of here after five hours talking about needing to be somewhere else. Yet we were conveniently charged $360 for the full eight hours of work she quoted. When asked what happened to two workers at 45 an hour I was told well those are billed hours you got a discount at 360. It should have been 10 hours apparently. Not explained that way during the consultation in any way shape or form. It was simply put, I will send two workers for 45 an hour. Bottom line if you could see the condition this house is in after a 360 dollar "deep clean" youd spend your hard earned money somewhere else. Thats not to mention we were told we would be billed the day of only to call them for four days after to clarify the bad service and the charges only to be avoided all week then to be told our consultation quote was not as it was explained come time to charge our card. Im a huge tipper and understand service can be a matter of perspective. Its not that these people didnt clean well it was the yes yes yes attitude on day one and the no no no attitude on the day we had to discuss our concerns. This was our first and only impression with this service. Avoid these folks like the plague.

Aide & her employees have helped us probably 4 years. We love her! We can & do depend on her and her people & she hasn't let us down. Very responsible, works hard to get outstanding employees & English speakers. Once she finds them she pays at the upper end of the pay scale for residential cleaners in order to keep them, & that gives me stable, trustworthy workers in my home instead of frequent employee turnovers. I highly recommend Aide and her business. Cinderella Cleaners. She works very hard for everything to be right!