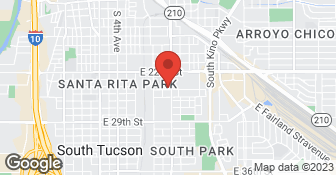 There is a monthly fee for the service. We can call them whenever there are problems. I had to call them when the power was going off during the remodeling of our house. Everything shows up in their monitoring systems. They acknowledge that and work around easily with our schedules. They are reasonably priced and professional.

Central Alarm has been very responsive. We had some trouble when they installed it because they told us that the motion detector wouldn't pick up the cat and she set it off twice which was really kind of a pain. One guy they sent to relocate it didn't know what he was doing, but then they sent someone else who actually figured it out and it was fine. It has gone off by mistake a few times and they have been good about walking us through resetting it for other people. Their not cheap because we have to use their monitoring, but they have been very professional, responsive, and quick. I really don't have any complaints about them.

This was the most expensive of the 3 estimates I got, perhaps because it was a cellular technology-based system rather than being wired into the home phone system. ($1800 for a 1400 SF house). The explanation of how to use was very good. He had good suggestions on placement of control box and motion detector.. Contract included one year of monitoring, done by local firm. I went with a system that was cheaper to install and that could install within my very short time frame.

Description of Work
Gave me an estimate for a home alarm system. Came to the house within a day of my call and gave clear helpful information.

It went very well. The work was more complicated than I think the technician expected. Some wires had been damaged, and the problem had to be located. They persevered. When for some reason my signal was crossed with that of a neighbor, a technician came on a Saturday. The problem was resolved the following Monday.

Description of Work
The house was already wired, but the system hadn't been used. Keypads were added, and some remote sensors were installed.

THIS COMPANY WAS VERY REASONABLE WITH THEIR PRICE. THE GUYS THEY SEND OUT TO OUR HOME ARE VERY FRIENDLY AND RESPECTFUL. WE ARE EXTREMELY HAPPY WITH THE SERVICE THEY PROVIDE TO US.

Description of Work
CENTRAL ALARMS COME ONCE A YEAR AND CHECKS MY ALARM.

WE WERE PLEASED WITH THEIR WORK. THEY WERE VERY COURTEOUS. THEY WERE VERY HELPFUL EXPLAINING HOW TO SET THE TIMER ON THE ALARM SYSTEM AND THE SECURITY GATE. VERY POLITE.

Description of Work
THEY INSTALLED AN ALARM SYSTEM IN OUR HOME. THEY ALSO INSTALLED A SECURITY GATE AROUND OUR HOME.

THEY ARE EXCELLENT! I AM A BIT FORGETFUL, SO THEY CALL ME OFTEN. THEY ARE REALLY ON TOP OF THINGS. IT MAKES ME FEEL SAFER IN MY HOME KNOWING HOW WELL THEY ARE ON THE BALL. THEY ARE VERY PROFESSIONAL AND CARE ABOUT MY FAMILY'S SAFETY.

Description of Work
WE HAVE THEM MONITOR OUR ALARMS.

SO FAR WE HAVEN'T HAD ANY PROBLEMS WITH IT. THE MEN WHO DID IT WERE VERY FRIENDLY AND THEY ANSWERED ALL OF OUR QUESTIONS FOR US. MY WIFE FEELS A LOT SAFER NOW, AND THEIR PRICE WAS AWESOME.

Description of Work
THEY HAD TO INSTALL A NEW ALARM SYSTEM.

I THINK THAT THEY DO A PRETTY GOOD JOB FOR THE TIME BEING. I HAVEN'T EVER HAD ANY PROBLEMS, SO I GUESS I REALLY DON'T KNOW IF IT WORKS OR NOT. I LIKE THE COMPANY ALL IN ALL THOUGH.

Description of Work
THEY MONITOR MY HOME SECURITY SYSTEM.

THE SERVICE PROVIDER DOES AN AMAZING JOB ON MAKING SURE THAT MY HOME IS ALWAYS SAFE AND SECURE. I HAVEN'T HAD ANY PROBLEMS WITH IT SINCE WE HAVE BEEN WITH THIS COMPANY. I AM VERY HAPPY WITH THEIR SERVICES.

Description of Work
I HAVE MY ALARM SERVICED ONCE A MONTH.

Zona Automation is a full service home automation company, specializing in audio, video, networking, surveillance, security, and lighting. Family owned and operated with over 15 years experience in the home theater industry. No job is too big or too small for the Zona Automation team!  …

CENTRAL ALARM INC is currently rated 4.9 overall out of 5.

No, CENTRAL ALARM INC does not offer eco-friendly accreditations.