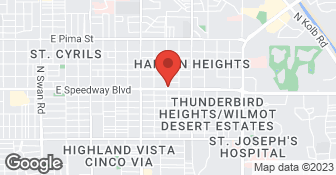 Cathey's Vac & Sew is committed to serving Tucson and Southern Arizona with the finest products and service available anywhere. We sell and service the finest quality sewing machines and vacuum cleaners in an atmosphere of creativity and reliability, unsurpassed in the industry. Catheys also offers complete home theaters and audio home equipment. Products and services include: New and used sewing machine sales and repair Specialty threads Sewing cabinets and furniture Sewing and craft classes and events Vacuum cleaner sales and repair Our goal is to create demand for more creative uses of sewing machines and sewing related items and by providing education on the use and care of vacuum cleaners and related products. We also have factory trained technicians. Call Cathey's Vac & Sew and find out how creativity and education "Seam" together....

I spoke first with an employee at Cathy's Sew and Vac and explained my problem. He suggested to try two things to try; buy new thread, and buy new needles. These two suggestions worked! It would have been easy for him to tell me to bring my machine in for service $$, but instead, troubleshooting first was the way to go and only cost me new thread and needles. I am very impressed!!

Description of Work
My Bernina needed a servicing.

They did a great job at the price quoted and even finished early. My machine again sews like a dream and I'm very happy.

Description of Work
Sewing machine cleaning and repair (if needed).

The thing I like about Cathey's is their no-nonsense approach. I brought in an old Pfaff machine that I wanted to give to my son as a basic machine. They gave me an estimate that included fixing a fancy-stitch feature that my son didn't need and wouldn't ever use. When I asked about it, the repairman told me that the straight and zigzag stitches would work fine even if we didn't fix the fancy-stitch option. I chose the less expensive, but more practical, option and the repairman continued to be cheerful and agreeable and finished the job promptly and well.

The power motor on my canister vacuum stopped working and I saw that the cover of a wire was exposed. I brought the whole vacuum into Cathey's Vac & Sew. I had to wait a few minutes while the person behind the counter helped someone else. Then I explained the problem to him and said that I'd also like to trade the vacuum in for an upright. He looked at the power motor, told me what the repair would cost, and asked about the floors in my house. The floors are all tile and I have a Persian carpet in the living room. He explained that the vacuum cleaner that I have is best for those kind of floors and does a much better job than an upright; that I should use the power motor only for the carpet and the floor attachment for the tiles; and that the vacuum I have would sell for about $450 today (about $200 more than I paid for it years ago). He was knowledgeable, efficient, and obviously was not in a hurry to sell me something I didn't need. He told me how long the repair would take and that he would call when it was ready. He called a few days later to say that they were a bit behind and would need to take the weekend rather than having it ready by Friday, then called Saturday to say it was ready. I appreciated the call to let me know that they might be late, even though I wasn't expecting it to be finished that soon anyway. The cost was exactly as projected, $35.

Description of Work
Fixed the power motor on my vacuum cleaner

It would take them two extra days to get to my home, so they offered me a loaner to take in the meantime. They were so nice, and so great to work with!

Description of Work
One of the outlets in central vacuum was not working, so I had them come out to fix that.

Wonderful. I couldn't have been more pleased.

The repair cost was very high and was recommended to purchase a new one. The salesperson offered to give me a floor display with some $ for my non-working vacuum. I declined the offer as I did not prefer the model of the vacuum. The salesperson was very helpful and I would refer back to Cathey's if need be.

Description of Work
Cathey's Vac & Sew evaluated repair for my Dyson vacuum after waiting in line some minutes.