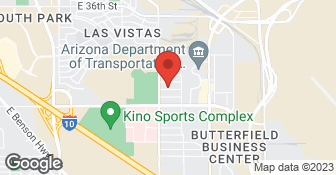 Angie's List Super Service Award for the past 4 years! Baker's Mobile-Aire is family owned and operated in Tucson since 1972. We believe in providing a fair, honest service to our customers at a fair, honest price. We have an $95.00 diagnostic fee that covers the time to get to your home as well as the time to diagnose your systems problem. Once the problem is found, our technician will show you what the repair will cost up front before any repairs begin. We also offer free estimates for air conditioning and heating installation, and evaporation cooler replacement. We do not use subcontractors, all work is performed by our staff....

Heath’s Air is your go-to resource for dependable heating, ventilating, and air-conditioning services. With 25 years of experience, we have provided Arizona homeowners with quality heating and cooling services. Our team is ready to help you!  …

ACS Air Conditioning Services, opened its doors in 1990 and quickly became Tucson’s leading commercial air conditioning company. Since then, ACS has become Arizona's number one Trane dealer and Comfort Specialist. Over the years, ACS has continued to receive several industry awards for service and excellence in both residential and commercial heating & cooling. All while developing and engineering cutting edge technology in commercial air systems and remaining focused on creating the best customer service and support in the industry. We not only believe in what we sell, but most importantly we stand behind it with our "100% Client Satisfaction Promise"; "If at any time during the first 60 days of residential installation you are not 100% satisfied with the performance of the equipment, we will (within 30 days of your request) remove the system and refund the entire amount of the contract." Follow that with a lifetime guarantee on your units' service and duct-work. 24hr emergency service, Angie’s List special pricing. Additional DBAs - A C S Air Conditioning Services. Additional contact names - Stephen Rogers, Award winning. Senior discount not applicable towards install or new units.  …

Spoke at length with the owner before scheduling service, and owner said " I'm sending the technician James that I send to my family when they need service." James arrived and checked the system but suggested the Capacitor be replaced and a part that runs from $12.00-$28.00 was charged $225.00 for the capacitor. Grossly overpriced. ( I checked on line for prices after he left) When he installed the capacitor, James didn't place the metal bar across the capacitor to secure but left the capacitor in the box and placed it unsecured in the unit. Didn't check the inside unit in the garage. I didn't call them back to do any other work, and would NOT recommend. Very disappointed that this business is on Angie's list, as I use Angie's list exclusively when looking for any type of service.

I'm very sorry that one year after your service was performed you have any feelings of improper or inadequate service by our company. We welcome all feedback from our customers, it helps us grow and learn. We strive to provide the best service we can and we have earned all of the other A ratings listed on Angie'[Member Information Removed] List for a reason. As for your findings on the internet in regards to the pricing of your capacitor - I'm sure you understand that anything can be found cheaply on the internet. I can guarantee that the capacitors you were looking at were not American made multi capacitors carrying a 5 year warranty. I can also guarantee that those companies on the internet would not come back to your home and immediately replace your capacitor if by some chance it failed during the warranty period. We use flat rate pricing so the price you paid included the labor and taxes not to mention that you were making a great choice by supporting a small local family business, not some faceless entity on the internet. I welcome you to contact us so we can make this right for you, we stand behind all of our work and will be happy to discuss this further
5.0

I called Baker's Mobile Aire because my AC, which is only 5yrs old, was not cooling. While I was talking to the office, they said a Tech had just finished another job and could be here in 20 minutes. All other companies I called were 2-3 days. James came and immediately knew what the problem was. I needed 5 pounds of coolant added to my system($475 + service call fee of $95). I was glad he fixed my unit and had him add a dye($250) to see if I had a leak. The follow-up appointment for the dye check was three weeks later. There were NO leaks found. The reason for dye was that three weeks prior to my AC not cooling, I had another company(Alaskan) come out and do a maintenance check. All they wanted to do was sell me a service contract and mentioned nothing about my AC refrigerant being low, but that my AC coils needed cleaning. According to James, my coils were fine. So, I highly recommend Baker's Mobile Aire.

Description of Work
AC not cooling

Thank you for the great review. We are happy to have the opportunity to help shed some light on the issues you were having. The trust customers like you place in our company is greatly appreciated and we look forward to serving you in the future!
5.0

Very efficient. Found a capacitor below spec. When I asked if cheaper for me to buy and replace it or have them provide and install, tech was VERY honest and said cheaper for me to do it. I like honest techs. Baker's Mobile Aire Inc is the only company I deal with for my home heating and a/c service.......has been out at the house at least 4-5 times for preventative checks.

Description of Work
A/C Check Up

Efficient, thorough check-up. Most of all, did not try to "up-sell" or use fear tactics. As repeat and Angie customer, gave me 10% off. To note, my run capacitor slightly out of tolerance, showed me capacitance reading, but did not pressure me to act now.

Excellent. Our house has a vertical dryer vent. Apparently, it hadn't been cleaned since our house was built in 2001. The lint pulled from our vent filled an entire shop-vac tub! We were probably headed for a house fire. I highly recommend this service. The man from Mobile Aire was in and out in about 45 minutes. He explained what he would do, he got right to work, and we put everything back the way it was and tested the dryer when he was done. He showed us all the lint he had extracted, and explained that one of the the leading causes of house fire in Tucson is dryer-vent build-up. Out of curiosity, I checked online. According to Tucson Fire department, the leading cause of house fires in this area is unattended cooking, but according to the national Fire Protection Association, dryer fires are a common cause. Here's an extract of their report: Report highlights In 2010-2014, U.S. fire departments responded to an estimated average of 15,970 home structure fires involving clothes dryers or washing machines each year. These fires caused annual averages of 13 civilian deaths, 444 civilian injuries, and $238 million in direct property damage. The vast majority of fires (92%) involved clothes dryers. The leading items first ignited in dryer fires were dust, fiber or lint (26% of total) and clothing (26%), while items first ignited in washing machine fires were part of the appliance itself, including wire or cable insulation (26%), appliance housing or casing (24%), and drive belt (11%).

Thank you so much for your business and the great review. We are glad to help give you a little piece of mind with your dryer vent cleaning. We hope you have a fantastic holiday season!
5.0

They are very honest, and they do good work.

I was totally impress with the response, customer care, expertise and professionalism. From the initial call thru arrival and followup you cannot ask for better. Marks phone response was beyond my expectation with his answers an they could be of help. James (tech) was another with a positive attitude "can do". His expertise is one to be recognized. He was able to diagnose the error an complete repairs. Quote for future services was completed an to be scheduled.

The guy who came was wonderful. He was skilled at his job, professional, friendly, and had a great attitude. Our dryer works great as a result of the service he performed. We would definitely use Baker's Mobile Air again.

Excellent! James was professional, thorough, friendly and efficient. In a busy A/C repair season, my request was promptly executed. I would use Bakers again.