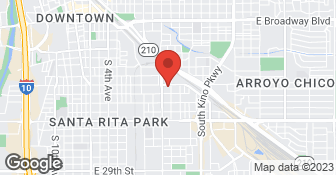 On March 3, 1980 a company was formed that would change the way all major appliances and products were handled and repaired. the goal of this fledgling corporation was to forever change the concepts of appliance repair and appliance technical representation/perceptions. through dedication and perseverance, we succeeded in creating and maintaining a service company that is capable and willing to fulfill the many and varied needs of major appliance manufacturers as well as individual customers. Award winning....

We are Tucson's experts for A/C, heating, and electrical. Commercial or residential. We provide service Done Rite. Competitive pricing Done Rite. Our decades of experience shows in the quality of our work .  …

#1 RATED HVAC AND PLUMBING PROVIDER IN SOUTHERN AZ. 24-HR EMERGENCY SERVICE. ALL INSTALLERS AND SERVICE TECHS AT OUR AWARD-WINNING COMPANY HAVE AT LEAST 10 YEARS EXPERIENCE! Guaranteed highest quality at an affordable price. Our team has well over 100 years of experience. We offer all major brands like Lennox, Trane, Rheem, and Amana. An A rating with the BBB.  …

I contacted Authorized Technical Service because there was silicone around the bulb (it was a different kind of light) and I did not want to break anything or cause any damage. I did not know if bulb was a pull out or screw out. The owner answered my call and was very nice. I told him my Model Number and explained my situation and he said he would check to see if he had the bulb and call me back. A couple days later I had a call from a serviceman to come to my house. I presumed he had the bulb to install. He came and unscrewed the burned out bulb and said that would be $80 which I paid. He said he did not have a bulb. He said I could get it at any hardware store. I went to Ace Hardware Store and Lowe's and they did not have the specific one. I did not know what to do. I called and emailed Authorized Technical Service and received no reply. I am 80 years old and on a fixed budget. Something is wrong here and I am very disappointed in the service that I received and that Authorized Technical Service is representing the KitchenAid company. I paid $80 to have the right light bulb installed in my microwave and the work was not done. My microwave still has no light.

Description of Work
External light burned out in my microwave.

We were very pleased. They were there when they said they're gonna be. He was very professional.

Description of Work
They fixed our dishwasher.

Great! The service provider was efficient and professional.

Description of Work
Replaced the power cord to the dishwasher under the manufacturer's recall program.

From what I read on several repair discussion sites, it appeared that electronic parts were no longer available for our oven. So I called ATS (an authorized Dacor servicer), explained how I shorted the oven and asked a technician if it was true that parts were unavailable. If so, then it would do no good to have him out to diagnose the problem. He said that some parts (specifically the relay boards) WERE available and likely the cause, so I scheduled him to come take a look. In less than 10 minutes, after merely fiddling with the key pad a bit, he proclaimed there were likely several parts damaged, but he did no in-depth diagnosis to pinpoint the problem(s). He said he'd call me the next business day after determining what parts were available. He did call and guess what, there were NO parts whatsoever available for that oven, just as I feared. I just wasted $75 and a morning at home for the service call. The positives--he arrived within the scheduled window, was courteous and did call back as promised.

Description of Work
I shorted out our Dacor oven. The error message indicated that the ERC (electronic controller) was fried.

Not great. They came out for 4 times before they figured it was a compressor. The part was back ordered and I had to keep calling to check on the part. Receptionist was not pleasant nor did she have any empathy with what I was going through. The only reason I would use again is because no one else works on Viking products locally.

Description of Work
My Viking outdoor refrigerator was not working

Fast and efficient. He diagnosed the problem as the motor which ejected the ice. He had the proper replacement part in his truck and had the problem resolved n less than an hour. We had fresh ice again within another hour.

Description of Work
The ice maker on our KitchenAid refrigerator needed repaired or replaced.

The repair went very well. ATS saw what was needed for the fix, ordered the part, then came and installed and checked to make sure everything was good. They are the ONLY ones we would call to fix an appliance!

It was covered under our insurance that we have in one of those appliance home insurance plan. We didn't have to pay anything. It took a while for Authorized Technical Services Inc to figure out what was going on so I had a couple different people come out. I mean, they were good about, you know, honoring their work and all that kind of stuff but it took a while to figure it out.

The technician knew just what it was & had it fixed in less than 15 min. No more squeak!

Description of Work
Our gas dryer was making a lot of noise.

The company dispatched Rocky to come to my home. He quickly diagnosed the problem. While he seems to carry lots of parts on his truck, he needed to order the proper replacement part. He returned after the part became available and popped it in. Rocky was very pleasant and know what he was doing. He was prompt, helped me work around my own busy day, and left the work site very clean. I wouldn't have know he'd been there at all. I'll keep the company's number on hand and will enthusiastically call them when I have another problem.

Description of Work
My Fisher Paykel dishwasher stopped draining. So I call for service.