With Angi since November 2016 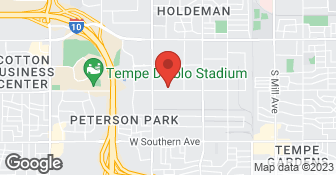 Description of Work
Patio and pool

On May 7th, 2019, we met with Brandon, a salesperson for this company regarding some improvements to our backyard. We went through everything and agreed to their quote and both parties signed a contract. We were told that we would be contacted by a project manager in two weeks and that commencement of work was 4-5 weeks out. This worked for us as we wanted the project complete by the second week in July After three weeks, when we had not heard from the project manager, my wife started calling to find out what was going on. After six weeks, my wife finally spoke with the PM who came out to take a look at the property. We were then told that instead of the approximately $6,000 we had been quoted and agreed to, the project actually was more than $11,000 but they offered to do it for $10,000. The salesperson accepted responsibility and tried to explain what he missed on the quote and why they would not honor the contract. We viewed this as a clear bait and switch tactic since we did not imagine they could be "accidentally" off by 95%. We checked with other contractors and found pricing closer to the original quote that Allied gave us. We decided to go with the new contractor since we no longer trusted Allied. I sent an email to the salesperson and copied senior management on Monday July 1st requesting my deposit back. While we would have liked them to complete the service at the quoted price, we just wanted our deposit back. We received no response to that request until we filed a BBB complaint. At that point, I was told that the check had been processed on July 1st. We did not receive it until July 9th, 5 days after the BBB complaint was filed. They also advised that we could use pavers under our hot tub, which I later found out would have voided my hot tub warranty.

Shea was awesome. On top of everything and had all the answers to my questions.

We are totally satisfied with their work, from sales to the final walk through. Pictures do not do justice to the transformation of the cool deck and patio.

Description of Work
Install Carvestone onto cool deck and patio.

Excellent workmanship. They were very professional and timely with their work. Everything was cleaned up when they left. Our patio area completely changes the look of our backyard.

Description of Work
We eliminated concrete lily pads and rock around our pool deck area. They filled those areas with concrete so that is was all one surface. Then we had the Carvestone done. We also had them do the side walkway and front entry, plus a small deck on the side. They connected the small deck to the larger one. We also opted for the large drain to keep water from pooling on the patio. It was a VERY big job.

Work was done in the time frame they quoted and very professional and nice crew to work with.

Very professional, on time. Cleaned up every evening. Explained in details what would happen and when.

I would like to thank Allied Outdoor Solutions for the magic transformation of my backyard (carvestone, pavers, retaining walls) and front entry way (carvestone). In my opinion, carvestone is the most beautiful and practical option for the treatment of concrete surface. The quote they offered to me was very accurate and no hidden charge at the end. The crews were very helpful and professional. They did everything I asked to make their customer happy. Scott, project consultant, was trustworthy and always respond my email very promptly. I really appreciate their service and definitely recommend this company to my friends.

Day & Night is a full-service Air Conditioning, Heating & Plumbing company in Phoenix, AZ. We have earned an A+ rating with the Better Business Bureau. Something we work very hard everyday to keep. We believe the main reason we've been in continuous operation since 1978, is because we treat our customers like family. If your air conditioner is in need of repair or service, give us a call to find out how a customer should be treated. We offer a best price guarantee and a buy back guarantee. We offer both Senior Citizen & Military discount. Call for details, we are standing by!  …

We are epoxy flooring professionals and specialists providing the Phoenix Valley with a top of the line epoxy floor designed to last a life time. We have a time tested 5 step process to ensure this is the case.  …

Allied Outdoor Solutions is currently rated 4.2 overall out of 5.

No, Allied Outdoor Solutions does not offer free project estimates.

No, Allied Outdoor Solutions does not offer eco-friendly accreditations.

No, Allied Outdoor Solutions does not offer warranties.