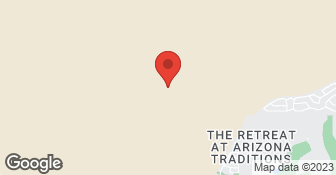 Welcome to Sprinkler Dude LLC! We are a local family-owned company specializing in ALL aspects of Sprinkler and Drip Irrigation servicing and repair in the west valley. We purposely keep our crew small to ensure attention to detail and provide the highest quality workmanship. By utilizing a consultative approach to customer service, we offer solutions tailored to individual customer needs

Perfect, he did a great job in just a short time

Description of Work
George fixed a nonstop leak on my sprinkler system, great job done quickly great guy call him again yes I will recommend him to anybody

Job went very well. Squeezed my appt. in (thank goodness!) due to my inability to stop the timer from running. Sprinkler Dude was professional and did a beautiful job replacing the timer along with a broken shutoff valve! Would definitely hire again.

Description of Work
Sprinkler timer died; had to be replaced.

It went very well. Explanations were clear and helpful, and suggestions were made to help me better maintain the system in the future. All of the people with whom I had contact were very courteous and helpful.

Description of Work
My drip system was not working properly.

George repaired a break and restored water to the two plants that had lost it. In addition to solving my problem, he checked all my plants and redistributed the water supply to each as he thought it was needed. All my plants are now looking much better. George knows what he is doing.

George was very professional and did a great job.

George showed up in the time frame that was promised. He gave me a reasonable price and finished in a very short time. He replaced the landscape in same pre-work condition and checked all stations to make sure they were operating efficiently.

I have worked with Sprinkler Dude before. Great service. Will call him back.

He showed up on time and completed everything in the time he allotted.

Description of Work
George removed and replaced my whole backyard valve system with new equipment and a new timer. He also replaced all of my pop-up heads with new, better heads.

I love this guys work. Does it exactly how I would do it. Thorough, high quality, cleaned up and left the yard nicer than before. Check my pressures too.

Excellent re-do of drip system in rose bed. MUCH BETTER! arrangement of drips and an increase in number of emitters than what was originally installed 5 years ago. George had very good suggestions and also gave extra helpful info on my drip system, in general.

Description of Work
re-do of drip system in rose bed

Sprinkler Dude was very professional and knowledgeable. Quickly identified location of underground leaks including at least one that I was not aware of. Repaired leaks and retested system to make sure that all leaks had been eliminated. Very satisfied with service and would hire again.

Description of Work
Identified and repaired leaks in the irrigation system underground piping.

We were in urgent need of sprinkler repair so we called the Sprinkler Dude. The electric line from the controller to the valve box was cut during the removal of a large tree in the backyard and we needed it fixed quickly in order to complete backyard landscaping. Spoke with Carrie who handles the scheduling and she graciously squeezed us into their heavy schedule. Owner George and a helper arrived on time. Both are friendly, courteous and knowledgeable. George found the problem and then gave us alternate ways of solving it. He said he could hook up the old controller or, if we preferred, we could purchase a new one. He gave us estimates on two different controllers that he had in his truck. We purchased the new controller and he immediately installed it, programmed it for us and instructed us on its functions. We were impressed with his work, so we scheduled another appointment for him to check out the entire system. George spotted a major underground leak in the backyard, which would have to have fixed before any landscaping could be completed. Carrie, once again, quickly got us on his schedule. During the second call, George solved the underground leak, inspected all sprinkler heads and drippers, replaced or repaired whatever necessary. When our system needs a complete overhaul, we will definitely call Sprinkler Dude. He clearly explains what he thinks should be done and he does it with no upselling. We have also recommended him to our neighbor and to our daughter to check their systems.

I contacted Sprinkler Dude based on a neighbor's recommendation. George (aka Sprinkler Dude) arrived promptly at the appointment time this morning, diagnosed the problem, gave me a written quote for a total repair price of $320 total for rebuilding 5 valves including his travel and service call costs. I approved the quote, and he and his assistant did the job within an hour or so. One of the problems he found in my sprinkler system was an unrecoverable pebble lodged downstream of one valve from a previous sloppy repair job. The pebble diminished the flow but doesn't prevent the sprinkler circuit from operating. In case I wasn't satisfied with that state of affairs, he left me with a reasonable written quote for a complete replacement of the valve manifold to remove the pebble. In this quote he included a credit for the initial service call and nearly all the work already done. George also made some other practical recommendations for improving the performance of the poorly designed sprinkler system. In short, this is the kind of person I like to do business with. Good job, George!

Description of Work
Diagnose and repair a malfunctioning residential sprinkler system that consists of 5 valves and circuits.

Overall George was fantastic, friendly, professional, organized and complete. He was not rushed and did little extras to be sure all was working properly. I give George the highest recommendation

Very good service. Arrived at the agreed-upon time. Found problem and gave quotes for and explained various options. Work done promptly, no problems in the month since work performed.

Description of Work
Found problems in sprinkler valves and replaced them.

Good work, good price. No up selling pushing for more work like many others. Will use in the future.

This guy is the real deal , he will definitely be my "new" sprinkler dude at rental properties , very professional and priced right!!!!!

They came out on time and did an outstanding job. They are very fairly priced and I will hire them again when needed.

I noticed two wet spots in the yard over the weekend that could only be leaking irrigation pipes. On Monday I went right to Angie's List to find a local service provider and came across Sprinkler Dude. Precisely what I needed! I left a message with the office and my call was returned within the hour. An estimate was provided based on my description and an appointment scheduled with a two hour window the very next day. George called once he was 15 minutes away and was able to make it a bit earlier than scheduled. I showed George and Thomas what was going on and they got right to work. Not only did they patch my leaks, they ran the water long enough to check for any other obvious leaks. They also took the time to restore the yard to look like nothing had ever happened by raking back the gravel and then hosing the muddy areas. I really appreciate that level of professionalism! My drip system is over 15 ears old and will need replacing soon, George gave me a ballpark estimate on that and they may be hearing from me once we get to that job.

We had some sprinkler zones that weren't watering properly. We called Sprinkler Dude to setup an appointment for a check-up. We were given an appointment window of 2 - 4. George (owner) and Thomas arrived shortly after 2. George checked the electrical connections in the sprinkler panel and determined all was well. He then checked the valve boxes and determined a couple of the valves needed to be replaced. He explained exactly what the problem was and provided us with an estimate to fix. We had him replace all 5 valves and it was great as he had the required parts on his truck. He and Thomas were able to replace the parts and test out all zones to ensure they'd function via the controller. The work was completed in an hour and they did a great job - in this horrible heat! We will definitely use Sprinkler Dude again!

Description of Work
Checked out existing sprinkler system and put everything back in working order.

The guys called before coming over and were actually early. They assessed the situation and delivered an easy to understand quote. They got the job done quickly, neatly and left the work areas looking 100% better than when they arrived.

Description of Work
Called to have some old valves replaced. In addition, we had three areas that have caused us trouble for years. Spots where there were no less than 10 repairs I had made over the years. They cleaned up those areas and repaired them the right way.

I can't say enough about George. He was on time, professional and very easy going. If the need ever arises where I need my irrigation system worked on I will call Sprinkler Dude.

Sprinkler Dude provided excellent service! He was punctual with the times given to me and was fast and efficient. Sprinkler Dude also was kind and patient enough to help me with setting and explaining the sprinkler box in my new home! Not to mention his friendliness and great pricing! I would definitely recommend him to anyone!

Description of Work
Sprinkler Dude fixed a couple leaks I had in my drip system, capped off unused drippers, and also set and explained my intimidating sprinkler box!

At Donley Service Center, the health and safety of our customers and employees is our top priority. We are following the guidelines set by the Centers for Disease Control (CDC) to ensure the safety of our customers, technicians and staff. Our team is keeping a close eye on any updates or changes and we will adjust our protocols as needed. We professionally install, service and repair HVAC systems and provide all plumbing services including water heaters, water softeners, drain cleaning, and re-piping jobs of all sizes. Donley Service Center has been serving the Valley since 1976. We are a two time winner of the Better Business Bureaus Ethics Award. Check out our A+ rating on the BBB website. All work is fully guaranteed. We have more than 60 employees dedicated to our goal of 100% customer satisfaction. Experienced technicians that receive over 120 hours of continuing training per year.  …

Bonded
Insured
All statements concerning insurance, licenses, and bonds are informational only, and are self-reported. Since insurance, licenses and bonds can expire and can be cancelled, homeowners should always check such information for themselves.To find more licensing information for your state, visit our Find Licensing Requirements page.
General Information
Free Estimates
No
Eco-Friendly Accreditations
Yes
Payment Options
Check
Warranties
Yes

Sprinkler Dude LLC is currently rated 5 overall out of 5.

No, Sprinkler Dude LLC does not offer free project estimates.

Are there any services Sprinkler Dude LLC does not offer?