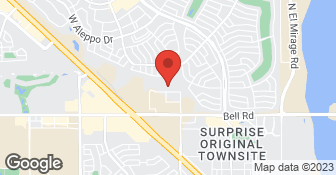 Champs Family Automotive is your neighborhood automotive and diesel specialists in Surprise, AZ. We bring back the integrity, trust and fair pricing a customer should have with their mechanic, while providing state of the art workmanship. Our ASE certified technicians do oil changes to major engine repair. You name it, we do it! We also offer evening vehicle pick up and drop offs. Our services include: • Air conditioning and cooling systems • Brakes and ABS systems • Carburetor • Clutch and transmission • Computer and diagnostics • Emissions and exhaust systems • Electrical • Suspension and hydraulics • Fuel systems • Drive train We use the latest computerized equipment to diagnose and repair all import and domestic cars. We offer service and maintenance on RVs in addition to tires and aftermarket products and accessories. Towing is also available. Experience our competitive prices and solid mechanical work. We look forward to serving you! Call today to schedule an appointment

Description of Work
The folks at Champs were very helpful in rebuilding my son's cylinders on his Chevy truck. We were quoted almost $2000 just to diagnose the problem from a Chevy dealership, and Champs diagnosed, installed and warrantied their work for the same price. They are a no nonsense shop that won't take advantage of you. Even though they're a bit of a drive, we'll be using them in the future

Description of Work
They did a great job on my diesel pickup truck. They turned around quickly and the truck runs great.

Description of Work
Repaired evap hose. Tires. Oil change. |The only thing to watch out for is their $99 diagnostic fee. They are clear that if you only have a small service done they can't roll that fee in. I assumed, incorrectly that it would be rolled into a $500+ service. They only reduce their fee by $52. I guess you need to have around $1000 worth of work done to make that fee go away completely.

Check engine light came on the night before Thanksgiving. Called in the morning the day after Thanksgiving and they said they would fit me in in between others already scheduled. They were extremely busy and I was thankful they were even open the day after Thanksgiving, as a lot of shops were closed. It took a while to be acknowledged when I arrived, as the person was busy on the phone and then made another phone call while I waited. Everything was very prompt and courteous after the initial acknowledgement took place. Diagnosis was low engine oil caused the light to come on. They provided an oil change, test drove the car to make sure the light wouldn't come back on, and only charged $20 for diagnosis instead of regular $55. They informed me that provider of last oil change did not put proper quantity of oil in the car, as there was no oil leak and had only been driven 2,000 miles since last oil change. They have a shuttle too, so I was able to drop the car off without involving someone else to help me. Great experience, decent price, and I will definitely use them in the future.

Description of Work
They diagnosed and fixed check engine light.

Have dealt with both Champ and Josh, both very personable, down to earth,spell out clearly the service, I'll go back again.

The cost of the service was competitive. They were very efficient and very helpful. They gave me some advice without any charge on another vehicle that I had. The work that they did turned out really well. They did an excellent job.

Description of Work
The last time that I used Champs Family Auto was about September of last year for replacing an electric window motor for me.

**We want to provide you with a personal quote! Please call us at our shop.** We are a family owned business since 1970 with expertise in both foreign and domestic automotive repair. Bridwell Automotive Center offers great service at affordable rates. All of our technicians are ASE Master Certified and we are a member of the Better Business Bureau with an A+ rating. We are also rated as one of the Top 65 Automotive Repair Shops in the Metropolitan Phoenix area by Mark Salem, "The TV 3 Car Guy". At Bridwell Automotive Center, we are very proud of our reputation as one of the best auto repair shops in Scottsdale, AZ and metro Phoenix, AZ. We strive to have great customer service and continually take strides to make all of our customers happy each and every time we see them. We look forward to working with you and your automobile in the very near future. Tow Truck for: We service Scottsdale, Paradise Valley and the surrounding cities.  …

Ever wish you had a car guy in your corner? We're Business Ethics Award Winners. When you call 25th Street you'll talk to An ASE Certified Service Consultant, one who is also a long-time Master Technician. We provide ethical automotive repair, consultation, and long term automotive planning by providing the best possible service and products for you. We provide this service with a high level of integrity, fairness, sensitivity, honesty, trust and trustworthiness.  …

Bonded
Insured
All statements concerning insurance, licenses, and bonds are informational only, and are self-reported. Since insurance, licenses and bonds can expire and can be cancelled, homeowners should always check such information for themselves.To find more licensing information for your state, visit our Find Licensing Requirements page.
General Information
Free Estimates
Ask for Details
Eco-Friendly Accreditations
Yes
Payment Options
Check, MasterCard, Visa
Senior Discount
No
Warranties
Ask for details

Champs Family Automotive is currently rated 4.9 overall out of 5.

No, Champs Family Automotive does not offer a senior discount.

No, Champs Family Automotive does not offer warranties.