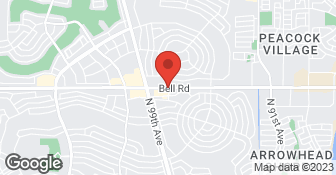 Sales and service of all Central vacuum systems...

Not too well. I called on April 5th and left a message again giving Monty 24 hours to respond or I was going to write a negative review regarding how he handles return calls. Monty did call me on April 6th and gave me the website of vacuum parts. Once he read my email today, April 7th, Monty sent me a text message as follows: "DO NOT EVER CALL ME AGAIN". Very unprofessional! If you are in the market for a central vacuum system be aware that if you needs parts or service, this is not the company to deal with!

Description of Work
Monty installed a central vacuum system in my home in January 2013. One of the wands cracked and we called three times within a two week period without a response.

Quickly unclogged the opening and gave good advise on what to do to maintain the system.

Description of Work
one of the vacumn openings was not working.

Showed up on time, diagnosed the problem quickly, had the parts he needed on hand, fixed the problem, and charged less than he estimated over the phone.

Description of Work
Central Vacuum Cleaner would not shut off

One outlet is still not working properly. Have contacted Monty and yet to hear back.

Description of Work
Overall system check. Some outlets were not functioning fully.

Each time I had an appointment, the scheduled time came and went. I called Monty each time he had a different excuse. He was running behind schedule the first two times he needed to reschedule for another day. He never called to let me know. Another day he was going to call to let me know a day and time. A week went by & I had to contact him. Finally, we scheduled the third appointment & he was another no show. I called Monty again & he said he forgot. I asked if I should find someone else to service my vacuum and he said he guessed so. Extremely unprofessional & rude!

Description of Work
Nothing!!! Scheduled an appointment 3 different times & each time Monty did not show up.

Monty had to cut a hole in the ceiling in the garage to access the loose pipe. He reconnected the pipe and repaired the drywall - quick, clean, efficient, professional. Would not hesitate to call him again.

Description of Work
Diagnosed the problem immediately, then returned a couple of days later to complete the repairs.

Monty scheduled service right after contacting him. He arrived on scheduled and replace motor. He asked me to test system for suction--worked fine.

Our central vacuum pressure was low. Monty came on time. He quickly diagnosed the problem. He got on the attic and reconnected and glued the air tube and change the belt . Our vacuum have normal suction pressure now. Monty is a honest and experience Technician. He did not overcharged or made up stuff to charge more.

Was very responsive, only had to wait about 30 min from phoning for the service to when he arrived. He made sure the repair was done correctly!

Description of Work
Replaced a bad switch on vacuum hose.

It went very well. Professional, Fast, Clean, Personable. Definitely will use him again.

Description of Work
Replaced a burned out motor.

He serviced my central vacuum. I thought it would need replacing since it is over 25 years old, but he said it only needed a thorough cleaning. The price reflects that I also bought some additional tool, which he recommended to help update the vacuum. However, he was low-key about it and didn't try to pressure me to buy anything. I was satisfied with the service and would use him again.

Description of Work
Serviced my central vacuum which had weak suction.

Monty explains everything he is doing and is very knowledgeable. He did a great job, and even fixed some minor items outside of what his call was for, and the price was unbeatable. A definite professional and great service performed.

Description of Work
Monty is very knowledgeable and fixed our system of a clog by a "superball" from a previous resident and troubleshot a wiring issue quickly. Systems works great now.

Prompt service appointment. On time, very professional. Will use again.

Very punctual, on both trips. Fair pricing and a neat clean installation. We could not be happier.

I called him, and he was able to come in 3 hrs far North to the foothills in Cave Creek because he was in Scottsdale. He came promptly, listened to the problem, assessed the problem, looked in his truck for tools to test. Tested everything, and knew exactly what the problem was. We had thought that something was in the wall blocking the air from sucking through the hose. He said it was the base of the hose--the contacts. He gave me a better head to use for the vacuum and sold me a hose that he had in his truck. My problem was solved. He also advised me to order a part online for the carpet head, which I did later. Now my vacuum is in perfect condition for the floors and carpets. Very nice guy!

Description of Work
The service call was the usual for all service calls, then I bought the hose that he had on hand for 120.00.

I was cleaning up a minor mess on a Friday and got out the vacuum to finish the job. When I turned on the vacuum system, the suction seemed to be not very strong and then stopped altogether. I went and hit the reset button on the unit in the garage, and restored suction, but the vacuum died 2 more times. The last time, I went into the garage and could smell a hot electrical smell. The vacuum no longer turned on at all. I called Monty at 3:30 pm and discussed the situation and told him that I thought it might be the motor. I set up an appointment for Monday morning. He arrived earlier than expected (after calling first) and diagnosed the problem, quickly replaced the motor with a new one and we tested the unit again. The vacuum began working immediately. I was very pleased with finding Monty on Angie's list after looking elsewhere on the internet for someone to check out my system and not being successful.

Description of Work
Monty replaced the burned out motor on Central vacuum cleaner system in my home.

Description of Work
They came on date and time promised. Monty has been in the business for along time and really knows what he's doing. He did the repair in approximately 1/2 hour. Monty was straight forward about the problem and the solution. No parts were needed, just his labor of $65 total. I would use him again!

They showed up on Friday and identified the problem right of way and told us what needed to be done to fix it. The motor needed to be replaced, so they ordered over the weekend and had it installed by Monday morning. The vacuum cleaner works great now!

He let me know what I needed in the house. He did not try to up sell me on anything. He was really asking me what type of things that I did to give him a better idea of what I needed for the house. I was very appreciative that he was listening to me. He accessed it and gave me a good recommendation. He was very efficient, knowledgeable and punctual. Everything was very good.

Arranged the servive on line. He came right on time, quickly ascertained the problem and fixed it, checked our central vac accessories and found them to be fine, then checked to ensure system working properly. Very professional, efficient.

Description of Work
He cleaned out our central vac "bin" - discovered lots of stuff in there, including a plastic bag that was largely clogging the system.

Was prompt, courteous, compentent, and reasonable. Exercised caution in navigating a long ladder in the house without any problems, and explained what he was doing.

Monty showed up as expected within a couple of days of my call. He showed me the difference between the old, worn covers of the vacuum ports and the newly designed ones. He looked at the motor and showed me that part of it needed to be replaced to get good suction. He removed the motor and took it with him to fix it. He also told me about a refurbished Electrolux power head, hose & accessories that he could sell me at a good price: $285. When he returned within a week, he brought back the repaired motor, the Electrolux equipment and installed the new port covers.

Description of Work
We have a 30-year-old Filtex central vacuum system that was installed when the house was built 30 years ago. It was not working well. Monty came to the house when I requested help with checking the motor and replacing the covers of the ports into our central vacuum system. He replaced the covers with new white ones with better features, rebuilt the motor and also sold me refurbished Electrolux equipment -- hose plus many helpful accessories.

Sales and service of all central vacuum systems

I do not work on regular household vacuums ,

MONTY'S CENTRAL VACUUM is currently rated 4.8 overall out of 5.

No, MONTY'S CENTRAL VACUUM does not offer free project estimates.

No, MONTY'S CENTRAL VACUUM does not offer warranties.

Are there any services MONTY'S CENTRAL VACUUM does not offer?

I do not work on regular household vacuums ,