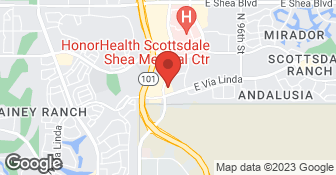 We Seal It was established in 1994 and has successfully sealed over four thousand homes in the Phoenix, metropolitan area. We provide a safe and easy way to seal new and existing homes. This highly effective program decreases pest infestation by 85% to 95%. We Seal It is not a pest control company, we specialize in sealing voids and cracks in homes to keep out pests such as Scorpions, mice, rodents and spiders....

OUTSTANDING WORK!! GREAT communication, on time, and thoroughly explained the process. He even cleaned up after himself. I highly recommend this company, it's very RARE to find someone who knows what they are doing and takes pride in their work.

Description of Work
sealed entire house inside and out

On time. Very professional. Very open about the cost and services.

David B. gave us a very thorough education on why we had a problem, the work he was doing to mitigate the problem, and what to expect afterwards. We're feeling confident that our problem is in the process of being solved, but we know we can call David anytime with questions, and if necessary in the future, remediation.

Description of Work
We had our house sealed after seeing a sudden rash of scorpions.

David and his associate were very professional explaining everything they were doing so that I understood the process. David was responsive and on-time and they were respectful of my property. It couldn't have gone any better. I would highly recommend!

Description of Work
I had We Seal It "seal" my condo for insects especially scorpions as I have seen them in my unit and my young grandchildren visit me often.

Three years ago David Barrera had come out to our home to seal cracks and crevices to eliminate scorpions. He worked dillegently and tirelessly all day and did an incredible job. However, this is a block house which apparently is a bit more of a challenge to discourage scorpions than framed houses are. Therefore, over the years we still saw some scorpions here and there, though far less. I called David on Saturday to see what ideas he might have to deter them further. I expected a suggestion or two. Instead, he immediately set a time to revisit us today (Monday). This hardworking and kind man resealed every outside door from the inside while his assistant went all around the outside checking and sealing every window and door from the outside. They worked for over an hour. When they were finished he would not take a penny! He said his policy is one free follow up revisit but, seriously, three years later to come out and do the work for no charge? I was stunned and extremely grateful. I highly recommend that you call David to come seal your home if bugs are getting in. He is fantastic. Thank you David and Luis.

David, the owner was fantastic to work with. He did an inspection of the home, sent us a clear proposal in a couple days. We scheduled them for the following week. David explained everything well. Aside from the roof, he showed me the areas he sealed. His pricing is fair and it was money very well spent! David is extremely competent and honest. We've worked with a lot of contractors over the years and in our new home, and this is by far the best company we have worked with! This is how business should be conducted!

David and his assistant arrived first thing in the morning at sunrise. They professionally completed all agreed work and cleaned up as appropriate. I was initially looking for a contractor to caulk only my upper entry level bird blocks where they meet the roof trusses but when I came across We Seal It on Angie's List, I decided to have the additional work done as well.

This service was worth every penny! I had problems with all sorts of bugs getting into the home including scorpions. After the team at We Seal It finished, we hadn't seen another bug in the home, and this review is 6 months later. We recommend them to everyone we know.

Description of Work
This service was worth every penny! I had problems with all sorts of bugs getting into the home including scorpions. After the team at We Seal It finished, we hadn't seen another bug in the home, and this review is 6 months later. We recommend them to everyone we know.

David called yesterday to adjust starting time due to cold morning temp. He and his crew member were there promptly at 8am. He didn't hesitate to show me "issues" that he needed to correct/fix. What prompted me to write this note was when David went to seal exhaust fans, etc inside the house, he told me they had already been done by a previous owner. He had me climb the ladder to see for myself ! He then discounted his quote to reflect what didn't really need to be done. In addition to his complete honesty, he fixed things outside of his quote, back fence, door knob, garage door seal. I can't say enough about We Seal It. I have dealt with a lot of contractors recently and David is the best. C. Wudcoski Scottsdale Az

Description of Work
David came out to quote sealing our entire premises for pest control and was very thorough with showing me the cracks and crevices that were actually open and un-protected. He e-mailed me a detailed list of what his quote entailed with two options. When we agreed on proposal #2, we set up a time. I just recently bought next to the Preserve so I wanted max protection and I really appreciated the excellent communication.

Impressed with David's knowledge and responsiveness in providing bid to seal home from critters. Remote project so went with our home security contractor's choice but David was extremely professional and thorough.

Founded in 1974, Phoenix Exterminating provides an outstanding and impeccable service to our clients. We have many years of experience behind us, which has left professionalism, reliability and efficiency in our work. Our company is fully licensed, and knowledgeable of the standards for exterminating and pest control services. We provide all kinds of pest control and exterminating service at competitive rates and offers discounts! Delivering an excellent and professional pest control service, we will solve your problem in a professional and timely manner. Contact us today to make sure that the pests in your home are all gone!  …

Cummings Termite & Pest Control was established in 1972. Since that moment, the company has continued to evolve towards more customer centric practices to become a leader in customer service theory. Communication, setting and achieving expectations, courtesy, and results are at the forefront of our company. Our service begins with a template and is tailored to fit the customer's specific needs. Our technicians are armed with the most effective industry tools available, are licensed through the office of pest management, and undergo a background check prior to employment. We work to ensure the customer's satisfaction and should the service not meet the customer's expectations, we will absolutely make it right. Additional address - 16918 E Colony Drive Fountain Hills, AZ 85268.  …

HERE'S THE DEAL! Start a General Pest Service Plan with us & your first service is FREE! We're a small business and we're "killin it" in pest control. That's because we know we are selling more than just pest control. This is peace of mind. And that's what we deliver. Trust us with your business. We will work hard for you and show you how our knowledge and professionalism gets the job done. We found there were too many pest control companies that were telling people you can't kill scorpions. Well you can. And we do. That's how we got started. Killing scorpions. Then one by one we have added services that we are dang good at. Termites. Rats, mice, and gophers. Roaches. Bedbugs. Sealing up homes to keep critters out. Regular pest control services. Mosquitos. Pest proof insulation. And more! Give us a call and let our office staff WOW you with professionalism and our ability to get onsite to inspect or treat your home quickly. Lets make your home a pest-free zone!  …

Frequently Asked Questions & Answers about We Seal It

How is We Seal It overall rated?

We Seal It is currently rated 5 overall out of 5.

What days are We Seal It open?

We Seal It is open:

What payment options does We Seal It provide

We Seal It accepts the following forms of payment: Check

Does We Seal It offer free estimates?

Ask We Seal It for details on free project estimates.

Does We Seal It offer eco-friendly accreditations?

Does We Seal It offer a senior discount?

No, We Seal It does not offer a senior discount.

Are warranties offered by We Seal It?

No, We Seal It does not offer warranties.

What services does We Seal It offer?

Are there any services We Seal It does not offer?