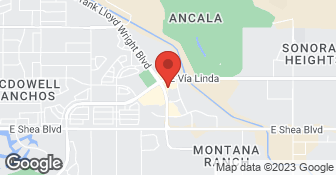 They arrived on time as what they said, they took the screen door off & the glass door was fixed and the screen door was installed back in perfectly; the glass door rollers, there was no itemized bill but if the rollers costs around $20-$30 then they charged me for $200.00 on labor which a little bit high but they did an excellent job in fixing the glass door, so basically the job was done & was satisfied with their work.

They left our patio and front walk way a mess. Dirt from their latter and muddy footprints all over. Most importantly, they bent an alarmed screen frame and disconnected the alarm on that screen. We have had to send the screen out for repair at who-knows what cost. When we complained to the owner he said he would pay for the repair. Five minutes later he called back with the guy who washed the windows on a conference call who continued to yell over and over " I didn't do that, I didn't do that I didn't do that" even though my husband saw him remove the screen from the top with his screw driver instead of lifting it out properly by the tabs. He had been informed prior to washing the window that it was an alarmed screen. After we set our alarm that night and my husband opened the window secured by that screen the alarm went off, obviously the men who washed the windows damaged the screen and we still don't know how much it is going to cost to get repaired. WE WILL NEVER, EVER, EVER USE THIS COMPANY AGAIN!

Description of Work
We hired them to wash our exterior windows...we have a lot. We made the appointment more than a week in advance and they were still 20 minutes late.

I have been using this company for a few years now & they always do the job I ask & do it well with a lot of professionalism.

Description of Work
Washed windows inside & outside as well as window screens.

It didn't take long, they were very professional and cleaned up after themselves. We were very happy with the service they provided.

Description of Work
It was a Big Deal.

They were fast and efficient. They had a good price and did a good job. Cleaned the area up well. They arrived on time.

Description of Work
They cleaned all the windows inside and out. They also cleaned the tracks and screens.

I called and asked them if they cleaned air ducts. I wanted to get an estimate to get our office vents cleaned. She asked how many ducts we had and I responded with 3. She then said they had a minimum of 10 and the cost was $400.00 minus a $100.00 coupon. I politely declined.

Description of Work
Job was not contracted

I’m sorry this person believes his call to our office was handled inappropriately but after listening to the recording of the call his statements are clearly not true. At no time did our CSR act as if “she would not be bothered by taking “ his call. There was no “loud sigh” and no inappropriate comments or sounds. He did not identify that he was calling from Angie’s List so he was given are standard pricing and not the Angies List pricing of $249. Here is the transcript of the call: CSR: Squeeky Kleen Windows this is Tiffany, how can I help you? Caller: Hi, Tiffany, I’m calling to see if you do Air Duct Cleaning. CSR: We do yes. Caller: Okay, I’m got a small office building we will be renting in Carefree, about 600 sq ft and it’s three rooms and wanted see what you would charge for that. CSR: How many vents do you have? Caller: There is one in each room, so three. CSR: Okay so the minimum is ten. Our pricing is $400 minus the $100 coupon that we offer so $300. So that is what you would pay is $300. Caller: Okay thank you. CSR: You’re welcome.
3.0

The guys were nice & showed up on time. They had to use my ladder, because they only brought a 4ft step ladder. It was a dusty mess & we had to open front & back door & side window to get the dust out. Granted, I don't think it had been done before, as I just bought the house. But, my neighbor had hers done (another company) & they covered each return in other rooms so the dust wouldn't spread. They did clean the vent coverings, which look nice. They didn't vacuum or sweep up the debris/mess they left. They left a pile (16 to be exact) of screws on my counter from the vent covers. I did check to make sure all covers were screwed back in, and they were - so not sure what these were from. Lastly, the missed my laundry room vent. I called next day & told them. Said it wasn't urgent but if they could do it when they were in area... that was over two weeks ago. I just cleaned it myself, the best I could - tired of waiting & don't want the mess again.

The service went fine. I was pleased with what they had done and did exactly what the deal stated. The work was not easy, but they delivered exactly what I needed done. The technician showed up on time and I had no issues with scheduling.

Description of Work
I purchased a deal for Air Duct Cleaning PLUS Sanitization.

It was great. Very good job.

We Specialize in cleaning the windows of your house! We're dedicated to doing the job right in a timely manner, and for a reasonable price!  …

We Are A Family Owned Business... Committed to Excellent. We Use Professional Equipment To Ensure The Highest Quality Of Cleaning. We Provide Cleaning For Your Entire Home. Our Services Include Carpets, Tile/Grout, Air Ducts Systems, Dryer Vents, Upholstery and Concrete Polishing. We Also Provide 24Hr Emergency Water Extraction. Feel Free To Call With Any Question, We Would Be Glad To Hear From You. Have A Blessed Day.  …

We are a family owned and operated cleaning service in the East Valley for over 20 years! We started out as a small house cleaning company in 1993. We have rapidly expanded into a multi-service company (House, Windows, Carpet, and Tile Cleaning) serving thousands of homes per year.  …

Squeeky Kleen Windows is currently rated 4.6 overall out of 5.

No, Squeeky Kleen Windows does not offer eco-friendly accreditations.

No, Squeeky Kleen Windows does not offer a senior discount.

Are there any services Squeeky Kleen Windows does not offer?