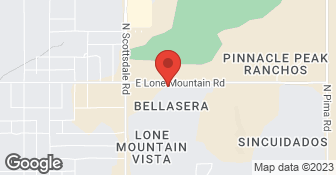 Bin There Dump That is a residential friendly mini roll off dumpster rental service. We have dumpsters specifically designed for placement in driveways without damaging your property. We protect the surface the bins are placed on with wood and will sweep up when the bin is removed. All of our bins have double doors on the back for easy access and we offer 4 sizes to fit the scale of your needs: 4yd, 10yd, 14yd and 20yd....

We had a lot of palo verde trees we needed to get rid of. Filled a container and will need to fill another in the spring.

Description of Work
Yard clean up.

Thanks [Member Name Removed]! It was a pleasure working with you!
5.0

Excellent. Their team was responsive & flexible to fit our schedule.

Description of Work
Needed a dumpster to clean put a house

Needed a dumpster for a week, I called Friday night, it was here Saturday morning. I love that the price includes drop off, pickup and dumping. One price, NO hidden extra fees. Only issue, he gave me the price... I told him I had his Angie's list coupon, and I don't believe I got the discount... even though I had it printed out. But price was still good without discount.

First time it went well, second time the bin was delivered at the end of the day rather than morning.

Description of Work
Bin delivered for emptying out a house.

They were excellent. They were very good, they delivered on time and they picked up. They did a good job. They were efficient with it.

Description of Work
They brought a dumpster out, we filled it up, they came and picked it up.

I called them up and made arrangements to have the dumpster delivered. It arrived no muss no fuss and was placed in the exact place I'd as for. When I realized I would need the dumpster a few extra days, I called and there was absolutely no problem with extending my term of usage. On the day it was to be picked up it was hauled away first thing in the morning. I couldn't be happier with the service I received.

Description of Work
They brought a 14' dumpster to our home and placed it in the driveway. Then they hauled the whole thing away at the end of our usage term.

Was very please with the dumpster service. Dumpster was delivered quickly and haul away happened within a couple of hours of notification. The price was very reasonable. Les was very friendly, responsive and professional. Would definitely recommend.

I called BinThereDumpThat for dumpster services and told them that I wasn't looking to call a bunch of places to get quotes. I told the owner that we were getting our roof redone and we needed a dumpster for the materials. He was very nice and told me what he thought would work. He said that it would give us plenty of room to spare. I asked for a larger bin but he said there was no need. The dumpster arrived on time and it was smaller than expected, but we started tearing the roof off since we were told there would be plenty of room. We filled the dumpster in a few hours and I called to ask for another one. The owner told us that he could deliver another one but he would only give us $75 off (we paid ~$300 for the first dumpster). We decided not to get another one since our materials would easily fill it up again. A few weeks later, we saw our credit card statement and we were shocked to find out that our bill was a little over $400. I called the owner and asked him why the charge was more than the original price and he mentioned that our load was over the weight limits. I knew there was a fee for the extra weight, but it would have been nice to know (when the dumpster was hauled away) that we were over the weight limit rather than find it on our credit card bill. I asked for a detailed receipt and I was promised one but we never received it. I think the dumpsters work for smaller projects, but not for larger ones. After talking with the owner about a 2nd dumpster, I called around and found that the larger dumpsters were about twice the size and offered at the same price (yes, I should have done this prior to working with this company, but I was hoping that if they could not provide a compatible dumpster that they would at least be honest and tell me otherwise). When I did tell the owner that we had filled the dumpster, I was disappointed that he did not offer more than $75 off the 2nd dumpster. Based on my experience, we will not use the company in the future.

As with all of our customers, we try to provide excellent service. We will always quote the correct pricing and the weight limits that are included. We will always try to assess the correct size dumpster needed for the job at hand. [Removed Member Name], however, underestimated the job. The dumpster she received included 2.25 tons of weight with the price of $270.75, that she was quoted. When picked up the dumpster weighed 5.44 tons. Additional weight is charged at the rate of $50 per ton to cover the dump fees. Her total bill was $422.25, nowhere near the $750 she described. We do our best to make sure we provide the best service and response to our customers and are always looking for ways to improve.
5.0

There were some that were a little cheaper. I would use them again in the future.

Description of Work
I used Bin There Dump That for dumpster service.

Frequently Asked Questions & Answers about Bin There Dump That

How is Bin There Dump That overall rated?

Bin There Dump That is currently rated 4.9 overall out of 5.

What days are Bin There Dump That open?

Bin There Dump That is open:

What payment options does Bin There Dump That provide

Does Bin There Dump That offer free estimates?

Does Bin There Dump That offer eco-friendly accreditations?

Does Bin There Dump That offer a senior discount?

No, Bin There Dump That does not offer a senior discount.

Are warranties offered by Bin There Dump That?

No, Bin There Dump That does not offer warranties.

What services does Bin There Dump That offer?

Are there any services Bin There Dump That does not offer?