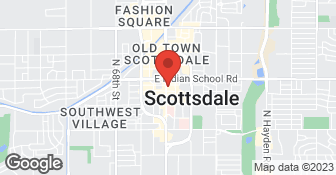 A Arizona Landscape Maintenance is one of the premier full service landscaping companies. Our services include landscape maintenance and debris removal.

I am an absentee landlord. It started out as a great relationship and deteriorated thereafter. Why? Additional costs that were not discussed in our original agreement. We discussed taking good care of the yard, small patch of lawn and a small orange tree that I just loved. My instruction were that if all else fails take great care of the orange tree. To summarize before you get into reading the details, my contentions with A Arizona Landscaping are: - Injuring the orange tree. He did promise to replace it, but quit today. - Telling me that the tenants said the yard looks so much better than it did before he started when in fact, new tenants moved in about a week ago and had no idea how the yard looked a year ago. - Added costs (and I don't expect him to lose money) even though I had asked to stay within the parameters of the $90 a month. - Not following my requests to plant Mexican Bird of Paradise because he was too busy one week butting bids on the internet. That kind of a communication may me wonder if present customers were important or the bids for new customers were more important. - Telling me they are going to do preventive weed maintenance at a cost of $125 twice a year and when I said no, I was told that the yard keepers are not going to pull weeds out when they grow. I was recalling the promise to keep the yard perfect. - I'm sure he has his side of the story. But, this is mine. Now the details. A few times, Mike called to tell me that he is going to fertilize and it will be extra cost. A few times I paid additional monies for sprinkler repairs and other expenses I cannot recall. The specified $90 a month had turned out to be more considering the other expenses. Several times I had reiterated that I do not wish to get into any other expenses but the $90 a month. I often asked to the well being of the orange tree and was told that aside from some frost, it was doing fine. Recently things went sour. First, I had asked about a month ago to have a Mexican Bird of Paradise planted in the front and the planters in the back and we discussed the colors. Mike said he'd purchase the plants and plant them. About three weeks passed and I inquired whether the Bird of Paradise is planted and asked for a price. I received an email saying he got to busy with bids on the internet and will do it next week. Next week came and went and I received a call telling me that his guys are going to do preventive weed spraying at $125 and he'll do it twice a year. It caught me by surprise and I didn't say anything, but I was not happy because my request for no additional costs was not honored.. I wrote and said no weed maintenance to which his wife wrote that in that case my yard will be full of weeds and her people will not spend a lot of time picking them up. I reflected to the time Mike said that he'll have my yard at a perfect shape. Then his wife responded that it may be better if we quit because she didn't want to make me unhappy. I decided to stay but sent another individual from Angie's List to look at the place. He reported that the place looked nice, but the orange tree was injured by a grass edger and will most likely not do well. Then Mike called with discussion of other plants in the planter totally negating the Bird of Paradise we agreed on. He did offer to replace the tree. Then he said something that really puzzled me. He said that the tenants had told him that the yard had looked my nicer than before he started. Well, the old tenants left and the news tenants moved in about a week ago and had no idea how the yard looked before. I wrote Mike an email about my feelings, and he decided to quit.

Description of Work
Take care of front and back yard, mostly gravel with a small patch of grass, some oleanders on the side and other bushes and a tree.

Call us for all your tree service, landscaping, lawn and yard work. We are a professional landscaping service which can provide you with peace of mind knowing the project will be done right. We look forward to providing a free estimate and are available to design, install and maintain your landscape.  …

We do Landscape Design, Clean-ups, Monthly maintenance, Tree removal, pruning, Artificial turf, Masonry, Tile, Gravel, Irrigation installs and repair and all other landscaping duties. Ask Javier for a free estimate or call for service. We offer quality service at an affordable price. Contact us today about an estimate!  …

We do general landscaping design and new installation, landscape maintenance, tree care, and more. I have been in this industry for more then a decade and have the experience to properly maintain and care for your yard. I am the owner and operator and have a core list of values that is used in every day business. We strive to provide the best product and customer service in the industry. I would love to make your yard everything that you want it to be and take it to new heights.  …

How is A Arizona Landscape Maintenance overall rated?

A Arizona Landscape Maintenance is currently rated 2 overall out of 5.

What days are A Arizona Landscape Maintenance open?

A Arizona Landscape Maintenance is open:

What payment options does A Arizona Landscape Maintenance provide

No, A Arizona Landscape Maintenance does not offer free project estimates.

No, A Arizona Landscape Maintenance does not offer eco-friendly accreditations.

Are warranties offered by A Arizona Landscape Maintenance?

No, A Arizona Landscape Maintenance does not offer warranties.

What services does A Arizona Landscape Maintenance offer?