Autumn Blaze just finished our "long" driveway make-over. We had ugly concrete and they removed the concrete on the top and bottom but left it in the center area and laid the pavers over the old concrete. Awesome job!!! We were MOST impressed with the crew. They were absolute artists and such hard workers. The owners Dane and Mary were very attentive and not only did everything they said they would but more. We give them 5 stars and highly recommend the Company.

Description of Work
Replaced a concrete driveway with pavers

Description of Work
"Outstanding! Couldn't be more pleased. Large paver project greatly exceeded my expectations. Dane, owner, should be VERY proud of the work he and his men do. HIGHLY RECOMMEND!

Description of Work
Sidewalk pavers that transformed and updated the curb appeal of my 70's ranch style home.

Description of Work
I did not choose them for the work.... we went with a different product completely..... but He was very nice and prompt with the estimate and it seemed to be a good job and a complete work up. Obviously because we didn't use them I don't know what the finished product would be like but they seemed consumer friendly and punctual and did a thorough job of the estimate.

Description of Work
The job entailed installing a paver walkway from the front of our house along the side & down a hill to the back of the house. Dane's crew did an excellent job of clearing the area for the pavers, setting them and cutting pavers where necessary. The job really looks great and the pavers matched our existing driveway pavers perfectly. The only minor problem we has was the paver cutting process threw up a lot of very fine dust. It was a bit windy that day so the dust was carried up in the air. A neighbor called to see if our house was on fire!

Work was performed in a very professional manner. A great deal of care was taken in arranging rocks to that they appeared to be in a very natural configuration, and particularly around drainage.culverts where their placement made the culverts disappear.

Description of Work
Design, grading and installation of a large paver driveway, a crushed rock turnaround, and rip rap along the hillside.

Fantastic job. Work was timely and professionally performed at fair price. The owner gave me referances and prior job addresses to go look at his work. He also gave me a referral to a stone company to look at the color and style of the pavers. I had an issue with the layout of a sidewalk and the owner offered to tear it out and redo it without any hassle. I had an issue with the workers wanting to use my bathroom and the owner dealt with it immediately and was very apologetic.

The contractor Dane Prator suggested incresing the size of the courtyard. We accepted this and it was really what we wanted. The workmen were very professional, showed up on time , and did excellent work. The sidewalk and driveway were ripped out and hauled off in one day. The workers were pleasant and would make minor changes. They were exceptional. We have never seen such a large project go as smoothly. The work was continuous from start to finish.. The only don't I have is -don't hesitate to use Autumn Blaze! We are more than satisfied with every aspect of their work.

The work started on time on the day promised. The estimate was adjusted downward when we changed our mind on the paver material. He showed his integrity by adjusting the old original price. The work was accomplished around the time frame that was estimated, the work was of high caliber (we saw several of his other projects elsewhere all of which were also well-executed), and the workmen cleaned up well after the work was completed. A famous entertainer in the area also used his paving work on her driveway in the Prescott area and our driveway looked as well-done as hers was. Unlike some contractor experiences, the work done by Autumn Blaze looks to be top-notch and I would not hesitate to recommend them both for the quality of their work and their ethics.

Description of Work
Autumn Blaze replaced two driveways - one with deteriorating concrete and the other composed of gravel, with Belgard pavers which matched our home and deck. Old concrete was broken up and carted away, the ground under the concrete was processed and new sandy material was added ... all was tamped down with machines. Pavers were laid and cut carefully and special (polymeric?) sand was used to fill the cracks between the pavers to discourage any possible movement.

I had a very hard time trying to find someone who did driveways. I had a concrete driveway and I wanted pavers. I had gone to a home show and I got a book from them. They had names in there. This person also had a website. I was very impressed with that. I had three estimates on doing my driveway the way I wanted it. The first one I did not care for. The second one was a very nice young man but the third man came up with what we liked best. I was very pleased with the second one but he did not quite come out with the same idea that I had explained. It was not that we disliked the second one but the third one had more of what we needed. He is bonded and licensed. I checked up on that. So far, the overall experience was excellent.

Description of Work
I used the services of Autumn Blaze Construction Llc. to get an estimate. The last time I spoke to him was yesterday. He has not started the work; he has to wait until I get the house thing done. Then I have to get the approval again from my homeowners association. That should not be long because he has already done eight or nine jobs right here where I live, in the homeowners association in this area. We have gone and we looked at those. When I have called my homeowners association and told them that we are going to have pavers put in, he asked whether it is by Autumn Blaze and I said yes. Therefore, they are familiar with him. So I’m not looking for any problem getting approved. The estimate is not confirmed yet, as I want something else added into the pavers, the cement. He has gone through the trouble to ask someone who has done the cement; what that person thought about before he even attempts to do mine. That would be an added cost. I do not have the final cost. 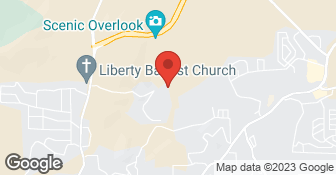 Autumn Blaze Construction LLC is currently rated 5 overall out of 5.

No, Autumn Blaze Construction LLC does not offer a senior discount.