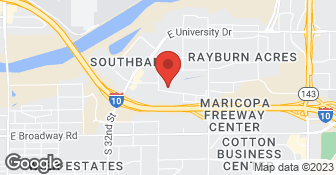 Keeping You Comfortable With Expert Heating, Cooling, Electrical, & Plumbing Service Since 1974. Parker & Sons has been serving homeowners and businesses for over 40 years and is recognized nationally for being one of the most knowledgeable heating, cooling, plumbing and air quality contractors in the industry. Serving Maricopa, Pinal & Gila Counties, Parker & Sons continues after all these years to maintain a picture perfect record with the Better Business Bureau....

20% off - Circuit-Breaker Panel and Grounding Inspection…

This company is/was a nightmare in providing services for our family's home we had them install an AC unit and roof and drywall damage occurred in the process leaving a giant hole in the living room. They were very very unprofessional in terms of communication in establishing timely response for repairs upon the service crew coming to make the repairs. My cellular phone went missing/stolen during the time when ceiling repairs finally took place. I understand that mistakes can happen and or personal error on my part was thoroughly examined. Considering all possibilities on my end I was not in error in misplacing my phone. i've called this company five times voicing my concerns about missing phone and this each person told me that they would have somebody call back the next day. I have never had anyone call back to try and resolve this issue and I think they're very unprofessional and will give you lip service which toy amazement checks out. Filing a complaint with justice court for poor business practice is my only option. Small claims court should get a reply. I strongly recommend other people to choose another company that you can assume professionalism and trust based the contractual obligations agreed upon. I took all the risk unknowingly. Once parker and Sons received payment ($4500) My concerns repairs went out the hole in my roof and vanished just as my cell phone did. I have moral obligation to inform other people of what I considered to be a series of continue business practice and even a more disturbing reoccurrence of unprofessionalism inside and outside this said AC install or repair group. STAY AWAY FROM PARKER AND SONS AND HIRE A CERTIFIED PROFESSIONAL AC installation company that will stand by their work. Be careful who you let inside your home. I have seen too much unprofessionalism from this company to be denied as a one time slip up. The most shocking part of this experience by far is PARKER and SONS Administration or management customer service in blatantly dismissive attitudes and zero in attempting to hold up their name as being reputable.

Description of Work
Lack of professionalism

Their error of omission cost me $950. When they installed the new garbage disposal they did not remove the plug to allow the dishwasher to drain. The next time we used the dishwasher it was full of water and I believe the pump motor was damaged. I had to buy a new one! The supervisor I spoke with just laughed it off as a 'rookie mistake'. Buyer beware - their rookies may cost you real money! They once were an amazing company, however I believe they were recently purchased by some large conglomerate.

Never show up ..Saturday waited all day. Tue 2 to 6 appointment..Wednesday 2 to 6 four hour window and you can't get here..I recommended u to the Episcopal Diocese of AZ.all.of our friends and any of our 250 clients ask about a plumber we recommend Parker... not ever again and it makes me sad that Parker got so big customers don't matter. We used Parker several times and were happy. Thanks for nothing pat Mack...

Description of Work
One water valve repair or replace.

They were amazing and they are good.

Fine. Good service paid them and I was very happy.

Description of Work
Plumbing and Air-conditioning

They were efficient and timely manner. They did a great job.

Description of Work
They did air-conditioning work for my heater. They did heating.

They did a good job. I say it because the mold did not return.

I have a large so I needed two new AC units. Very expensive, but nice units. The SRP rebates were supposed to take out some of the price pain. Months, later, no rebates. I called SRP, they said nothing pending. I called Parker and Sons, twice now...they say they will look into it and get back to me. They never call me back.

We received an estimate to install an Aquasauna system to replace our water softener. The quote was for $669, which was verbal, never provided in writing. I showed the technician the exact system we purchased from our actual order which is: Rhino® 600,000 Gallons with Salt-Free Water Conditioner I was concerned that the estimate was never provided in writing, so I emailed in order to confirm the exact estimate. We scheduled a time for the work to be done, 3 hours into the appointment window with no one showing up, we called and were told the appointment was never actually scheduled. That was frustrating, but mistakes happen. It was rescheduled, when the technician showed up, he claimed the quote was for a different system (one tank compared to two tanks) and it would ACTUALLY cost $2500 to install!! How is it possible the install quote increased by almost 4x? There is NO way the actual install times takes four times as long. We were quoted almost the exact same amount from a competitor for the install AND provide the Aquasauna system (which we paid $1400 for). So, let's see. Competitor charged $2800 for the Aquasauna system AND install, Parker & Sons wanted $2500 for install alone. The install takes, at most, 3 hours. So, Parker & Sons is charging $833/hour. Even the best lawyers don't make that much! I'm still flabbergasted that they're charging almost 4 times the labor time for what might take an additional 30 minutes to an hour (at most). We're having the work done for $600 from another company.

How is Parker & Sons overall rated?

Parker & Sons is currently rated 4.5 overall out of 5.

What days are Parker & Sons open?

Are warranties offered by Parker & Sons?

What services does Parker & Sons offer?