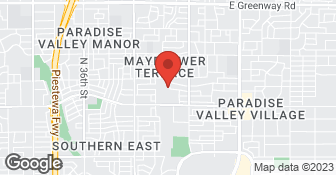 I requested a quote on April 10. Today is April 17 and I have not had any response from this company.

Hey [Member Name Removed]~ Had we received your request we would have responded. Sometimes our email system has a malfunction although this is rare. Surprised we got an F as we had never dealt with you. On our website it indicates "for faster service please call direct". If we did not respond it was not intentional. It would be because we did not receive your request. Calling direct is sometimes a good option because you get to talk to a live person at that moment. Just a suggestion. Have a nice day, hope someone else was able to assist your needs.
5.0

We had a great experience with Arizona Pool Fence. They were upfront on the phone about price when I called to inquire initially and they were able to schedule an in home estimate fairly quickly. The fence install was 2 weeks out from once I called to schedule, I wish it could have been sooner but all fence companies were 2-3 weeks out so it was expected and can't fault them on it. On the day of install the installer was early to the house, he went over the plan with me and got to work. After measuring the holes he gave me two options for the gate location which he didn't have to do but I'm happy he went out of his way to ask. I was amazed at how fast he worked, he installed approximately 70 feet of fencing in 6 hours or so (that included five 90 degree angles). He cleaned up once he was done, went over all the specs of the fence, gave me all the information I needed and was on his way. The fence looks great and I'm super happy we went with this company. Would definitely recommend them. I've attached a photo (ignore our dead grass and dirty yard) - we went with 5' brown/brown. It looks so much better in person as it's hard to get the whole fence in a single photo.

It went great! No complaints.

Description of Work
They put in a pool fence.

Marty is very professional and nice by nature. He explained the difference between good and bad fence and the imperfections he see in a standard fence. Installation was quick and without disturbance. I am feeling very safe with my 18 month outside in yard since we have the fence up. Thanks Marty.

Although we love your "A" review you were not a customer of ours. Marty is a competitor. Glad you had a great experience though!
5.0

All went very well. Mr. Leifer and his assistant arrived on time and installed the pool fence. He explained exactly what he was going to do before installation. The fence looks great!

They did not respond from the online request for quote on their website.

Description of Work
Provider didn't do anything. I went online and put in an email request for quote and never heard from them.

I never received any request for information from (deleted member name), if I had I would have responded.
5.0

All the reviews are correct. Michael is professional, does great work and is honest and ethical. Fence looks great and we feel much safer with grandkids.

Michael was very personable and knowledgeable. He showed up on time and quickly completed the work.

Description of Work
I had an existing pool fence. Michael laid out the best configuration, drilled the holes in the pool deck, and installed the fence. He also installed gate and made adjustments. He was one of the the few fence companies that did not mind installing an existing fence.

Install was quick and painless and they cleaned up everything before they left.

Description of Work
Installed 62' of Brown pool fence around my patio.

The company came and gave me a quote. I had an existing pool fence so I only needed installation. The price was very fair, he was timely, very polite and did a great job and gave a very accurate estimate of how long the job would take.

Michael was professional, on time, and trustworthy. He got the job done in the time he said. He responded quickly to all calls.

Description of Work
Installation of a pre-existing mesh pool fence

A friend recommended Az Pool Fence so we called them for an estimate. The owner (Michael) came out to our house to give the estimate. He was prompt, professional and took the time to explain everything about the safety features of the mesh, removable fence. He's been installing fences for over 15 years and gave us great recommendations on the color, height and how it should be laid out without being pushy. We had planned to get more estimates but after meeting Michael and knowing that he would be doing the work himself, we didn't even bother getting any more estimates. When Michael came out to install the fence, he was on time and finished within 3hrs like he promised. He cleaned up our backyard and then explained how everything worked. The fence looked great. We had a problem with the gate latching a few days later but he explained over the phone how to adjust it and that took care of the problem. He did also offer to come out again to fix the gate if we needed him to if we couldn't fix the problem. Overall we had a great experience with Michael and we would recommend him to anyone.

Description of Work
A removable mesh pool fence with self-latching gate was installed around our swimming pool.

At Pinnacle Fencing Solutions, our services come with a history dating to 1946. A craft passed down 3 generations offers you professional service with a quality product. We offer you the very best in craftsmanship, expertise and customer care. With a work ethic that spans a generation, we invite you to hire us with confidence.  …

Our mission is to do fence, walls, and concrete at affordable prices. Durable and attractive work, residential and commercial applications. Backed with our 5 year warranty, we specialize in all your needs. Contact us anytime during normal business hours to speak with an experienced installer about your options or to get your FREE ESTIMATE!  …

Arizona Pool Fence is currently rated 4.9 overall out of 5.

No, Arizona Pool Fence does not offer a senior discount.

Are there any services Arizona Pool Fence does not offer?