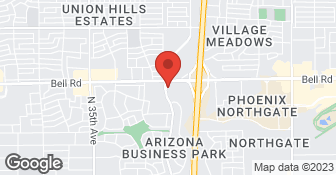 I had to follow up with him after one week to see when he would have the proposal to me. Nason said he needed another week due to some software glitch on his computer. Two weeks went by and I to call Nason again. he promised he would have it to me and when I followed up again he never responded. I had to start all over which put my my project behind on my time and had to re adjust with my contractors.

Description of Work
It is more what he did not do. I called for an appointment to provide me with a proposal. We set one and Nason showed up. he was very polite and seemed to have being able to provide the solution for my project.

This family owned business does great high quality work. They came as scheduled and provided an estimate. They explained various options. I had them install 150 feet of fence in Sun City Festival. The price was the same for paint or powder coat. I selected powder coat and could not be happier. They handled getting the permit from the town of Buckeye and made everything painless. The installation crew was great. The crew included the owner's son, and that guy was incredible. He would run to get things and not walk. I got tired just watching him hustle. Dale who headed up the crew did an excellent job. We are extremely pleased with the fence and the installation and would hire them again without any hesitation. The owners came out an inspected the job to make sure I was satisfied.

We met with argus custom iron who gave us a written quote for the pool fence in our backyard. They explained everything in detail to us about what type of material and the differences pros and cons. They were 1.00 more per foot than one of the other quotes we had got from an unlicensed contractor we found on clist so we called argus custom iron who is a licensed contractor and they matched the same quote. We got to choose the color from a color book to match our house paint. We did not have to put any money down we paid on completion. They showed up on time and finished the job that same day it looks amazing, some of the pool fence needed to be curved around the pool deck it turned out better than we expected. Kole with argus also repaired our existing gate which was falling off the wall at no charge. You can tell these guys are a small family business and care about their customers.

Description of Work
Install Pool fence and gates in our backyard.

We were EXTREMELY impressed with Argus Iron and the owner, Kole. We first learned about them at an area home show; we got a bid from Arugus and two other companies. The bid amounts were pretty comparable, but we went with Argus becase we were impressed with Kole's responsiveness and professionalism. When we initially did our walkthrough, we had intended to have a black fence. However Kole suggested going with the same color as our perimeter block fence and house trim which was a great suggestion becase the fence just and quot;disappearsand quot; and is not obvious at all. The crew came out on time, and they did quality work. In two areas, the gate was installed swinging the wrong way; as soon as I pointed it out, Kole addressed the problem and he and his team removed the offending gate and re-welded the gate in the new direction. There was also one area where a fence panel was the wrong size; they installed a and quot;temporaryand quot; panel they had brought just in case, so that we would be able to use the fence in the meantime until they could replace the panel with our style, just a few days later. We would absolutely use them again for future fencing work!

Description of Work
We had 87' of iron "pool fence", 5' high with 3' spacing (to keep small dogs from slipping through) installed in the back yard of our new house. There were two separate fence areas, one with a partially curved 70' run of fence, and the other with a 17' fence run. They installed gates in the fence in 4 different areas.

We are fence and ornamental iron builders with a vast experience in all types of fences and gates. Our mission is to provide a high-quality product whether standard or custom built. Our attention to detail and exemplary customer service is paramount and we strive for excellence with every project, no matter the size. Our company is owner-operated with over 25 years of experience and successfully in business for 9 years. Everyone within the company takes ownership of the workmanship we provide and genuinely enjoys the work they do.  …

With over 20 years of welding and fabrication experience, Natural Designs by Daniel is your industry-leading mobile welder in Avondale, AZ and the surrounding areas! We provide a variety of welding services, including mobile welding services, on-site welding services, equipment repair, stainless steel welding, aluminum welding, fabrication, structural welding services, emergency welding service and much more. We have the skill and experience necessary to service as your professional welding company, offering the highest quality services and customer care in the area our locally owned & operated company offers respect, trust, dedication, integrity, and a commitment to meeting needs and exceeding expectations. We strive to deliver complete customer satisfaction for each and every project, providing quality craftsmanship, affordable pricing, and excellent customer service. If you are interested in acquiring any of our welding services or if you would like to learn more about what we can do for you, go ahead and contact us at Natural Designs by today for more information.  …

Argus Custom Iron is currently rated 4.8 overall out of 5.

No, Argus Custom Iron does not offer eco-friendly accreditations.

No, Argus Custom Iron does not offer a senior discount.