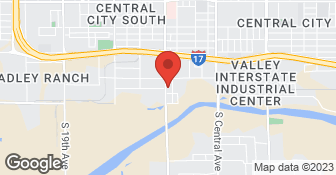 SAME DAY SERVICE FOR RESIDENTIAL SEPTIC CALLS PRIOR TO 1:00 P.M. ...

This company is wonderful. We called them with a septic system that had stopped working. They sent someone out the same day. Josh came out and was professional and could not of been nicer to work with. Josh took the time to show me the problem areas and advised me with solutions. The problem was fixed quickly and effeciently and the final bill was very fair. I could not be more please with my exerience with this company and would highly recommend them.

Description of Work
Pumped out our septic tank.

On initial contact, the receptionist, Dawn recorded all information necessary to document the inspection. Technician, Juan arrived on time, located the lid, and thoroughly pumped and cleaned the tank. Juan determined that the inlet baffle was missing. (Juan also attempted to remove a root-mass from the tank.) After repairs were complete, Ajax promptly submitted an inspection report to the title company. Both Dawn and Juan were professional, helpful and efficient. And the final price was $100 less than the estimate. Thank you Ajax!

Description of Work
AAA Ajax Pumping Services pumped and inspected the septic tank as required for the house sale by the State of Arizona.

To save money, we dug to expose the manhole covers of our septic tank ourselves. Josh arrived on time and started performing the work right away. Prior to meeting Josh, I expected a person with minimal experience and knowledge as I prejudged that this would be a high turnaround position. As it turned out, Josh is a family member of the business and seemed very dedicated to his work. He was very professional and knowledgeable and was able to answer several questions we had. Josh pointed out a problem with the PVC entering our septic. Once he pointed it out, it was obvious there was a problem. The dirt surrounding the PVC going into the tank hadn't been compacted during initial construction, which caused the PVC to deform. He advised us that this is a common problem he sees. Once we dug around this PVC pipe, the pipe was starting to fracture and eventually would have caused us serious problems. Josh gave us recommendations how the problem should be repaired. My husband was able to complete the repairs himself. Overall, we will refer this company to all of our neighbors. This work was performed in the Rio Verde Foothills area.

Description of Work
Pumped the septic system and services the filter.

I trust them an they did a good job. They were telling us the truth. We had another one about a year ago, emergency pumping and plumbing, they seem to be real nice people but they put acid down the dry well. Ajax said, acid, had been banned for seven years, that's illegal. Not only did they put acid down, they killed three of our 20year old trees. I was very upset. They are supposed to be replacing them and I need to call them. They said they would come out. They admitted they shouldn't have done it and fired the person who did it. They did not even tell me they were going to do it. I would have told them, no, don't do that. He came and I really grilled him. I said I want an experienced person out here. I said, are you experienced. He looked at me like I was nuts and he answered, yes, I've been doing this for 15 years and my family has been in business for 30 years. They've been good. They recommended the other company that does drywell. They dind't do that work but recommended a company that has been in business a long time so I was happy about that. They haven't done anything that had been negative. They were the only that could come over the weekend. They were right on time.

Description of Work
They pumped out the septic.

They are timely, professional, and their prices are very reasonable.

Description of Work
They clean out our septic tank once every 3-5 years.

I called AAA Ajax on a referral. I had called 3 or 4 other companies first, and none of them gave me a firm price. They all had the disclaimer "it depends on this or that." I also wasn't happy with the price ranges I was hearing. The lady on the phone was friendly and gave me a price from the start, with no range at all! We agreed on a 3 hour window for the same day. The driver showed up on time, did exactly what I was promised, for the price I was promised, and even went above and beyond! My lift station had a bunch of metal in it from a corroding lid. The technician got every bit of the metal out. I could not be happier than I am with this company.

Description of Work
I had my 1000 gallon septic tank and 100 gallon lift station pumped.

From the gal who answered my initial call to the time the truck pulled off my ranch, job completed, their professionalism was amazing. I fully expected a mechanical trench digger or excavator just to locate the septic tanks below ground but instead I was astounded that in 100*+ temperatures that Josh was performing the pole hole digs manually and after locating the tank, dug down and out, the necessary rock, soil and dirt to get to the opening for the truck to suck out the contents. I have to admit, I was overheating and getting tired just watching him but he kept on it like it mattered not. He was very conscious of our neighbors, he was very understanding of people's general financially strapped situation and did the very best he could and ROCKED it! Within a few hours, from start to finish, he had my tanks empty, above ground markers posted, the hole he had dug (again by hand ) put back together and the sewage out of my drains and house. There is only one company I will recommend to anyone who moves onto a lot with a septic tank and it is AAA Ajax. They restored my septic tanks as well as my sanity. Well done!! A++++

Description of Work
AAA AJax Pumping services were my savior! I had raw sewage coming up thru every drain in the home due to a leaky toliet that had filled up my septic tank and within 12 hours I had a gentleman by the name of Josh Huey answer my call. He located my tanks, marked them and pumped out more than 8 yrs of input. He left the location of the dig looking better than it did before he started and left me above ground markers to find the tank in the future and even suggested we take a picture of it just in case the markers got moved.

My experience with Ajax was very good. They were on time , professional and knowledgable. I would recommend them and use them again when the time arrives.

Description of Work
Ajax pumped my septic tank and gave me advise on how to make my system more efficient.

I was very impressed with this company. They spent an hour to check through the lines in my home, including some hand digging through some rocks. Afterward, the told me there was no problems with the septic tank, if the line were overflowing there would have been a problem, but they weren't. They recommended that I get a plumber. They were professional all the way around, showing up on time and being completely honest about the work.

Description of Work
I had them out originally to pump the septic tank.

Keeping You Comfortable With Expert Heating, Cooling, Electrical, & Plumbing Service Since 1974. Parker & Sons has been serving homeowners and businesses for over 40 years and is recognized nationally for being one of the most knowledgeable heating, cooling, plumbing and air quality contractors in the industry. Serving Maricopa, Pinal & Gila Counties, Parker & Sons continues after all these years to maintain a picture perfect record with the Better Business Bureau.  …

When you hire Belsito Plumbing for your residential or commercial plumbing needs, you can expect customized, First Class Service that goes above and beyond what you might have learned to expect from others. We pride ourselves on 100% customer satisfaction, and do our best to provide amazing service to every customer. We will make sure you are 100% satisfied; if you’re not, we would appreciate a chance to improve your experience.  …

One Stop Home Services, is your local one stop shop for all your plumbing, Heating, Air Conditioning service needs. Any time day or night, weekends or holidays we will be serve you at no additional cost for emergency services. We employ only the best plumbing/HVAC technicians, bringing you expert service with more than 50 years of combined professional experience. You can rest assured that we will provide only the best material and highest quality of craftsmanship. Our team looks forward to working with you on your next plumbing/HVAC project. Residential COD We accept all major credit cards Visa, Mastercard, Discover, American Express. Commercial net 30 accounts O.A.C.  …

AAA AJAX PUMPING SERVICE is currently rated 4.9 overall out of 5.

No, AAA AJAX PUMPING SERVICE does not offer eco-friendly accreditations.

No, AAA AJAX PUMPING SERVICE does not offer warranties.