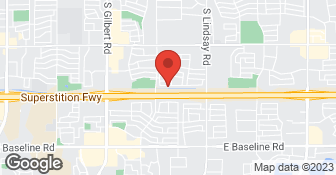 You Dream it We Can Build It! 40 years of experience in all phases of remodeling. Family owned and operated. Old Fashion Quality craftsmanship at affordable prices. We give free estimates.We can provide any service with or without the use of our subcontractors....

Initial contact went well. I talked with the Office Manager as she the job. I sent the dimensions, a picture of where I had removed old cabinet and a picture of the door from the new vanity I had installed. I understood that this would be done on a as can basis. I expected a couple of weeks, though now the Office Manager is saying she said sometime in June. This initial contact was complete on May 21 and they said they would go ahead and order the door. On June 4, I requested an update via email -- no response received. On June 14, I called and was told that the base cabinet was built and they were waiting on the special order door, On June 25, I requested an update via email and received an email response that no progress had been made as they were busy on other jobs. On July 13, I requested an update via email and received a response from the Office Manager to call her.I called back immediately and was told that my cabinet had been damaged by their application of lacquer and that they would not complete the order. Points: 1, When they told me would not complete the order, they made no effort to fix/redo or even recommend somewhere else that I could go. 2. Sometime between June 25 and July 13 they were aware that they would not be completing the order. They did not make any effort to contact me, rather waited till I followed up. 3. At no time in this process did they ever initiate any contact regarding status/issues/etc,,

Description of Work
I had initially contacted M3 on May 19, 2015 to request a custom Medicine Cabinet as part of a bathroom remodel.

Did an A1 job. I will be hiring them again for work at my new house.

Description of Work
Repaired water damaged bamboo floors and kitchen cabinette. Did a great job, and finished the job before the dead line.

Did a good job and also came back to correct a few things. They were very punctual, pleasant and trustworthy. We had purchased most all supplies such as cabinets, flooring, lights, insulation, and counter tops.

I know nothing about construction. M3 is a family owned business and has exceptional reviews, which is why I selected them (after getting several other quotes). This was my first remodel on my first home (which is REALLY old) - I had LOTS of questions, and M3 was very responsive and patient with me throughout the whole process. They took a very family oriented approach with me and I never felt that they were out to make the big bucks with me. When I was designing the remodel, Brian provided me with his recommendations, and M3 did things for me that I didn't even request (like put together a ceiling fan and come up with a better solution to my electrical issue that saved me A LOT of money). They were very fast - in and out within a week for a whole kitchen remodel. I rated them a and quot;Band quot; in quality as some of the tiny 1/2 inch glass backsplash aren't 100% aligned. Also, the countertops were ordered before the cabinets were installed. The backsplash is not noticeable unless I point it out (it's just me being picky). They were absolutely wonderful and I believe I paid an excellent price for what I got. Come time for my bathroom remodel, they will be the ones I call.

Description of Work
Remodeled kitchen (complete remodel - tore out everything and removed a wall). Approximate cost is for labor only.

Brian was very professional and precise. He takes great pride in his work. He was there when he said and completed the job in a timely manner. He was well trusted.

Great job all and all.

Prompt. Courteous & did even a better job than expected, finished in 2 days.

Brian and Brandon did such an amazing job. I am so happy in my kitchen. Brian cleaned everything up and vacuumed inside and outside the house. The price was unbelievable too. I kept putting off remodeling of the kitchen because I was being quoted a price three times higher than what m3remodeling charged. The price was unbelievable especially when I saw the quality of his work. Brian even did extra things like making a shelf from scratch. Brian was easy to work and very honest. For example, Brian and his son worked so hard to save my granite. The two of them lifted a slab that must have been 400 lb and treated it with care. The effort that they put into my kitchen made it look like it was their house that they are working on. I feel so lucky that I found them and refer them to all my family and friends. Thank you!

Description of Work
Kitchen cabinet rip out and installation along with customized made cabinets.

M3 Remodeling LLC is currently rated 4.9 overall out of 5.

No, M3 Remodeling LLC does not offer eco-friendly accreditations.

No, M3 Remodeling LLC does not offer a senior discount.

No, M3 Remodeling LLC does not offer warranties.

Are there any services M3 Remodeling LLC does not offer?