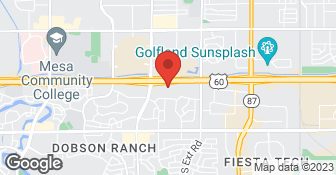 Express Roofing is family owned and operated roofing company, located in Mesa, AZ. We have been serving the valley for the past decade, protecting Arizona’s residents one roof at a time. Our trade has been passed down through two generations and we are continuously committed to providing only the highest quality products, top-notch workmanship, and superior customer service to each and every customer. We’ve become one of the area’s top local roofing companies because we care about this community and that is evident in everything we do. Whether you need a new tile, shingle, or flat roof, you’ll find that with our generations of expertise, passion, and experience, we will not only get the job done but get the job done right. We provide comprehensive roof replacement and installation services all throughout Arizona and all of our services are designed to give you peace of mind overhead for years to come; we will never perform patch ups that do nothing to eliminate the source of the problem. We learned early on the value of honest work at a fair price which has been the cornerstone of our success....

We hired Express Roofing to do a repair/refresh certification of our roof since it was old and run down. They were excellent to work with, very good with communication and flexible. They did great work and were timely and we are very pleased with the result.

Description of Work
A repair and certification of the roof.

Great! Very nice people to work with, kept work area tidy and finished the job quickly. I received drone video as well as photos during the process as well as after completion.

I cannot recommend Express Roofing enough. I received 7 bids for my roof project included some highly rated companies. Express Roofing was the only company to provide me with photos and a video of my roof issues. They wrote out a very exact contract and were the only company to include fascia board and ply board for the areas of concern that they saw. They cleaned up everything at the end of each day and finished a large project in 4 days. This included both the shingle roof and 2 foam flat roofs. Jenna and Jeremy were at the house every day to provide me with photos AND drone footage to show the workmanship and progress each day which I received via email. They were patient with all of my endless questions and phone calls to follow up. The roof looks amazing! They painted the T tops a good color to match the roof and new shiny whirly birds. Call Express Roofing (480) 226-4245.

couldn't have been better. The price was right, workmanship was great, complete professionals. They go the extra yard even to the point of daily drone flyovers. then sent me a link daily so I could see the narrated videos of the flyovers that show the progress made that day. The most important thing was that there were no surprises. I don't need to here those dreaded words "there's a problem" an uneventful job. I'll drink to that.

Although the start date was delayed a couple days the company was very responsive and remained in constant contact regarding the delay. It was mostly due to excessive heat and rain in the valley that week.

Description of Work
Tear off of two layers of shingles and replacement of roofing with new dimensional shingles. Removal of old ventilation system and installation of ridge vent system.

Great! Work started on a Tuesday and they were finished by Friday afternoon. All materials cleaned up and you'd never know they were there.

Description of Work
We had the underlayment on our tile roof replaced, a cricket built in front of our chimney, and patio roof replaced. Rene and his guys were punctual, nice, clean, fast, and incredibly professional. Express Roofing was recommended to us my a family member and I would definitely recommend their services to anyone needing a new roof or repair.

After roof was completed it was far better than the builder had done originally. All work was done on time and at the quoted price. Excellent job!

received 9 bids. Rene the owner of Express Roofing come out to quote the roof as well. What he had to say compared what the other roofers had to say is why we picked Express Roofing. Rene went thru in details and explaned what and how he was going to do. Verses the other roofers were allot more vague. Rene had his pencil sharpened and ready. There were a total of three people I communicated with during the process. After accepting and giving the"OK' to work I was contacted by a gentleman names Jeff "office manager". Very impressed with the commumication from Jeff. He kept me informed via email and always returned or answered my phone calls same day for the most part. The third person I had allot of contact with was Ricardo, ( Job foreman) I would get up in the morning (still dark) There would be Ricardo waiting for other workers to show up. Once able to see (sun up) Work begain, And didn't stop till dark. The crew cleaned up at the end of the day very well leaving no messes from previous day. Very impressed!! The crew worked five straight day till completion. Workers very detailed and everything was done to my liking. As for the "charge ups. (additional work that needed to be done on top of original bid) Very fair and worked with me. Express roofing was not the cheapest bid, but not the most expensive. Great job Express Roofing!!!

Description of Work
Replaced roof and most of fascia board around roof as well as skylights and installed 4 turbine fans. With some carpentry work that needed to be done on stucco in front of house.

it went great. They were here early and stayed late, and in the heat. Workers were cooperative,as we work from home, accommodating our phone calls. Excellent working relationship.

They took about 5 days to remove the old tile and install the new tile roof. The installation is more difficult than most roofs, because the first and second floor have hip roofs. Since I'm retired I was able to watch the entire construction project, and I observed a very professional installation of the new roof. I highly recommend this firm for your roofing project. As a Professional Engineer, I expected this type of detail during my career.

Description of Work
We obtained estimates from four roofing companies, and selected Express Roofing, LLC based on: 1. Professional explanation of the tile roof replacement process and details, 2. Detailed estimate, including an estimate of plywood replacement and set prices for additional sheets of plywood (existing roof was 40-years old), 3. Higher quality underlayment, 4. Knowledge of Code requirements, 5. Estimated cost of $16,600.00 was just above the lowest estimate, in my opinion the better value, and 6. Cooperated with the SkyLightGuy to install 2 skylights during the roofing process.