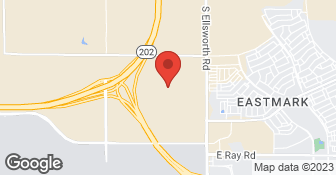 We have over 10 years experience serving the Phoenix Metro area in the home audio and video industry. We can install and configure your new home audio/video equipment on site efficiently and immediately. In addition we provide you with accurate and up to date information to help you save time and money on your home theater inquiries. We are dedicated to providing you with the utmost level of professionalism. We will install your A/V equipment and provide you with multiple options for the ideal location of your components. We know it can be difficult learning and installing your system and that is why we are here to help...

Did Great work clean up the area very good guys to wok for !

Description of Work
The work done was Installed New Yamaha receiver sound system speakers all the wiring soundbar for TV ! and More !

I hired Nick and his crew to run some cat6 cabling in my home. My wife walked through the job with him very thoroughly and explained we wanted cabling run along the ceiling at the corners using trim covered wiring so we could avoid holes in the ceiling in the room where the fiber drop entered my home. His crew ignored these instructions and they cut 10 huge holes in the middle of my ceiling to run the cabling through. Absolutely not what we asked for. The crew also left the job before verifying the cabling they had run actually worked - the drop running from the fiber to the wireless is faulty (verified this in 2 minutes when I got home). When I called Nick he tried to tell me that my wife had not told him about the trim cabling and that it was our fault - essentially calling my wife a liar. He took no responsibility for the damage he did to my home nor the faulty lines his crew ran. I run a small business out of my home and count on after normal business hours connectivity. He essentially cost me a full business day and the cost to fix the drywall damage to my ceiling. Avoid this company at all costs - they don't care about customer service or ensuring the job is done right.

Description of Work
Wiring inside my home.

Nick and his guys did a great job. Very prompt and very efficient. Nick was very thorough in explaining the whole system was coordinated. his idea for the Harmony control really added value by eliminating the extra remotes. We are really enjoying our new entertainment system...

Flagged their van down in the parking lot of a Lowes on 7/18 and very briefly discussed what I needed to have done which was re-routing a home theater satellite speaker cable from outside to the inside of the wall. Nick proceeded to hand me 3 business cards and I told him I would follow up. I called the same afternoon, left a message to have him call me back and still have not received a reply. Also, attempted to contact via Angie's List on 7/21 and still no follow up. I suspect that he felt the job was going to be too small so why bother. Time to look elsewhere.

Description of Work
No work was performed

I had requested an outside antenna to improve my reception for my digital tv - especially for my favorite channels, 7.2 and 7.3. Nick and another man showed up promptly at the appointed time. I showed him the current setup and the location of the cable connections (not currently being used) and the cable box outside. I told Nick that mounting the tv on the wall would be fine if he thought it would fit the area and he agreed that it would be a good idea since I have cats that like to walk around the set. I also asked for a connection to the master bedroom if it wouldn't be a costly item - he said that it would be easy to connect to the cable access wiring already installed in the bedroom. We agreed on the work to be done and he told me the price for each part of the installation. The television was mounted firmly to the wall (tested later by my cats - did not budge). The cables I was using were too short for his plan to hide the cables inside the drywall, so I agreed to buy new longer cables. The outdoor antenna was mounted and connected, but when we scanned for channels, my favorite channels were not available. I also discovered that he had wired the television thru the DVR so that I had to keep the DVR on to view programming - we had not talked about this, and I told him that I had previously been able to watch one program on my tv while recording another channel on my DVR. Nick tried scanning several times and tried to figure a solution using the tv connected to the antenna vs to the DVR, but could not receive my favorite channels. The reception to major network channels was excellent, and it also received a number of Spanish language channels, religious channels, and channel 45. He told me that he could exchange the antenna he mounted for another with longer range but that would take a day or so to obtain and would cost a little more. He also stated that he could not promise reception of any particular channel I agreed. That night I found that my reception to one of the local network channels dropped completely, but that I had intermittent reception to another channel (Tucson based) that carried some of my favorite programs. It only lasted an hour or so, but I was hopeful that the stronger antenna would be successful. He showed up promptly as scheduled two days later with the larger antenna, installed it quickly and came inside to scan for channels - excellent reception on all major channels but did not receive my favorite channels (7.2 and 7.3) or the Tucson channel. He explained again that he could not promise reception, and I told him that I would try another indoor antenna to continue receiving my favorite channels and to be able to watch two programs at once. We concluded the transaction and he departed. Later that day I purchased a new indoor antenna ($25) and attached it - it brought in all the major channels right away, but it took me hours to find the right tilt/swivel/location to place it in to receive my favorite channels - which it finally did in time to watch and quot;Perry Masonand quot; that evening. The outside antenna installed by Dynamic A/V brings in very clear pictures on all the channels it receives even at night (unlike the first one ) Someone with time, patience and know-how might be able to move it to just the right location where it would pick up 7.2 and 7.3, but for now I am content to use the combination of both the outdoor and the inside antennas to receive the programs I want to watch. I thank Dynamic A/V for a job well done on the firm mounting of the tv to the wall, the hiding of the cables, and the installation of the outdoor antenna - which gives me excellent reception without having to move any and quot;rabbit earsand quot; on the channels that it does pick up. I was not totally satisfied with the installation since I had to buy additional equipment and walk around my family room for hours to find the right location for my channels, but I DO understand that they are located farther away, are probably lower powered and that reception of any channel in any location depends upon many factors - so I am content, I am satisfied with the work done - just wish they had tried a bit harder to get the reception I asked for and did manage to get on my own. The outdoor antenna could probably be moved to find those channels, and I may hire someone to try hunting a bit, but at least I have regained most of the access that I had before the television was moved. Thank you for the work done, and the firm installation of my television - the cats have already and quot;testedand quot; the steadiness of the mounting and it has passed.

Description of Work
I "cut the cord" last year and started using only over the air (OTA) antenna access to television, but wanted better reception than the rabbit ears I had was bringing in. Dynamic A/V did the following work installed Antenna system in family room and master bedroom Mounted Flat Screen TV on a one arm swivel mount and hid any applicable cables or wires - adding 10' HDMI Cables to my system so that they would reach from where he was hiding them in the wall to my television and electronic accessories. Installed outside antenna - changed it to another one with longer range reception

Description of Work
Technician knew what he was doing, knew exactly what to do and did it. Installed TV antenna and routed it through indoor panel. Pleased with work. Would use again.

My team of highly qualified technicians have experiences ranging from home networking to cyber security, information protection, and computer repair. We also have a training-centric mentality. Teaching you to be able to handle what life throws at you from an IT perspective. If we can't fix it, no charge. Ask about our annual support plan. Never have to worry about finding a tech again!  …

We are licensed and bonded for residential and commercial work new builds or remodeling. We realize that every customer and project is unique in its own way and will complete the project in a timely manner. Please call us or click for a free estimate today.  …

****PLEASE NOTE: DUE TO HIGH DEMAND & STAFFING CHALLENGES, WE ARE SCHEDULING OUT APPROXIMATELY 3 WEEKS! WE APPRECIATE YOUR BUSINESS AND THANK YOU FOR YOUR PATIENCE**** Family owned and operated we understand and value the trust our customers have shown us over the years to let us into their homes and offices to work on their projects. With over 15 years of experience, Elite Automation has worked with customers from across Arizona to fill their home and business automation needs. From mounting TV’s to fully customized automation integration solutions, Elite Automation was founded on the belief that every home in America deserves to be a smart home. Automation is making homes more energy efficient, easier to maintain and manage, and most importantly, more fun to live in and play in. With expert design, quality installation, and excellent customer service, we pride ourselves on giving our customers an experience like no other. Bring the future home today! Call, text, or email for more information. We look forward to working with you.  …

Dynamic Audio Video Solutions is currently rated 4.1 overall out of 5.

No, Dynamic Audio Video Solutions does not offer eco-friendly accreditations.

No, Dynamic Audio Video Solutions does not offer a senior discount.