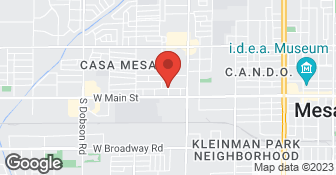 Instead of repairing and throwing money at the cooler he suggested to remove the cooler. The fact that he doesn't do installations and only repairs, make this a better firm to do repairs with. They will not push a new unit on you. Highly recommended.

Description of Work
Swamp cooler had a short.

Did great job diagnosing the problem and figuring how to fix it.

I called Brad and told him my house was getting warm, but the fan was blowing and the air did not feel cold enough. He told me to check the filter. I did and changed it although it was not very dirty. He came by that afternoon and checked the unit. It needed freon. So he filled it and the unit started blowing cold air again. Very simple fix. I always get prompt and professional service from Brad. We have been cool ever since. Thanks, Brad!

Description of Work
Brad checked my a/c unit for freon.

I have been using A/C Handyman for several years. Brad is professional, prompt (always accurately estimates when he can be there and calls 20-30 minutes before he arrives). He also has given me info on best maintenance procedures, etc. I have found him to be completely reliable with reasonable prices. I would highly recommend A/C Handyman to anyone.

Description of Work
Checked out A/C and evap cooler.

He was very good. he came out when he said he was going to. He was very knowledgeable, and seemed to know what he was doing. I was very happy with him.

Description of Work
They did a cooler inspection on a swamp cooler.

I called Brad in the morning and he was here when he said he would be, early afternoon. Our a/c wasn't working. Blowing hot air. He went on the roof and determined the problem and replaced the condenser and charged the unit. It was working fine when he left. About 10 p.m., I heard a terrible noise coming from the a/c. I turned it off and we slept with fans until morning. I called Brad and told him about the noise. He came immediately, and found the cage had broken loose and was hitting the fan. He fastened everything down and noise was gone. He said that I should have called him the night before and he would have come out at 10 p.m. to fix the unit. I was very satisfied with Brads work and would not hesitate to use his services again or refer him to friends or family.

I noticed the AC was blowing warm air. I called Brad Stansbury at AC Handyman. He said he could be here in a couple of hours. He arrived when promised. He looked at unit and told me the compressor was not working. He had the compressor on his truck and promptly replaced the broken unit. He also checked over the unit and determined the freon was low. Filled that. At about 10:00 p.m. the unit started making a horrible noise. We turned it off and called Brad in the morning. He came right out. He told me I should have called him when the noise started at 10:00 p.m. and he would have come over. Something was loose and was hitting the fan. He put in extra bolts and secured everything. No more noise and everything has been fine ever since. Our AC unit is about 10 years old so we are very grateful that he serviced it without trying to sell us a new one. He was very professional and honest and we would most certainly use his service again.

AAA Cooling Specialists is the leading expert in Heating & Cooling with an emphasis on energy efficiency. We pride ourselves in exceptional customer experiences. Helping people stay comfortable in their homes. We are creating value by educating the customer. We show our customers how to make their homes more energy efficient by providing information when they need it. We are dedicated to making everyone comfortable in their homes. Although we don't offer 24/7 service we do emergency service calls up to 9 PM. We offer free estimates on new system installations.  …

Mechanical Bros Heating and Cooling has been servicing the Phoenix Valley for over 15 years. We care about the quality of our work and satisfaction of our customers. We provide fully licenses and bonded technicians. We also offer full financing on all new A/C units. Our air conditioning, heating, and duct cleaning service is available to the entire Phoenix Valley including: Phoenix, Glendale, Mesa, Peoria, Scottsdale, Sun City, Sun City West, Surprise, Tempe, Avondale, Goodyear, Anthem and many more. • Retro-fit installations • Duct cleaning • Commercial and Residential preventative maintenance programs • Filter and Service Packages  …

For more than 41 years, Howard Air has been one of the highest-rated heating and air conditioning companies in Arizona. Earning its reputation by consistently operating in an honest and transparent manner. Howard Air offers the industries premier products, brands and an award winning service and installation department. Call us today to experience the quality of our services. Weather replace or repair call Howard Air! Additional Phone Number: (602)633-9302  …

How is A/C Handyman overall rated?

A/C Handyman is currently rated 5 overall out of 5.

What days are A/C Handyman open?

No, A/C Handyman does not offer free project estimates.

No, A/C Handyman does not offer eco-friendly accreditations.

No, A/C Handyman does not offer a senior discount.

Are warranties offered by A/C Handyman?

What services does A/C Handyman offer?

Are there any services A/C Handyman does not offer?