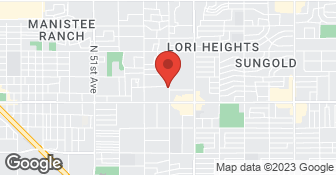 Tom and Jesse are the greatest. Their work is excellent and they clean up after themselves. We wanted to replace five 29-year-old outside hose bibs — one had a leaking washer (which meant the others probably weren’t far behind) and several were leaking at the packing (you can tighten them up only so much), and replace pitted sink pop-ups (2) and tub stopper in bath 2 for cosmetic reasons. Jesse did all this and replaced the hose bibs with quarter-turns. We also wanted to replace two toilets (also 29-years-old), if we could be assured they would empty on one flush — which our existing toilets often didn’t do. Jesse recommended two: American Standard Champion and Cadet Pro. He showed us YouTube videos of these 1.28 gpf toilets flushing, and explained their pros and cons. They both have trapways (fully glazed) and flush valves which are larger than our old toilets. We believe the Champion probably dumps water faster into the bowl since the valve moves up and down, allowing water to enter the valve from all sides, while the Cadet uses a large flapper. However, to replace the valve on the Champion requires disassembly of the tank (we watched a video). So we chose the Cadet Pro. Tom also pointed out that the Champion requires a greater force on the flush handle which sometimes breaks the plastic parts inside. Tom installed an ADA height one in bath 2 while Jesse installed a standard height one in the master bath (ADA was a bit high to fit). They caulked them nicely to the tile floor. In addition, we wanted to discuss whether or not our 10-year-old water heater should be replaced. Jesse pointed out that the plumber who installed the existing heater should have instructed us to have the anode replaced every three years. So we decided tp replace the water heater, and good that we did. When it was moved, there was water and considerable rust underneath, so it was leaking. Sav-On Plumbing did a great job. They modified the supply lines to fit the new higher water heater, installed quarter-turn valves on both the cold water in-take and hot water out-take, installed a drip pan with drain to the outside through the block wall, and replaced the drain valve on the heater with a larger quarter-turn valve. Everything went smoothly, and we highly recommend Sav-On Plumbing.

Tom and Nancy at Sav-On Plumbing are the greatest! They went way above and beyond to help me replace my hot water heater. I'll never use anyone else!

Thank you. We always love working with you.
5.0

My experience was awesome! Tom made a bad situation better and I feel confident that my water heater will not be something I have to worry about again.

Description of Work
My water heater started leaking in the middle of the night. I called Sav-On Plumbing and Tom was at my house first thing in the morning. Not only did Tom fix the problem the same day, the price was more than fair and the service was excellent! I will be using Sav-On Plumbing for all of my plumbing needs from now on! Great service and excellent price!

Company sent employee Jesse who was on time, professional and explained everything. Price was very reasonable. I definitely would hire this company again and was so impressed I made sure to get a business card for any future plumbing problems.

Description of Work
Sink leaking and no hot water in up stairs shower.

Brandon was on time, professional, and a pleasure to work with. He explained what he was doing and why, and gave a clear estimate of what was needed, as well as a "worst case scenario" should unexpected problems be found once the old unit was removed. I have an old house, so there are always "complications." Brandon easily overcame all obstacles and finished in a timely manner. I was very pleased with the work and with the results. Thanks Sav-On, and thanks Brandon.

Jessie was very professional, very polite and pleasant to deal with, and kept me informed as he went along as to what progress was being made. He was extremely neat and left absolutely no mess to contend with. Because the problem involved my kitchen drain, he even connected a temporary drain for me so that I could still use my kitchen sink. He was so prompt and courteous, I told him he was giving repairmen a bad name! Kudos to this company for vetting its representatives to present so well. I will definitely refer this company to all my friends and contacts and will certainly call them again if a plumbing problem arises in this old house.

Excellent! Sav-On employees were professional AND personable from the first phone call through completion of work done and billing.

Description of Work
Emergency water shut off and replacement of faucets.

Thank you so much! We love working with our Angie'[Member Information Removed] List customers and you were great to talk to from our first conversation!
5.0

Went great. Jesse put on booties prior to entering our house. Confirmed disposal was needed replaced, installed new one tested it and checked for leaks. Took the old disposal to the trash barrel for us. We called them for this work because they had previously given us outstanding service when they game end replaced our hot water heater and installed new faucets for us in the kitchen and bathrooms.

It went very well. My Hot Water heater was in a small alcove but they were able to get to it. They replaced the hot water heater after showing me why it was better to replace than repair. They were very polite and professional and their pricing was very fair for the quality of work they provided. I went with this company because of a great referral from a friend who has used them a couple of times and who were very pleased with their work. I definitely concur with my friend. I would use them again and have already referred them to a few of my friends. To do a fair review and not just name all the pros, the one small con was that they did show up about 1/2 hour later than scheduled but called me up before hand to let me know which I very much appreciated.

Description of Work
install new water heater and shut off valve with water connectors and other parts to bring me up to plumbing code.

We’ve been helping companies and consumers fix problems for over 30 years. With our headquarters in Scottsdale, Arizona, and an expanding service footprint across the Southwest, we understand the unique challenges of the desert and mountain environments. We also provide facility management services nationwide. Our promise is simple. From plumbing to HVAC and everything in between, there’s no challenge too big, small, hot, sticky, wet, sweaty or slimy for our team of dedicated professionals. You can always trust us to: Give straightforward estimates, Show up on time, Complete our work in a professional and meticulous manner, and Be fair and honest in all our dealings. Call us for your next repair or upgrade, and see why our combination of on-time service, qualified technicians, and reliable repairs has made our services the one to beat.  …

Custom Plumbing of Arizona better known as the Drain Whisperers, the home of the 69.00 drain. No trip charge, No extra charges for nights and weekends Apples to apples price guarantee. If you’re looking for a Plumbing company that isn't looking to make you laugh at their commercials then make you cry when you get the bill, Call 602-Too-Cool. That’s 602-866-2665  …

Bonded
Insured
All statements concerning insurance, licenses, and bonds are informational only, and are self-reported. Since insurance, licenses and bonds can expire and can be cancelled, homeowners should always check such information for themselves.To find more licensing information for your state, visit our Find Licensing Requirements page.
General Information
Free Estimates
No
Eco-Friendly Accreditations
No
Payment Options
Check, Visa, MasterCard, American Express, Discover
Senior Discount
10%
Emergency Service
Yes
Warranties
No

We do all residential plumbing service and repair, including slab leaking location, water heaters, re-pipes and offer a complimentary (with service) whole-home plumbing inspection.

Sav-On Plumbing, LLC is currently rated 5 overall out of 5.

No, Sav-On Plumbing, LLC does not offer free project estimates.

No, Sav-On Plumbing, LLC does not offer eco-friendly accreditations.

No, Sav-On Plumbing, LLC does not offer a senior discount.

No, Sav-On Plumbing, LLC does not offer warranties.

Are there any services Sav-On Plumbing, LLC does not offer?