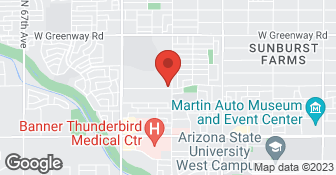 At Desertview handyman service we do it all there is no job too big or too small we have done everything from complete home remodels to Roof's to bathroom remodels to floor jobs whatever it is we can do it and we take pride in our work we guarantee 100% customer satisfaction...

It didn't go well at all. I asked for a quote and provided a detailed list of work tote quoted. Their ad says no free quotes - but when I asked about it they told me no problem. I confirmed that they had received my job list and they agreed to provide a quote. They wanted to come out and look at the job after two weeks. They showed up late for that - and the owner Russ Alexander came instead of Tyler the person originally reviewing the job. Mr. Alexander came with no pen - no paper - no tape measure and wrote nothing down. I called afterwards and was told it would be a week to get a quote. No quote came. I sent an email and asked them to let me know if they were not going to quote it - no problem - it would just help to know so I could move on to other providers. the never returned a text or an email - they just because non responsive. This is a very unprofessional organization - they are either lazy or high.

Description of Work
No work was performed

With over 20 years of experience in roofing, we bring our expertise to your roof. We specialize in shingle roofing, tile roofing, foam roofs, storm damage, and basic repairs. Contact us today for your free quote!  …

Disaster Recovery Restoration is the premier restoration company in Phoenix, Arizona. We specialize in restoring properties for both homeowners and businesses alike. In addition, we provide water damage restoration, fire damage restoration, and mold remediation services. Our team is on call 24/7 for any emergency restoration needs in Phoenix and can be out to your property within 45 minutes. We will work hand in hand with your insurance and offer no-obligation free estimates.  …

Insured
All statements concerning insurance, licenses, and bonds are informational only, and are self-reported. Since insurance, licenses and bonds can expire and can be cancelled, homeowners should always check such information for themselves.To find more licensing information for your state, visit our Find Licensing Requirements page.
General Information
Free Estimates
No
Eco-Friendly Accreditations
No
Payment Options
Check
Senior Discount
No
Warranties
Ask for details

Desert View Handyman Services is currently rated 1 overall out of 5.

No, Desert View Handyman Services does not offer eco-friendly accreditations.

No, Desert View Handyman Services does not offer a senior discount.

No, Desert View Handyman Services does not offer warranties.

Desert View Handyman Services offers the following services: We offer the type of service that you need no matter what it is when it comes to your home we can handle it and we guarantee that you will be satisfied