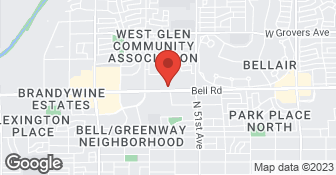 Home or business repair and remodeling. We accept all major credit cards and have several crews available to help with your projects. We have been in business for 25 years and have a long list of suppliers and sub-contractors available....

David was very good at returning my calls and responding to requests. They used sub contractors, for the tile and counter tops but David was good to make sure the work was done to my satisfaction. I may have been able to save money hiring the installers directly, however it was beneficial having them oversee the project. He was somewhat protective of having me communicate directly with the installer, which made me think he was charging me more than he was paying, but I believe that is standard. David and his crew were very knowledgeable in all aspects of construction and were able to help me make informed decisions. For example, I was replacing a ceramic floor with travertine which is thicker. They suggested if I was not totally satisfied with my current dishwasher, it would be a good time to replace as it would be very difficult fitting a new one in after the new thicker tile was installed. I did replace mine and the new one would have been impossible without modifications, had I waited until after the new floor installation. I had them give me some bids on painting and some other handy man type work, but their bid was quite a bit higher than another so I did not use them for those jobs. As always, I would recommend getting three bids on any project. And just because a company has given you a good bid and done work on one project, does not mean they will be the best price on a following project.

Lean Developers Corp is the most reliable general contractor in the Peoria, AZ area.We build beautiful custom homes that all your friends and family are sure to admire.Our experienced and dedicated team has the versatile skills to handle any home project.  …

Castle black masonry is a family of experienced masons. We are a owner operator company, with 45+ years of knowledge in the trade. We provided many different types of work. for example: .All types of block laying .Concrete footings .Concrete pads . Stone/Brick veneer .Radius/Retaining walls. . Anything with concrete or masonry We take pride in our work and stay true to our word. our experience speaks for its self. we hope we are able to help in your next project.  …

Airborne Masonry is an experience masonry service that provides top quality construction to the Phoenix, AZ area. We have over 20 years of experience and we pride our business on customer satisfaction. We look forward to taking on your job and value your business. Call us or click for an estimate today!  …

Anything the homeowner needs done, if we don't do it, we can refer you to one of our associates or suppliers that do.

How is D & G Handyman Services and Remodeling overall rated?

D & G Handyman Services and Remodeling is currently rated 4 overall out of 5.

What days are D & G Handyman Services and Remodeling open?

No, D & G Handyman Services and Remodeling does not offer eco-friendly accreditations.

No, D & G Handyman Services and Remodeling does not offer a senior discount.

Are warranties offered by D & G Handyman Services and Remodeling?

No, D & G Handyman Services and Remodeling does not offer warranties.

What services does D & G Handyman Services and Remodeling offer?

D & G Handyman Services and Remodeling offers the following services: Anything the homeowner needs done, if we don't do it, we can refer you to one of our associates or suppliers that do.