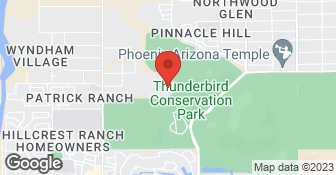 12 employees. Uses subs for specific trades. Cost is determined by the job. No travel charges. No service charges. No extra charge for after hours service. May contact through email....

DO NOT USE THIS COMPANY. The work completed was extremely poor. The original estimate was increased by over $13,000 due to an “error”. Pasty ,owner, used low bid contractors for most of the work. This company was reported to the registrar of contractors in an effort to get the mess my house was left in fixed. Some work was corrected but once Patsy lied the case was closed. Horrible contractor.

Our house was the standard brick and wood so they applied stucco around the entire house and then on the roof we just felt like the ventilation wasn't great but needed to be so they replaced those enter ridge with longer more low profile piece and then put in a couple of spinners and then put in about six low rise vents along the roof so that the air could come in to go out.

Description of Work
I use Apart Builders & Resortation LLC for stucco services. We started of with putting stucco on our house, we've had them install some roof ventilation and we also had them involved for bathroom remodel.

Description of Work
Strorm Damage repairs from October 5 hail storm in Phoenix Az: New roof, flat roof and pitched roof, new fascia, new block wall and partial new side walk new walk gate and drive gate. New AC unit. Also replace any rotten or bad wood on the roof at an extra charge. 1900 square feet of roofing total, 800 pitched and 1100 flat (aprox) 95 linear feet of 8x4x16 block wall, and 45 feet of new side walk replaced from a tree falling onto the property. We had the fence raised 1 1/2 foot and added new gates (1 36" walk gate and 1 16' rolling drive gate) New gas pack AC unit (Trane 3 1/2 ton) New fascia on the south side of the house and paint. Move a shed and move it back after the work was done and re roof the shed (4'x8')

They helped recover our floors and vinyl from our water damage. I have never been treated better. She helped work with us with our deductible due to the insurance.

Description of Work
We have water damage to our trailer.

Bonded
Insured
All statements concerning insurance, licenses, and bonds are informational only, and are self-reported. Since insurance, licenses and bonds can expire and can be cancelled, homeowners should always check such information for themselves.To find more licensing information for your state, visit our Find Licensing Requirements page.
General Information
Free Estimates
No
Eco-Friendly Accreditations
No
Payment Options
Check
Senior Discount
10%
Emergency Service
Yes
Warranties
No

Apart Builders & Resortation LLC is currently rated 3.3 overall out of 5.

No, Apart Builders & Resortation LLC does not offer eco-friendly accreditations.

No, Apart Builders & Resortation LLC does not offer a senior discount.

No, Apart Builders & Resortation LLC does not offer warranties.