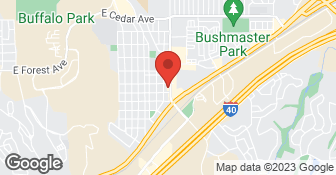 Description of Work
Dave was easy to work with. He finally got Synchrony Bank straightened out.

They did a great job and the carpet is nice.

Description of Work
They installed carpet.

It was our pleasure. Thank you for choosing Highlands Floor Coverings and thank you for taking the time to issue a review.
1.0

We moved into our home a little over a year ago. A few months after we moved in our upstairs tile shower leaked to our first floor. We contacted the contractor (Holdsworth) regarding the issue. The contractor was nice that time to send out the subcontractor who installed our showers. Highland floorings were approximately 3 hours late. We have since had someone else come and tear out our tile shower and found several issues in poor workmanship and very unprofessional work. The shower liner only goes up approximately 3 inches and should go up 6-8 inches, the corners of the shower liner were not sealed properly, the shower pan slopes away from the drain, and the niche in the shower was cut out with a hammer and not a saw. I can send pictures of the poor workmanship. After we tore out the tile in the showers we contacted the company to let them know what we had found. They stated that when they were out at our house they did not see any leakage. It is obvious in the pictures that these were installed incorrectly. Highland floorings knows what they are doing is wrong. By the time a homeowner notices any kind of leakage (since it is small but can do a lot of damage) the warranty has expired. The worse work I have ever seen! Someone without a license could have performed this work and we probably would have been better off.

Description of Work
This provider was the subcontractor when our house was built to install our tile showers. Since we have complained about our showers being installed incorrectly this provider has done nothing to fix it. According to the workmanship standards of the Arizona Registrar of Contractors shower floors need to slope to the drain and if they do not the contractor should make the necessary repairs

I would like to take the time to clarify and fill in some information that is conveniently left out in this review. Yes, we were late the day of the initial call. We were unable to find the lot with the information given by the builder.(this lot was 1 of 50 that we have done in this area). We went back to our shop and attempted to contact the builder to get more precise information. We finally did receive a phone call and returned to the home. When we first received a e-mail regarding this issue by our builder we did state that the home, which was built roughly back in 2005-2007 was well out of warranty. We did agree to visit the home to access the problem and also told the builder that if we find any labor issues related to Highlands that they would be addressed and fixed at our costs. On visit 1 we met with the homeowner. Mr. [removed member name], he told us that the leak was coming from the upstairs shower. He had fist noticed when he saw some drywall damage on the downstairs ceiling. He then told us that he had a friend come over and put some caulking around the drain and he repaired the drywall. All repairs were done prior to our visit so any damage was not visible. He then showed us the downstairs shower and felt their was a leak due to some wet baseboards outside of the shower. These baseboards were dry when we were there. Highlands did plug both drains, brought in water from an outside source and checked for leaks. Both myself and Mr. [removed member name] agreed that we could find no leaks. We then went underneath the house to check for leaks. We could not find no active leaks, only some water damage that we all felt came from when the house was first built and was exposed to the elements. Again, Mr [removed member name] agreed. After finding no leaks we talked to Mr. [removed member name] about that we cannot find any leaks so if you find any more signs of a leak please call us and we will investigate. I do think it is important to state that he did mention that he didn't feel their was an issue but he needed to passify his wife you was hounding him on the issue. Visit 2 we were contacted by his wife. We visited the home again and went through the entire process with her just as we did with her husband, we found no leaks or evidence of any prior leaks. We told her the same thing that we told her husband, please call us if you find any evidence of an active leak. She agreed. Visit 3 was requested though another builder that uses us and asked if we could come take a look at a friends shower for him. We met him at the house, which at that time we recognized it was the Yates residence. We met with the builder and Mr. [removed member name]. Again, there was no evidence of a leak. We explained to the customer and the builder that we cannot tear out a shower without finding any evidence of a leak. The builder and Mr. [removed member name]agreed to not have us tear up their showers. Again, he told us if he finds any issues he would contact us. This was the last time we heard form Mr. [removed member name]. Reading this review is the first I heard about repairs being done. I received no phone call about another company doing repairs and issues being discovered. I am not arguing that their is the possibility that they found issues when the company tore into the shower. My response is to only show that we did everything that a responsible company would do to service a customer. Thank you, Mark Furr
5.0

Pamela Neises was the one who took care of the job. She called and made so many great recommendations and everything turned out so well. The company is licensed, bonded, and insured. She has a very good eye, and is very dependable.

Description of Work
She remodeled the entire inside of the house with her crew.

I will pass on the this great review to Pam. She has been with us since 2002 and we are blessed to have her as part of our team. Thank you, Mark Furr
5.0

Description of Work
They installed the carpet we bought from them. The salesman underestimated how long the installation would take. The installation crew did a wonderful job. Even though I know where the seams are they are impossible to see.

Thank you for making Highlands Floor Coverings you're go to flooring company. We hope to be able to bring you the top notch service you deserve in the future. Thank you, Mark Furr
4.0

Initial estimates were beyond our budget, so she did two more til we hit budget. Many places wouldn't do that.

Description of Work
Removed old tile which did not have an underlayment. Installed cement board and new tile. We should have been warned about how much dust it would cause. Our installer was great-hard worker, not a clock watcher, did professional work. Worked around us.

[member name removed], Thank you for the review. I have noted that we could of done a better job explaining and controlling the dust issue. We hope to continue our relationship and be you floor covering company of choice in the future. Thank you, Mark Furr
4.0

Description of Work
My wife and I visited their showroom and we were very impressed with the professionalism and friendliness of their staff. Quality seemed reasonable and prices were good. Sales rep was honest and told us to expect about $4 to $5 sq ft for installation. The sales rep was more then willing to visit our home and perform a free measurement and analysis. The only reason we did not use Highland was that HD had our tile on sale and we were able to locate a private installer who gave us an incredible deal on the installation. He is no longer in Flagstaff. If the prices were comparable, we would use Highland over HD in a heartbeat!

[member name removed], You gave us the opportunity and in our industry that is all we can ask for. We do hope that your next project you have that give us another one. Thank you, Mark Furr
5.0

Description of Work
They are properly licensed and insured. I have used Pamela Neises. I let her make independent decisions. If you are redoing your place she is the one to use. She is very dependable.

[member name removed], I will pass on this review to Pam and thank you for the business. Mark Furr

Do you want a new floor, backsplash or shower?! Its hard to know who to hire, what all has to be done and what materials you need. We have been helping home owners and businesses with their remodeling needs for over 30 years. We have experts in every field, we will come to your home, give you our free estimate, help you find the best material, give you an installation that we stand by and leave your home better than we found it. Give us a call, we look forward to working with you. Website: http://mcmillanflooring.net Facebook: http://www.facebook.com/mcmillanflooringllc/  …

Phelps Precision Innovations LLC We can build from ground up, from start to finish, whether its new construction or a remodel. What makes us stand out is our prompt service. The owner, Titus Mitchell has been reliable in the construction line of work since 2000. We guarantee your satisfaction and we won’t leave until the job is done right. We pride ourselves on the quality work we provide, while delivering great customer service! Check out all of the services we offer below and call -- or-- click to schedule a free estimate today!  …

Red desert flooring is a company that has been established in the Verde Valley for over 30 years with hundreds of jobs behind us will make your floor look like our house beautiful!  …

HIGHLANDS FLOOR COVERINGS is currently rated 4.3 overall out of 5.

No, HIGHLANDS FLOOR COVERINGS does not offer eco-friendly accreditations.

No, HIGHLANDS FLOOR COVERINGS does not offer warranties.