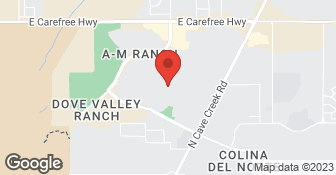 4 employees. Uses subs for digging. Cost is determined by the job. No travel charges. No service charges....

Description of Work
They're supposed to install wooden fence.

Rob Sobzak's Emerald Fence Co. did a terrific job repairing the wall and made the repair blend in seemlessly with the rest of the wall. Rob was extremely proficient at returning phone calls and keeping us updated. I would highly recommend Emerald Fence Co. to anyone who is looking for a real professional to work on their fencing or wall projects Thanks Rob.

Description of Work
We had a block wall damaged by a recent Monsoon storm when a power pole smashed into the wall due to very severe winds. The block wall had to be repaired in a way that would not show the repaired area as appearing different from the undamaged sections of the wall.

They didn't charge for the estimate. There was no problem with it, we just decide to go with somebody. We did the whole landscaping package with someone else.

Description of Work
They gave us a quote and it was pretty high, so we said no.

They got it done and it looks good.

Description of Work
Tear down and reinstall 50 feet of back yard block fence that was damaged by huge tree branches during a storm.

We were told two days, it took seven. They made a terrible mess in our yard, cement on all of our plants and brick trim around the gardens. They trampled some plants and refused to cover others. They left our rock a mess and our hoses were also covered with cement. There was no regard for our property.

Description of Work
Raise our brick wall and stucco

It went amazingly well. As an out-of-state landlord, I appreciated that Rob coordinated with my tenant to get access to the property and make the repair. Several other masons I talked to didn't do bricklaying or quoted me for replacing, instead of repairing, the wall. Rob sent photos of the work in progress and final result. It looks great, and the cost was reasonable . Much appreciated.

Owner Rob Sobzak came to my home and gave me an estimate on the spot. I got several estimates from other contractors. Although not the lowest bid he was able to start right away. The lowest estimate was about $100 less, but with a 2 to 3 week lead time and required a formal exchange of contracts. Rob delivered materials a couple days before Christmas, I signed a simple agreement and two guys came install the concrete posts the day after Christmas as promised. The following Tuesday, two guys came to install the gate. No hassles, everything performed as promised. I hope the other contractors involved in my project will perform as well as Emerald!

Description of Work
Cut existing block wall, added two columns, installed 48" privacy gate. This was required for installation of a propane tank for a kitchen remodel.

Description of Work
Rebuilt a block wall that had fallen due to encroaching tree roots.

It went well, although I gave them the wrong height. After they installed they fixed it with minimal charge.

Fantastic! The quality was excellent and I was very pleased and it surpassed my expectations.

This was a very challenging project as a significant amount of trenching had to be completed for the footings. Terracing was done on a steep slope in the backyard and there was no access for heavy equipment. As most of the hill was caliche this was a hard dig done by hand and jack hammer. The three man work crew worked diligently for more than a week to prep the site for footings and another week or so to complete approximately 100 feet of 3 ft walls and 30 feet of 6 ft wall. I was very pleased with the high quality of the work and the professionalism of the work crew. Looking forward to have them work on a future project.

Went very well! They were great to work with and considering having them finish my other side of the house. My fence looks great and I am happy with the work.

Description of Work
Put up a cement block fence.

Work was completed in a professional manner on time, within budget, and at a fair price. I could not be happier with the end result. Look no further if you need to build a block wall or a retaining wall.

Rob came to give me and estimate. A very nice man, he gave me the feeling of integrity and experience. I had three other quotes for the work, and Emerald Fence quote was two or three hundred less than the others. They were able to do my project a few days later. The workers were respectful and professional and very efficient. They did a perfect job. I could not have been more pleased. Recently I needed some advice on another project I had having to do with railings on my house. Rob was kind enough respond right away and take the time to give me the referrals I needed. Thank you Emerald Fence.

Description of Work
I had a 6ft high block wall that was blocking a lovely view. Emerald Fence cut about 40 ft length down to 2 ft with a tiered effect on each side meeting up with the wall. They stuccoed the wall , feathering up to the existing stucco, then installed iron fencing in place of the wall.

They were on time, on budget, cleaned up and did a great job. Would use them in the future.

Description of Work
Rebuilt a 4 x 4 block wall with tare down and haul away the old wall, install the new block and stucco.

Good craftsmanship, excellent pricing, on site when they say they'll be there. I would strongly recommend Emerald, and will use them again in the future.

Description of Work
The company built a block wall for us.

Rob was terrific. Ready to work, more than I can say for some others I contacted for the job. Very responsive. His crew did a fine job, even with two neighbors involved in the fencing project, I heard no complaints. Fence looks good and the clean-up was better than I expected. Thanks for a job well done.

Rob was very responsive and helpful. he and his crew were prompt, businesslike and did a good job

Tore down and replaced broken block in two planters where palm tree roots had broken blocks. Added rebar for reinforcement and weep holes to allow water to drain. Also, rebuilt a fence column. The work included all supplies, stucco work, and debris haul away. They arrived on the scheduled work day and stayed late to ensure job was completed on time. I would recommend this company.

I first contacted Rob, the owner of the company, back in the spring of 2012 to provide an estimate for repairing a retainer wall that had incurred water damage from the neighbor's ill-draining lawn. He was one, out of a few, estimates that we received back then. He was not the cheapest, nor anywhere near the most expensive, but seemed to be the most confident when it came to the plan of fixing the wall damage. After putting the project off for a year and a half, we decided to finally get the wall fixed. I had kept Rob's information and contacted him for another estimate. To my surprise, he still had my information. He showed up to our house, once again, to examine the damage (which was worse by now) the following day and went over the plan to fix the fence. Unfortunately, the neighbors were not home to discuss the plan to dig up their yard, so Rob went out of his way (on a Saturday) to come back yet another time to get the okay to proceed. Rob and his crew of two others showed up bright and early, on the days that we had agreed upon, and stayed every night well into sunset. Overall he repaired over 100 feet of fence, dug trenches in my neighbors yard so that he could seal the wall, installed numerous drain holes, and even patched a couple of areas on our cement patio. After our job was complete, they did work for the same neighbor who was very pleased with the work that they had done for us. The job was quite an undertaking and Emerald Fence Company stepped up to the challenge. They did a superb job!! Rob and his crew were very polite and professional. I would not hesitate to hire them again for another job.

Description of Work
Repaired approximately 100 feet of a cinder block retaining wall that had significant water damage from the neighbors ill-draining lawn.

We had called several providers before we called Emerald Fence, and no one would get back to us. Emerald Fence came out, gave us an estimate and then came back a few days later and completed the work. They did a very nice job and cleaned up after them selves. The worker that came to do the work, was friendly,polite and well dressed. All in all we were very happy with the service and repair.

Description of Work
We had a step crack in our carport wall. They reparied that and another area that had a lose brick.

It went well. I would hire Emerald again.

I received a prompt estimate and they started the job on the date promised. I was very happy with all aspects of their work.

The owner Rob Sobzak was very responsive in providing a bid on the project, as well as scheduling and starting work on the masonary work for the fence. He and his crew installed the masonary (slump block) structure complete within a couple of days. He then completed exact measurements and ordered the wrought iron railing and gates from his subcontractor (supplier). This subcontractor brought in the railing and gates within about five days and completed the installation in two work days. Rob Sobzak constantly followed up and was there on April 5th for a final inspection and final payment. Both the masonary and railing crews were excellent and corrected any issues that arose immediately.

Castle black masonry is a family of experienced masons. We are a owner operator company, with 45+ years of knowledge in the trade. We provided many different types of work. for example: .All types of block laying .Concrete footings .Concrete pads . Stone/Brick veneer .Radius/Retaining walls. . Anything with concrete or masonry We take pride in our work and stay true to our word. our experience speaks for its self. we hope we are able to help if your next project.  …

We have the experience and dedication to bring your dreams to reality! Specializing in all Hardscape and Paver work, we guarantee your satisfaction, and we won’t leave until the job is done right. We pride ourselves on the quality work we provide, while delivering great customer service! Call or click to schedule a free estimate today!  …

Emerald Fence Co is currently rated 4.8 overall out of 5.

No, Emerald Fence Co does not offer eco-friendly accreditations.

No, Emerald Fence Co does not offer a senior discount.