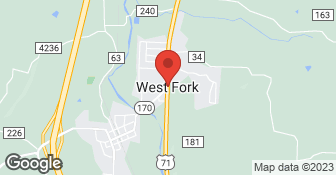 Family owned business, since 1956. We have 4 employees.

This is a second or third generation family busines that is very reasonable. Mr. Rhodes and his son were very polite, totally knowledgeable and skillful. If I have more plumbing problems this is the company I will always call.

Description of Work
Replaced my regulator for my water supply out by the street and did a great job!

I was very impressed with the entire experience.

Office called me 3-4 months after I left two voicemails. Eldest son Mike came out and did the work. His work quality is great, But hes busy with a lot of service calls so on my long job he often left to do other service calls to longterm customers. job took way too long. But end result is way good.

One morning, we turned on the faucets and there was no water. We had noticed a decrease in pressure for a couple of weeks, but that wasn't unusual. We called the city water department, and by the time they got here and left it was noon. They said the problem was in our lines, so we called Rhodes Plumbing. The owner and two of his sons showed up within a very short time, shut the water off, and started work. Our house is 350 feet from the main water line, and we have water lines running to an electric livestock waterer as well. They identified the problem as a broken water line - they just had to find it. It was one of the coldest days of the year, and they worked until dark without success. Mr. Rhodes came to the door and told us they would be back early the next morning. They were back early, found it, and fixed it. They also installed two cutoff valves in case there are any future problems. The Rhodes are prompt, professional, family-owned and operated, and their work and their word is good. We wouldn't use anyone else.

Description of Work
We have several hundred feet of water lines. They found a broken water line, repaired it, and installed two cutoff valves.

He was very polite and answered my questions. Mrs.Rhodes assured me that the work would be done as soon as possible.

Description of Work
Rhodes Plumbing came out very quickly. My toilet was stopped up, and Jonathan Rhodes came and unstopped it.

Residential remodel construction company. We focus on the Northwest Arkansas market within a 40 mile radius. Fast and easy quote process. We take care of all demo and removal for no extra charge. Supervisors and Forman on every job site. We pride ourselves on quality over quantity. We do very unique tile accent walls with color changing flames. Excellent designs for kitchen and bathroom remodels. We do it all!  …

Are you looking for a traditional home or something high-end? Do you like standard builders grade finishes, or do you want to dream up something elaborate? Either way we can work with you to get the exact look you are going for. From French Country, to Modern Farmhouse, to Mediterranean and everything in between, we can accommodate all taste. Already have plans in hand or are you still shopping for that right layout? We can assist in plan selection and finishes. Are you looking for a couple acres in the country, or wanting to settle down in a neighborhood? We can build on your land or help you locate a subdivision lot in town. Or maybe you already own your home and are looking to make some improvements. We do that too!  …

Plumbing of all kinds.

We do not pump septic tanks.

RHODES PLUMBING INC is currently rated 4.8 overall out of 5.

No, RHODES PLUMBING INC does not offer free project estimates.

No, RHODES PLUMBING INC does not offer a senior discount.

No, RHODES PLUMBING INC does not offer warranties.

Are there any services RHODES PLUMBING INC does not offer?

We do not pump septic tanks.