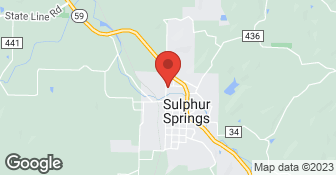 Description of Work
Very unprofessional, constant profanity between roofers,drinking on the job. Doesn't pay roofers to do quality work. Never enough shingles,or caps. Will not claim responsibility if urban insurance does not want to pay for bad work.

I did not use his services.

Description of Work
We called Steve because a friend had used Steve's services and recommended him. Steve responded to our second call and came out to look at the roof. He told me to contact our insurance co. to find out my deductible. He said he would put a temporary tarp on for half of my deductible, but bill for the whole deductible. He claimed that there was hail damage, even though others who have checked it said there was none. I never received an estimate from him, because he was waiting to hear from the insurance co.

They were wonderful went above and beyond and cleaned up all there mess.

Description of Work
Roofed ;my house and put new vents on because I didn't have any.

Steve Holland was responsive. He didn't do the work -- he subcontracted it. He didn't come out to inspect the work when it was done. It has now been a couple of years later and we are having leakage problems in the roof valleys. Water is coming into the house behind the fascia, into the soffits, then down the inside of a window. Called Steve Holland to ask him to come out and take a look at the roof and help us solve the problem. He came out the next day and worked on the roof to help resolve the issue. He added sealant under the shingles on the inside corners and dealt with the drip edge where the two sections of the roofline met. Also showed us how the gutters on one of the inside corners had a longer piece of metal on the inside connection that was causing water to swirl up against and back over the roof edge. He sealed into place a piece of gutter metal that was lying on top of another inside corner, stuck up under the shingles. We appreciate Steve's follow up and attention to helping us with the problem.

Description of Work
Replaced roof due to hail damage.

Holland ordered our materials and had them delivered in the first part of June. They didn't get here to put them on on until late July. The temperatures were extremelt high and as a result, the shingles were brittle and didn't lay down right for quite some time. In the process of removing the old shingles, they ruined one of our window screens. Wen we asked about it, Holland said he'd take care of it. A long time passed, so I called him about it. He didn't answer my phone a few times so I called from a different number and he picked up. He said he'd get to it. Anothe long time passed and when he finally answered, he said he'd thrown away our screen frame. I asked what he was going to do about it and he said he didn't know anybody that could replace it. He said if I could get it replaced, he'd pay for it. We had to order a completely new screen from Anderson windows. When I called him, which he never answered, and left a message, I gave him the price of 44.47 for the new screen. I cannot get an answer out of him to this date.

Description of Work
We had our roof replaced

JMI Roofing Innovation & Construction Plus LLC offered a special discount to Seniors, teachers, fireman, policeman... We guarantee your satisfaction, and we won’t leave until the job is done right. We pride ourselves on the quality work we provide, while delivering great customer service. Check out our services offered and call or click to schedule an estimate today!  …

At Iron Shield Roofing and Restoration, we’re committed to protecting your home or business at all costs. We strive to serve our community and ensure any structure is secured with ultimate improvements from our skilled team of contractors. We specialize in disaster damage and restoration, sanitation and decontamination services, and commercial remodeling.  …

Welcome to Arcadia Roofing and Siding !, We are a full Service residential remodeling company based in Arkansas. We strive to provide all of our clients with "stress free" remodeling experience. Our professional staff will love to help you with your next home improvement project. Our pride is the quality of workmanship that we bring to our beloved clients Contact us today for a FREE estimate  …

All statements concerning insurance, licenses, and bonds are informational only, and are self-reported. Since insurance, licenses and bonds can expire and can be cancelled, homeowners should always check such information for themselves.To find more licensing information for your state, visit our Find Licensing Requirements page.
General Information
Free Estimates
No
Eco-Friendly Accreditations
No
Payment Options
Check
Emergency Service
Yes
Warranties
Ask for details

Holland Roofing LLC is currently rated 3 overall out of 5.

No, Holland Roofing LLC does not offer free project estimates.

No, Holland Roofing LLC does not offer eco-friendly accreditations.

No, Holland Roofing LLC does not offer warranties.