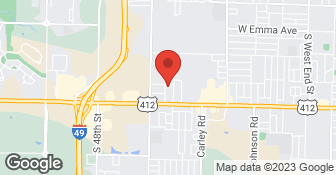 He is an independent contractor and did a good job.

After receiving a good estimate from a lovely young woman who said the work could begin the following week, the job was delayed repeatedly. Two others came from Tommy's and gave different estimates and when we questioned them, we were told the woman "no longer worked" for Tommy's. Eventually, a contract was signed for $2,400 with us supplying all materials and doing all necessary demolition. After a month-long delay, the work was finally done over a long weekend. Turns out this "family" business uses only subcontractors. Further, not only did we pay $2,800 [$400 over the contracted amount, though we had made no changes to the contract], but were contacted yesterday by an attorney in Florida trying to collect $1,000 we supposedly still owe. This happened without a word from Tommy's Tile. We have a signed contract and proof of payment. This whole experience, which began on such a good note with that young woman, has been a nightmare that continues even after the work is done.

Tommy's was a very professional company. He did his work and made suggestions to improve what we were doing.

We did have them come through and do two different jobs. He was easy to work with and flexible on his time. He was very trustworthy, we left him the keys to our house so he could get in. It is a small, self contracted business. There were a couple of things I thought could have been done a little better but it was not anything that destroyed the job. The price was good it was very reasonable.

Description of Work
I used Tommy's Tile for tile installation in our bathroom.

He has done a lot of tile work for me, and he has always done a good, high quality job. He even took me to the supplier with him and gave me the tile at his cost. He shows up when he says he will, and does exactly what he says.

Description of Work
He installed tile in my kitchen and two bathrooms. The total area he worked on was approximately 250 square foot.

Williams Home Remodeling is a Veteran Owned company with more than 25 years of expertise, serving all of Northwest Arkansas. We specialize in bringing your kitchen and bath dreams to life. If you dream it, we'll do it! Check us out on Facebook for updates on our newest projects.  …

We are Fabulous Floors serving all of North West Arkansas. We are family owned and specialize in residential flooring installation of carpet, hardwood, laminate, lvp and all repairs. We provide a professional job from start to finish with a 100 percent satisfaction guarantee.  …

Floors and more by Jason

We specialize in all phases of flooring services, such as laminate, vinyl, hardwood, tile, and more! We guarantee your satisfaction, and we won’t leave until the job is done right. We pride ourselves on the quality work we provide, while delivering great customer service! Check out all the services we offer below and call -or- click to schedule a free estimate today!  …

How is Tommy’s Tile and Floor Covering overall rated?

Tommy’s Tile and Floor Covering is currently rated 4 overall out of 5.

What days are Tommy’s Tile and Floor Covering open?

What payment options does Tommy’s Tile and Floor Covering provide

Does Tommy’s Tile and Floor Covering offer a senior discount?

No, Tommy’s Tile and Floor Covering does not offer a senior discount.

Are warranties offered by Tommy’s Tile and Floor Covering?

What services does Tommy’s Tile and Floor Covering offer?