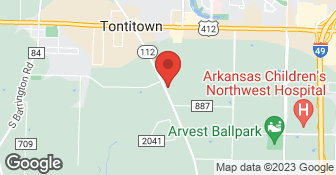 Nightmare. When the materials arrived we only had about half of what we needed. The first day he showed up he did not get to my house until 11a, when he said 7am. He was then gone by 3 pm. The next day he said his partner quit. I offered my sons assistance to help him hang the rock at no charge. 2 days later he asked me for a big favor, his car payment was due and he needed $350. He swore it was a 1 time deal. I told him to take it out of the 800 advance, and he said he did. The next day he did not show up. The next week he said his daughter was sick. He then said he underbid the job because materials and delivery fees went up. I told him he could use my truck to save on delivery fees, and he said that would offset the cost. By the end of the week he said he needed more money for materials, I went to lowes and bought $100 in lumber. I told him to call the rest in to Lowes, and I would pay them direct. $661 dollars later I was assured that was all he needed. He again no showed that Friday and Saturday. When he returned I took the day off from work to help him hang the ceiling, with no deduction from the quote. He showed back up the next day, but then did not show the rest of the week. Said he pulled a muscle. The he called me and said he needed more money for gas because it was taking longer, but would have it done by the end of the week. The week came and went, he would show between 10-12 and leave between 12 and 3. Thinking he was out of motivation for being over budget, I told him I would absorb the material cost, and the $1000 for labor would be great and still due at the end. The next Monday (after not showing again that weekend, was told by his wife he was buying an air conditioner for the house) He hit my wife up for more money, said the job would be done by weeks end. We gave him 100 that morning, and 200 more the next day to try and give him incentive to come back. He did for two days with little progress. I called and said I thought we would still be short an materials, he agreed and we put in another order to Lowes. I mentioned one of his framings were off level by about an inch, and he said he had noticed it and would fix it. He got the next load of $161, then no call no showed for 4 days. He called me Sunday and said he needed more money. I told him we would see how the work went. He showed the next day, hung two sheets over the unlevel frame he never fixed, picked up his stuff without saying a word, pulled his sign and left. I called him the next day and he said he could not work without money. I asked whatever happened to the first agreement, and I thought we had a second agreement, with no money up front. I am now $2151 in the hole on a $1554 quote,and 32 days on an 8 day project. Then he put his partner on the phone who said I was crazy to expect so much work for so little. They offered to make a new quote to finish. She then told me off, said her phone was going dead and then hung up. They have not answered their phone since.

Description of Work
I am remodeling my basement, and recieved a price quote of $1554 to sheetrock, mud and texture most of the basement. I was told 100% satisafction guarantee, 8 days from start to finish, and the only upfront cost was materials, then the remainder once I was satisfied. I was told he works from 7am till night 6 days a week, taking only Sundays off. I agreed and was told about $550 was needed upfront for materials. I wrote a check for $800 in good faith. To good to be true, yes.

Family Owned since '14 Moran's Painting will give you a personable experience with quality work and nothing less!  …

We offer quality and affordable painting services for interior/exterior residential and commercial projects.  …

How is 3 AM Remodeling overall rated?

3 AM Remodeling is currently rated 1 overall out of 5.

Does 3 AM Remodeling offer eco-friendly accreditations?

No, 3 AM Remodeling does not offer eco-friendly accreditations.

What services does 3 AM Remodeling offer?