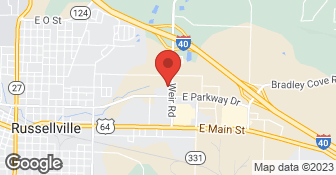 Arkansas Restoration Services, Inc. has been at it's current location for over 20 years and is locally owned and operated.

Would not give a written estimate. This shows traits of a dishonest company that will add on issue after issue once a project starts and will cost homeowners lits of money.

Description of Work
Bathroom renovation due to water damage.

Al came over for detailed estimate but never provided HALF the services his estimate listed. We were to have a "pod" for living room furnishings, tenting in two door ways to keep vinyl glue fumes away from infirmed residents in the home, flooring in an un-involved room (the entire kitchen), these were in his original estimate... but never delivered. He included in his estimate erroneous charges for two bedrooms, specifically to raise the carpets and clean them then relay them for a price. But one of his workers told us, there is no such service available as what he'd described in his estimate. It seemed he was adding services that had nothing to do with the repair. He kindly said he'd work with us to avoid our having to pay our insurance deductible but as it turned out he was wanting to charge just over the deductible... But he would instead accept (to our expected relief) the total amount of the check issued by our insurance! This is clear to me now, in hindsight because in our conversation, before ANY work was started, he mentioned we would probably pay only 700$ instead of our $1,000 deductible. The final invoice was never itemized. The initial amount included (verbally) all the abovementioned extra services, but when those were disputed, he backed down and simply accepted the amount of the insurance check (still, no itemized invoice). His intention was quite clear when the work was completed, that we would still owe more than the insurance check... VERY unprofessional. Would not recommend.

Description of Work
Tree blown on house, covered roof with tarp, repaired rain damage inside house, ceiling repaired, flooring replaced, guys doing flooring were amateurs. I can not remember the day and year as your program will not let me go back that far.

Description of Work
padded insurance allowance and billed me 1800.00over and above insurance payout after assuring me over and over that my insurance would cover the restoration of a flooded home. plus my $500 deductible. My insurance co |battled their charges for several months. Expect to be taken financially.

They immediately came out, took up all the damaged area, put fans on the area and got to working on ordering everything we needed to get the job done. Very happy with results and time frame. It was a big job.

Description of Work
Did a top to bottom clean on my mother's house to get it ready to sell. Walls, carpets, floors, bathrooms--the works. Ran their ozone machine a couple of days to get the "musty" smell out. Not their usual line of work, but the owner is a friend, and had a couple of employees that weren't on other jobs. :)

Extremely responsive in giving a written estimate and following up with a date when they could do the work. Estimated 3-4 days to do the work. Finished in 1.5 days. Called, each day, before they arrived to make sure it was still convenient for me. Workers were professional, courteous and friendly. Repaired water damage in ceiling. Room looked better than before the damage. I plan to use them again and will recommend them to anyone who asks. They covered floors and cabinets to make sure they were clean. They cleaned as they worked and cleaned up after finishing. Even cleaned parts of the garage floor where they worked.

AR Restoration took on this job with knowledge, reassuring me that home would be completely restored. I picked out new carpets, floorings, paint colors and stayed out of their way. I couldn't be more satisfied and happy with all phases of this restoration.

Description of Work
Hot water tank burst, tenants gone for 4 days while water flooded house. All flooring & carpeting destroyed throughout home, some wallboard and insulation soaked. AR Restoration was there within an hour to began pumping out water and pulling carpets etc. They completely restored home even better than before damages.

It went very well, even got them to paint my garage while the were on site. Very professional

This company was sent by my insurance company because they could handle all the needed work. But since I already had received estimates from two other firms I had was able to compare prices and more importantly amounts of materials claimed to be needed. This company exceeded all the others on amounts of shingles needed, feet of fascia and gutters. They also charged far more the cover to the a/c unit than the original installer reported would be the cost including shipping and installation. They sub-contracted some of the work and I had to get them to send the workers back to re-do very poor work quality work (they put a diagonal patch over a horizontal area--it looked straight from the hillbilly woods). Yes, I am saying they are dishonest and I will not use them again.

They were wonderful. They were speedy to respond to our need and made a very difficult situation as easy as could be.

They worked with us on timing issues. They went above and beyond. They made it easy and less stressful for us.

Description of Work
They provided restoration services for damage that was caused by a leak in the heating and cooling system.

They stole many items/tools and building materials from my property which is under construction. When confronted they were rude and denied it. The only ones with access are me, them and the property owner of the adjacent property that they were hired by. I know for a fact the other property owner didn't do it. After talking with the person in charge I was told they would stay out of my property to avoid further trouble. A few days later they had their portable workbench setup there because it was too cold for them outside. These guys are nothing but trouble.

Description of Work
These guys were working on a property next to mine that shares an entrance with my property.

In business since 1991 with the highest certified technicians in Arkansas. We are a family oriented business with a focus on customer service, and strive to put a smile on your face.Pay at the time of service. We also service commercial locations. Contact (501) 690-3825 to schedule your appointment today!  …

Pure Air Of The Ozarks

Our cutting-edge Dry Fog technology is the leading solution for homeowners and businesses alike, as it is widely used across many industries in eliminating mold. Mold is indiscriminate as to where and what types of facilities it affects. Our process was developed so that it can be applied anywhere and everywhere mold appears without requiring demolition, toxic chemicals, significant cost or down-time. Regular business hours are Monday through Friday from 8am to 5pm. Weekends and evenings can be arranged as needed by appointment.  …

We expertly install custom-made vinyl windows & vinyl siding which will deliver unmatched beauty, strength & energy savings as well as enhance the architectural style of your Arkansas home. Cape Cod, country French, Colonial, Victorian, Tudor, Craftsman, cottage, Mediterranean, ranch, traditional or contemporary style home owners can let their imaginations run wild with the possibilities. We will help you find the specific style, performance and budget that meet your needs! We do not do repairs on homes that we did not do the installation on.  …

ARKANSAS RESTORATION SVC INC is currently rated 4 overall out of 5.

No, ARKANSAS RESTORATION SVC INC does not offer a senior discount.

No, ARKANSAS RESTORATION SVC INC does not offer warranties.

Are there any services ARKANSAS RESTORATION SVC INC does not offer?