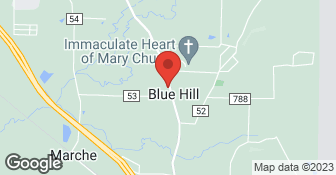 Our goal is to provide top quality service and installation for all the comfort needs that properly installed and maintained heating and air conditioning systems bring. Bob & Ed’s Heating & Air Conditioning has been proudly servicing Central Arkansas families & businesses since 1972, and to ensure we continue to provide top quality service to each of our customers we only employ craftsmen who are highly skilled and technically qualified. We provide all of our installers and technicians continuing education to keep them up with the latest EPA standards. We are committed to reducing downtime and to providing fast, quality repairs – done right the first time – at a money saving price. Bob & Ed’s is known for being a small organization that offers top-notch personalized customer service. And because we are a small company, our lower overhead allows us to transfer savings to our customers

THEY MADE TWO TRIPS, DID"NT FIX THE FIRST TIME THAN OVERCHARGED ME FOR A PART,. THE PART LIST PRICE IS $18.98 THEY CHARGED ME $113.00. THEY SAID THERE WAS NO CHARGE FOR THE SECOND CALL, THEY BUILT THE CALL INTO THE PRICE OF THE PART. THATS DISHONEST.

Tech diagnosed the problem quickly. Repaired sensor and showed me how to fix should it ever happen again!

Description of Work
Furnace would not stay on.

it went very well. They came almost immediately, got the parts within a day, and did the work quickly.

Description of Work
Repair of heating portion of an AC \ heat all in one unit.

I've worked with Bob & Ed's before. They were prompt, professional and had a competitive price. Will definitely use again!

Very well, The price was 5-10% less than the other two companies, and the unit was more highly rated and fit the space better than the others. The sheetmetal transition ducting is beautiful and much better than what it replaced.

Great! The job was more involved and took longer than they anticipated, but they stayed with it and made sure everything was taken care of appropriately within the cost of the original bid. That's some "customer-first" service to be sure! There was a minor miscommunication about final clean-up, but Doug and Beverly and the rest of their team were champion professionals in getting this resolved. Excellent work all the way around!

Description of Work
The duct work under a 1930s bungalow needed replaced and brought up to current code.

It went really well. They were very professional and showed up on time. They explained what they were going to do. They were unable to do the duct work on the same day however they scheduled it the time that was good for me. I think their prices are fair. I would definitely hire them again.

Description of Work
I needed the annual heat and AC inspections done period I also needed ductwork repaired underneath my house.

They were professional, on time, thorough and explained their work

Description of Work
annual service of furnace and air conditioner

Everything went great. The technician had installed new thermostat and checked the units quickly.

Description of Work
I had general maintenance on my 2 units and a new thermostat put in.

Called them on a Saturday. On-call guy called right away, happened to be nearby and was at my house in 30 min. Prompt, efficient, friendly, reasonable. Great experience.

I have used this business several times since purchasing my house. They inspected the until before I purchased the house and managed to get the unit working with some time and problem solving. Home warranty replaced the unit last year but heat went out this week. They have and after hours service for emergencies and a 24 hour message service. Left a message late one night and got a call first immediately the next morning. My unit was repaired less than 12 hours from the phone call. AND, when I was talking about the age of the unit, The serviceman said he would check on the warranty of my unit when he left to get the part. He returned and said that Bryant would honor the warranty. HOW HONEST IS THIS COMPANY? I know that other service providers would have wanted to charge me and go on, but the effort of this man and his company saved ME over 450 dollars! All of the service guys I've met are really fantastic, honest great people. The house had a very old thermostat, and they replaced that as well. This is the only company I can recommend. I've owned many properties in the 3 decades I've lived in Arkansas, including rentals. I've had a lot of frustration with many service providers but will use this company exclusively. It is VERY hard to find a company that stands by their commitment to time. The employees call when they say they will, they always show up ON TIME when they say they will. Thanks to Angie's List on this one. Wouldn't have known about this company without the ability to read profile/reviews of top rated companies.

Description of Work
Heat quit working on night, called to get it repaired. I also needed a thermostat replaced. I've used them previously for inspections and other issues.

Description of Work
Cleaned our coils for the AC unit

I called for an estimate and John came out the next day and gave me a quote to replace the entire system that was well below previous estimates. It took about week for them come out and replace the unit due to it being the middle of summer and being busy. It took most of the day but they got it in and up and running before they left. Communication with them was great and they were very professional and prompt. I recommend them to anyone.

Very smooth. Showed up exactly on time. Explained the service and answered all my questions. Very professional.

Description of Work
Serviced the A/C unit and fan. Charged the Freon.

They were there on time, did the job that I asked for, and didn't try to sell me anything. You can't beat that!

Description of Work
Tuned up my A/C

I have been using Bob & Ed's for years! They are very good and reasonably priced!

It went very well. I highly recommend them. We have used them for many years.

I liked that he didn't try to get me to buy something I didn't need and made sure everything was working correctly before he left.

Description of Work
Air conditioner not working. He thoroughly checked unit inside and outside and replaced the capacitor.

I found them on Angie's List because my previous company sold to someone else. They have serviced my heating and AC ever since. I have always felt their prices to be reasonable. They are prompt, professional and very kind! I give them the highest rating there is!

Description of Work
They did not charge me when they first came about this problem even though it was unrelated to the previous visit! Today they looked further into the problem and made sure it was fixed!

They save me money as they found the furnace was still under warranty. The new exterior unit failed within a week, but they were prompt in replacing it. Since then, no problems. Since this service was 3 years ago, I don't have the cost of the project, but as I recall it was fair.

Description of Work
Their service was great they replaced a heat pump exterior unit and the furnace.

Came home from Church. smelled gas in house. Called Bob and Ed's and they sent help asap. Always easy to deal with and friendly. Repaired the leak and mailed bill later. Really appreciate their competent service.

I contacted Bob and Ed's and they IMMEDIATELY sent someone to my house. The young man was nice and it only took about 5 minutes to diagnose the problem. He was at my house for only a short period of time. I had a small glitch, and he came back right away and worked on that. I appreciate their response and good nature.

Description of Work
Diagnosed the problem, cleaned the unit. Repaired a bad part.

Bob and Ed's had put a 95% efficiency furnace in my daughter's house last October. We opted not to do the A/C at that time because of cost, but knew the system was on it's last legs (37 year old unit). When it died in early July I called Bob and Ed's to replace it. Both the furnace and the A/C are top notch and perform exactly as they should. Their techs are very knowledgeable, and Doug and John, the owners, have been very easy to deal with. They did not try to oversell nor did they give me a lowball estimate then tack things on at the end to raise the price. They charged exactly what they quoted, which was in the middle range of bids I took. Last fall, when the furnace quit on the first cold day, they bumped my daughter's job up and came the next day because she had a nine day old baby. I really appreciated that. When they were late by four hours to put the A/C in it was because they had done something similar for another customer. I was perfectly fine with that, and appreciate dealing with businesses who take their customer's extraordinary needs into consideration. Good people, quality product, fair price. I'd recommend them to anybody.

Called Bob and Eds on a Saturday and paid extra for this service. Technician called quickly, came when he said he would, diagnosed the problem and made repairs. I am pleased with the process and will use this company again.

Description of Work
Provider replaced burned component in A/C. Then serviced and cleaned the coils.

With God first we are reliable, professional, and very experienced electrical company for home and business! Call us for all your electrical needs such as new house wire, old house rewire, new panel installs, lights, fans, fixtures portable generator install, fixing any and all electrical issues!  …

Bonded
Insured
All statements concerning insurance, licenses, and bonds are informational only, and are self-reported. Since insurance, licenses and bonds can expire and can be cancelled, homeowners should always check such information for themselves.To find more licensing information for your state, visit our Find Licensing Requirements page.
General Information
Free Estimates
Ask for Details
Eco-Friendly Accreditations
No
Payment Options
Check, Visa, MasterCard, Discover
Senior Discount
No
Emergency Service
Yes
Warranties
Ask for details

No, Bob & Ed's Heating & Air Conditioning does not offer a senior discount.

No, Bob & Ed's Heating & Air Conditioning does not offer warranties.