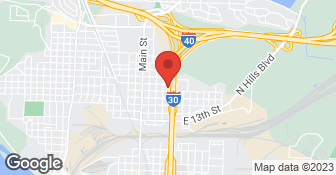 Since 1980, Advantage Service Company has been the leader in servicing the heating, cooling, plumbing, and electrical needs of homes and businesses in central Arkansas. Advantage Service is a family owned business and today has a team of more than 50 technicians and staff members who are dedicated to giving you the highest level of service....

Over the course of 1 year, I had a contract with Advantage. I noticed a pattern with some of the guys. They came in and talked and talked (I too did some of the talking) not related to the work they were hired to do. I got charged for all the time they spend at the house. I called them once to check the noise the washer was making. They showed up early, and washer was running. He talked to me for 30 minutes saying he had to wait until washer was done. After 30 minutes he stopped the washer, took the front cover off, and told me it would be cheaper to get a new washer than to have it fixed. I got charged for 45 min’s of work. Also, at times the tech came with a helper. One time the helper only went to the truck to get things. I ended up paying for 2 people doing the work. I don’t think it is right to pay for a helper, when the helper is not doing any real work, probably just learning the trade. I must say any and all work done, was done right.

Description of Work
Over the course of 1 year, I had a contract with Advantage. They did plumbing, electric, HVAC, large appliance. In some cases came out more than once for various projects.

Technician came and figured out that the drain lines froze and tripped the safety mechanism, shutting down the unit. He cleared the ice from the lines he could access, requesting that I run a space heater near the remainder of the lines. He got the unit running again and I haven't had issues since.

Came out same day called on Sunday New Year's Eve with record cold staring us in the face. Had it fixed in 30 minutes. Would highly recommend.

Description of Work
Heating was out.

Description of Work
Electrical malfunction. Thought I popped a breaker replacing a fixture in my closet. Wasnt a breaker and had to call for an Electrician.

Advantage responded well and the technician kept me informed as to arrival time. He was finishing another job. They told me the weekend price $95 the first half hour and $65 each half hour after that. They fixed the leak between the house and the box. The technician told me that the line need to be replaced and explained why. This is probably true because the same thing happened in 2015.

Description of Work
Water leak repaired in my yard on Saturday morning. It was bubbling up and a large amount of water had leaked.

This is a new construction home. When we had a new washer/dryer delivered, we thought something was wrong with the dryer because every time we tried to use it it went dead. We had someone come out to check out the dyer and found it was actually a bad switch in the electrical panel that was being thrown when the dryer was turned on. We contacted the builder, who was suppose to send out their electrician, but after a couple of weeks waiting for them, we gave up and called Advantage Service. There was an electrician out within about an hour. He quickly went to work to diagnose and fix the problem. We were extremely please with the speed of service and the reasonable price.

I ended up not using them for that because they got nasty with me. They kept cutting me off. They screwed up a few times on the appointments. I'm standing here waiting and I can't go anywhere. Whoever was the manager at that time, got nasty on the phone with me like he was more important than the customer. I got angry.

Description of Work
I had a plumbing problem that needed to be fixed. I had a toilet clogged up.

They did a good job with this.

Description of Work
I used them to put in my new water heater.

Very professional from start to finish! Very punctual, and the technician (his name was Thomas) was extremely helpful and went out of his way to ensure that the customer was well taken care of! Very positive experience, and I will use them again!!!!!

A+ BBB, Family owned since 1977, Central One Service LLC provides Residential Electrical Service, Repair, and Installations. We also provide Residential Appliance Repair, Heat & Air, and Refrigeration . Started in 1977, Three Generations of our family have owned and operated the company. We take pride in our craftsmanship and stand behind our work 100%, giving you peace of mind that your problem will be resolved efficiently and effectively. To schedule an appointment, Call 501-940-9095  …

Specializing in AIR DUCT CLEANING! We always guarantee your satisfaction and won’t leave until the job is done right. We take pride in ourselves and on the quality work we provide, while always delivering great customer service! Check out our services offered, then call --or-- click to schedule a free estimate today!  …

Advantage Service Company is currently rated 4.5 overall out of 5.

No, Advantage Service Company does not offer a senior discount.

Are there any services Advantage Service Company does not offer?