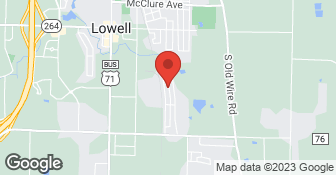 We offer a wide variety of services from partial remodels to whole house construction. We pride ourselves on bringing the most experienced hands available on our staff to your project. Our materials are bought from local and reputable manufacturers, allowing us to keep our prices down, quality high and to give back to our local economy. And because we handle all aspects of the job from start to finish, we ensure a quality result

Throughout the experience it felt like two steps forward one step (or multiple steps) back. Items went missing (gardening tools and a bench). Painters caused splatter on woodwork (which I'm now refinishing by hand as a result). Staining was sloppy and unfinished -- stain spilled all over sanded floors, requiring 3/4 round (as opposed to the 1/4 contractor initially laid) to cover unsightly stains once the floor was refinished. Vinyl flooring was not glued to substrate throughout entire sun room -- large sections are not glued at all and lift with vacuuming. Continually, execution created fresh problems and more work (and thus more more expense!). Bathroom was never finished. Trim remains bare in spots, stain uneven and inconsistently finished (little to no protective coating). Stain spatter got on walls (and was never addressed). Defects (gaps) remain in fresh drywall around electrical outlets. Roof work was not completed (paid for shingling, structural work and cedar shake gables and only received the shingles). Contractor's roofer made two holes in roof eaves, left a satellite dish dangling off side of house (still dangling), and damaged the gutters (another new expense)! Last heard from contractor on June 29th. Said he would be at the house on July 3rd to address issues and wrap up, but he never showed up. Repeated attempts to get a hold of the contractor have been unsuccessful. His roofer came by the house looking for him because the contractor never paid him for the shingling work. Contractor has apparently also moved from his address within the month (his residential address is the same as his business address). So, in addition to not finishing original work outlined in the contract, the contractor took the roof money and ran. This is merely a brief summary. The list of issues is too long to include here. I have photos and full correspondence history for anyone requiring details. I'm not here to inflame; merely here to inform and protect other consumers. Turns out this contractor has a criminal record (burglary, for which he served time in the late 90s, and an arrest in 2011 for Terroristic threatening, 3rd degree battery, and 1st degree criminal mischief (Google search: Christopher D. Conduff). Not that a criminal record is an indicator of future behavior, but it does give one pause. Only found it because I was searching for alternative contact info, since he'd bailed. Previous searches, prior to the start of work, only returned positive reports and positive recommendations (one of which I could have sworn I read here on Angie's list but appears to have been deleted). Bottom Line: Trim Plus Constructionworks is bad news. Stay away from these guys.

Description of Work
Entered into a contract with Trim Plus Constructionworks on December 27, 2011 to have extensive remodeling work done at house in historic district, Fayetteville, Arkansas. Works was to include, among other items, re-trimming/staining throughout kitchen, dining room, living room, bedrooms, hall, and bathroom, rewiring entire house, and replacing sink and bathtub faucets/fixtures, including the shower rod. The following were added to the original estimate: 12 new windows/inserts, a kitchen remod, sun room remod, and roof work (to include asphalt shingling, structural work, and cedar shake for all three gables).

Residential remodel construction company. We focus on the Northwest Arkansas market within a 40 mile radius. Fast and easy quote process. We take care of all demo and removal for no extra charge. Supervisors and Forman on every job site. We pride ourselves on quality over quantity. We do very unique tile accent walls with color changing flames. Excellent designs for kitchen and bathroom remodels. We do it all!  …

We install driveways.sand.dirt gravel we do demolition of old structures that needs to be torn down we build roads and repair them we also put in culvert for drainage. We guarantee your satisfaction and we won’t leave until the job is done right. We pride ourselves on the quality work we provide, while delivering great customer service! Check out our services offered and call or click to schedule a free estimate today.  …

Over 12 year experience We specialize in gutter services, installs, replacements, repairs, guards, and more! We guarantee your satisfaction, and we won’t leave until the job is done right. We pride ourselves on the quality work we provide, while delivering great customer service! Check out all the services we offer below and call -or- click to schedule a free estimate today!  …

How is Trim Plus ConstructionWorks, LLC. overall rated?

Trim Plus ConstructionWorks, LLC. is currently rated 1 overall out of 5.

What days are Trim Plus ConstructionWorks, LLC. open?

Trim Plus ConstructionWorks, LLC. is open:

What payment options does Trim Plus ConstructionWorks, LLC. provide

No, Trim Plus ConstructionWorks, LLC. does not offer free project estimates.

Does Trim Plus ConstructionWorks, LLC. offer a senior discount?

No, Trim Plus ConstructionWorks, LLC. does not offer a senior discount.

Are warranties offered by Trim Plus ConstructionWorks, LLC.?

What services does Trim Plus ConstructionWorks, LLC. offer?