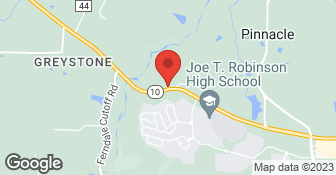 We are a small company locatied in west pulaski county , .providing quilty dirt work and dumptrucking for over 10 years locally owned and orperatied . we accept most major cerdit and debit cards .

In April 2021, Randy Fletcher, owner of RW Fletcher Excavation and Hauling agree to deliver a truck load of dirt and landscape a garden pad where a set of raised garden beds would be built, so that water would drain away from the pad. When he started work, his dump truck, full of dirt, got buried axle deep in mud/dirt. A tow truck proceeded to pull the truck out, damaging the entire 200’ of frontage in front of my house and leaving a trail of 2’ deep trenches and a huge pile of dirt in the front where the truck had “dumped” the load in order to be pulled out. Irrigation hose was also damaged. Although the resulting damage and pile of dirt was an eyesore in front of my home, we both agreed to wait for Summer (for the dirt to harden) for him to complete the work. In June, a friend did a huge favor and spent an entire half day in June with his small tractor and moved the dirt into the trenches and smoothed out the frontage in front of my home. I did this to save Randy the trouble since he was having to come back and complete the original job. I patiently waited until the first week in September, Randy finally came back. As he left, he admitted he should have “lasered it” but that it would have taken another hour or two. There was rain following Randy’s work, and to my dismay, instead of draining down the embankment, there was a muddy depression in the middle of the garden pad. I sent Randy a phone text on September 15, 2021 with a photo of the pool of water and requesting he return with the small tractor to move some dirt as appropriate so that the water would drain down as we had agreed. At one point he agreed to stop by on Sept 30 to finish, but he never showed. I have been calling, leaving voice mails, stopping by his lot, and texting with no luck at all. He has left me hanging completely and I have had to file a small claims. I am now trying to find someone to finish his job. Randy Fletcher and his company is unreliable and lacks integrity. He has been paid in full, but has refused to complete the job. Avoid this company.

For the quickest response please call Garry at (501) 516-1439 and mention Angie's List! Garry Bryant started landscaping in his early 20s, after serving in the U.S. Air Force. He started his business under the name of Garry's Lawn Care, and over the years, he has expanded his services, specializing in all landscape needs, and yard maintenance. Now, as Bryant Family Landscape Escapes, Garry's son, Matt, has joined the business. They work hard to cover most of the central Arkansas area and have earned nearly 40 "A" reviews on Angie's List. They look forward to creating your escape! Ask about our Fall Clean-Ups! CALL Garry at 501-516-1439 TODAY! Facebook: https://www.facebook.com/Bryant-Family-Landscape-Escapes-288774018612145/  …

Insured
All statements concerning insurance, licenses, and bonds are informational only, and are self-reported. Since insurance, licenses and bonds can expire and can be cancelled, homeowners should always check such information for themselves.To find more licensing information for your state, visit our Find Licensing Requirements page.
General Information
Free Estimates
No
Eco-Friendly Accreditations
No
Payment Options
Check, Visa, MasterCard, Discover
Senior Discount
No
Emergency Service
Yes
Warranties
Ask for details

How is R.W.Fletcher Excavating and Hauling overall rated?

R.W.Fletcher Excavating and Hauling is currently rated 1 overall out of 5.

What days are R.W.Fletcher Excavating and Hauling open?

R.W.Fletcher Excavating and Hauling is open:

What payment options does R.W.Fletcher Excavating and Hauling provide

No, R.W.Fletcher Excavating and Hauling does not offer free project estimates.

No, R.W.Fletcher Excavating and Hauling does not offer eco-friendly accreditations.

Does R.W.Fletcher Excavating and Hauling offer a senior discount?

No, R.W.Fletcher Excavating and Hauling does not offer a senior discount.

Are warranties offered by R.W.Fletcher Excavating and Hauling?

No, R.W.Fletcher Excavating and Hauling does not offer warranties.

What services does R.W.Fletcher Excavating and Hauling offer?