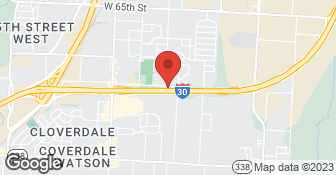 Absolutely wonderful. Easiet process ever. I was really worried and they eased my mind and wallet. Super friendly.

They gave an estimate and described their recommendation. The quote was more than I expected and the proposed work was not going to meet my needs.

The project went fantastic. They took amazing care with my deck and plants. I hope I never need them again but if I do they will be my first call.

Very professional service;. They kept us informed about what they were doing and the nature of the problem and repairs. Work was done in a timely manner.

olshan thought I didn't need more than minor repairs that would be more expensive if I used them. I appreciated that.

It went in the backyard.

Description of Work
Drain installation due to flooding.

Read terms and conditions very close before you decide to use them, in what they presented to me I was unwilling to proceed. READ CLOSELY.

My elderly mother's house has many cracks in the walls, and the front door at times is very difficult to close and lock. She even got locked out of the house once because the key wouldn't turn in the door, which has been raised and lowered repeatedly. That scared her and she sought an estimate of how much it would cost and what would be involved in getting the house leveled again(It had been done in 1987, too). Her contractor arranged for the man from Olshan to come out, which he did. After carefully looking at the cracks and asking questions about the house's construction, he used an electronic device to compare the changes in the levels of the various parts of the house. He found as much as 9 inches difference from the front to the back of the house. He said that a newly constucted 30ft wall should have no more than 3/4and quot; change from one end to the other. We sat down to talk about the situation and he told us the house and the whole neighborhood were built on an area of expanding clay (we already knew this) and that although the 1987 work done by another company was pretty good for the technology available then, unless the concrete pillars they installed had reached down to solid rock(and this clay is as much as 14 ft deep in some areas), the cracks would return and continue, which they have. Now here is where his honesty and integrity really kick in---he said that because there was no way to guarantee the work (Olshan does a lifetime guarantee), they would NOT do a foundation and quot;Repairand quot; on the house. He talked about the seasonal nature of the clay's expanding and contracting, and told us if they were to do the work, the presence of the concrete pillars from the previous work would make it even harder to put in their piers (they would have to drill through the old ones--very expensive!). He said we could spent a lot of money and have cracks again within six months. So this young man apologized and declined to do the job! WOW! Honesty and integrity! We were impressed and thanked him.

Description of Work
Analysis of foundation problems of my mother's house, which was built in 1960. The young man looked all around the house inside and out, and used a sort of electronic level to compare various areas in the house to see how much difference there was in the level (height?)of those areas of the house.

They are extremely professional. They got the job done quickly and cleaned up nicely.

Description of Work
I had to have my foundation repaired.

After some recent heavy rains, our tenant called to report that water was intruding into the pantry, laundry room and dining room. OLSHAN had installed a french drain across the back of the house. During installation one of the supervisors had informed me and my husband that it would be maintained and flushed out periodically to ensure proper operation. Warranty options on the drain were never explained to us, or addressed on the contract. Because keeping water from the foundation was one of OLSHAN's most adamantly stated goals, we believed they would do the maintenance that was explained to us. To my knowledge, none has been performed. The two representatives who met my husband at the house on April 26th began with a firm denial that the french drain could keep water from the house. They said it was a water management drain, not a flood control device. He told them he was aware of that fact, and merely wanted their recommendation on how we could keep water from entering the house. They offered no recommendation. They asked him over and over what he wanted from them. When he responded he wanted a recommended solution, they offered none. In fact, they acted as though they were extremely upset that they were even there. It soon became apparent that they had no intention of offering any assistance. He finally asked them to leave and they did so without any hint of concern for a paying customer. I'm sure the staff at Little Rock's OLSHAN office considers him an unreasonable and demanding person. Since graduating from the U. S. Naval Academy and serving our country for over twenty-six years, he has always expected honesty and integrity from individuals and organizations with which we have been associated. OLSHAN has shown us nothing except rudeness and a complete denial of any responsibility. Given that, yes, one might be tempted to be unreasonable and demanding. We do not expect anything further from such a company. This letter is simply meant to document what we believe to be a thoroughly unprofessional performance and perhaps save other consumers from a similar experience.

Description of Work
Three years ago my husband and I hired the Little Rock office of OLSHAN to repair the foundation of our rental property at 11 Red Oak Place in Maumelle, AR. Since it is a relatively small house, we were reluctant to spend their fee of $33,440.00, but they were insistent that it would be money well spent. Our next contact with OLSHAN occurred a few months ago when we asked a representative to evaluate some new cracks in the interior walls. It took quite some time to get an appointment, but he eventually agreed to meet us. His immediate response was that there was no way to prevent all settling, and the degree to which it had further settled did not merit reevaluation. Despite our trying to reason with him, he stated that he would do nothing until the settling became much more apparent. This event sparked a notion that OLSHAN's guarantee might just be a paper tiger. The ensuing event convinced us even further.

Work started the day the company said it would. Took an extra day than originally told, but the weather was above 100 degrees on the days the crew worked. Very pleased with work, crew and Aaron.

Small local family-owned plumbing business servicing all your plumbing needs. Our mission is to deliver value to our customer. Value demands we render high quality service, with integrity, in a professional manner, at a fair price. To be recognized by all our customers as an excellent provider of professional, honest and skilled plumbing services and customer care. To provide our customers only top quality materials and name brands that command public trust.  …

Our specialists will evaluate your homes problem and propose a solution at no cost to you. We accept various forms of payment including financing. Find us on Facebookfor a coupon for your project. We invite you to visit our website www.redeemersgroup.com to see case studies of projects like yours, and to view additional independent reviews from our clients. We offer a transferable warranty, which means if you sell your home, the warranty transfers to the new owner. Additionally, we are part of the Basement Systems and Supportworks national dealer networks.  …

Olshan Foundation Repair is currently rated 4.6 overall out of 5.

No, Olshan Foundation Repair does not offer eco-friendly accreditations.