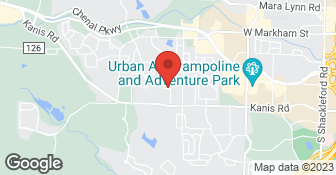 Very well. He indicated initially that he would not be available for several days but showed up the next day and repaired the leak in one hour. He left a note on the receipt for the water company about the leak and we were able to get a credit on our next month's water bill. We have been using him for several years and have always been happy with his work. He stays very busy and cannot always come out right away but he does quality work at a reasonable price.

Description of Work
Repaired a leak in an outside water pipe.

Noticed water leaking from the ceiling in the downstairs utility room on Sunday. Called Steven at Euells on Monday. He arrived shortly after being called since he was in the neighborhood. He found the problem (water leaking from the upstairs toilet seal. Replaced it and no more leak. Highly recommended!

Description of Work
Fixed a leak coming from an upstairs bathroom

I had work done on rebuilding a couple of toilets, one of them kept squirting every 4-5 minutes...drove my wife nuts. Called back the original service company, they determined that the water pressure was too high and that the gauge needed to be replaced. Steve came over, looked at it and asked if anyone had tried to adjust the regulator, I said "no, they just gave me an estimate for replacing it". He adjusted it and at this point it appears to have solved the problem. While he was in the bathroom he noticed a leaky faucet and stopped the leak after working on it for 10-15 minutes. He said that if I didn't call him to report that the problem, with the toilet, was still an issue he would just send me a service call bill for $85. He also gave me an estimate to replace the water pressure regulator (if needed) which was several hundred dollars less that previous estimates.

Description of Work
Called them for an estimate on replacing a water pressure regulator, which is located in the crawl space under the house.

Steve of Euell's Plumbing has so much business that he can be hard to catch. Be persistent; it's worth it. His prices are very fair and he does good work. If he's late it's because other jobs proved to take more time than he thought. Once you have an appointment with him, he'll let you know if he's going to be late. Over the years he's done a lot of work for us, from leaky faucets to toilets, dishwashers, and washers/dryers. Highly recommended.

He is a great plumber. We have been using him for atleast 15 years.

Description of Work
He is coming today. He has done work for us before. On the last visit they replaced a toilet.

It was good. They were timely and efficient.

Description of Work
They installed a new sink and countertop. They also installed a faucet in the bathroom.

Extremely professional and provides quality work. I was told his expectations for the job and we went over his plan to accomplish the task. He went right to work and did not stop until he was done.He asked me to inspect the work to see if I had received what I needed. He provided me with an itemized bill and thanked me. I was very pleased!

Description of Work
Stephen added supply lines and drain for the installation of a sink and faucet.

Description of Work
remove toilet, replace seal and re-install toilet. the seal where the toilet rest was installed incorrectly and he had to drill it out and re-install the plastic mounting piece. took several hours. excellent work by Steven!

The Water company came to work on my neighbor's meter, but in the process broke the water line to my meter, which is next to theirs. Mr. Lee, of Euell's, contacted the Water company on my behalf and they eventually fixed what they broke. After that, they still maintained that I had a leak, and I asked Euell Plumbing to dig up the surrounding area. They determined it was just ground water. Battling the Water Company is very frustrating and Mr. Lee's intervention was most helpful.

Description of Work
Euell's dug up the ground around my water meter to search for a leak the Water Company claimed existed on the private line to my home. The water leak was caused by work the Water folks did. Mr. Lee, the owner went to bat for me with the water company.

I did have to call twice. Evidently, I misunderstood him regarding when he would be able to address the problem. Also, I think he has an answering service, which may have contributed to some of the miscommunication.

Description of Work
Repaired upstairs tub/shower leak. Thought it was water getting behind the tile, because the faucets had become loose. They did not charge us until, in fact, this was obviously the problem. I have not yet received a bill, so, therefore, I cannot tell you how much I spent. I have called and said the problem was fixed and to go ahead and bill me. My husband had the contact with them and said they were most courteous and knowledgeable.

I called them three times and they never called back. I even talked to their phone answering service and got no reply.

Description of Work
I wanted them to do some plumbing for my rental properties.

They are friendly, they come when you call, and they do good work.

Description of Work
They have been doing my plumbing for 20 years. The most recent time he came out, he replaced a leak in our fireplace.

Excellent. Steven and his assistant Tommy came out and got straight to work.

Description of Work
I need some drain cleaning and faucet tightening.

Overall experience was very favorable. We have used this plumber on many occasions over many years. In this case, Mr Lee promised to call us in one or two weeks to be sure that everything is satisfactory. Work has always been satisfactory, and in the past we found that his price was less than that of several other companies.

Description of Work
There appeared to be a leak at the base of the commode. Steven and helper came, by appointment, when they promised to come. They disconnected and moved the commode, found the problem, replaced the seal, and reconnected everything. The work was done expeditiously and without creating a mess in the bathroom. The men were uniformed, professional, courteous, and considerate. They removed their outdoor boots so as not to track through the house.

We had used Euells Plumbing Service many times in the past for our plumbing needs, so when our dishwasher stopped draining and was clogged up, we called them to come out and fix the problem. The gentleman was able to come out the very next day after I called, and he said that he would be there before 12:00 p.m., and he was there by about 11:15 a.m. I thought the guy was very nice, and he explained to us what he thought the problem was, and he found that not only was the dishwasher clogged up with food, but so was the drain pipes under the counter. He was able to unclog the drain, and he was so careful, that he did not even have to replace any of the pipes under the sink. He had everything done all at once, and he has not had to come back for any problems since.

Description of Work
Euells Plumbing Company came out to fix our dishwasher that was clogged up and would not drain out the water.

Euell s Plumbing Company did an efficient job on our toilet. It was great. They were here fast and got the toilet working again. The worker was very competent. They were competitive in the price.

Description of Work
Euell s Plumbing Company fixed our toilet that was stopped up.

Euells is my regular plumber whom I've used for the last twenty years. They also did a few other odds and ends that day. I believe he's honest and reliable. It took a few hours.

Description of Work
Euells installed our new dishwasher recently. They had to take out the old one and then reconnect the new one.

I used them before, so I called when there was water around the base of the commode. He pulled the commode and installed a new seal. There is no more water. It was a quick repair. They are good workers, and I would not hesitate to call on them again. I paid a small amount, but I just can't tell you what it was.

Description of Work
I had a commode repaired because of leaks.

Small local family-owned plumbing business servicing all your plumbing needs. Our mission is to deliver value to our customer. Value demands we render high quality service, with integrity, in a professional manner, at a fair price. To be recognized by all our customers as an excellent provider of professional, honest and skilled plumbing services and customer care. To provide our customers only top quality materials and name brands that command public trust.  …

With years of experience in the plumbing industry, we are the experts you need to take care of your home or business. We handle all of your drain cleaning and plumbing needs with great care. We will treat your home as we would treat our own. Give C&D Drain Cleaning a call today, we look forward to working with you! Our services include, small plumbing repair, clear drains, camera inspection, install sewer system, and more. Call or click to schedule an estimate today!  …

OVER 100 MORE "A" REVIEWS THAN ANY OTHER PLUMBER IN ARKANSAS. Committed to quality since 1980. (501) 435-3531 or NWA (479) 306-7776. Regardless of whether it's an emergency or routine plumbing service. We have won the Angie’s List Super Service Award 7 years in a row. We have been picked best of the best by the Arkansas Democrat Gazette for over 15 years. Best Of Best by Arkansas Business 6 years, Arkansas Times 5 years, And the Soiree Platinum service award. Additional DBA's - Bath & Kitchen Gallery Re-modelers, Ray Lusk Sprinklers. Additional phone 501-664-0940.  …

Bonded
Insured
All statements concerning insurance, licenses, and bonds are informational only, and are self-reported. Since insurance, licenses and bonds can expire and can be cancelled, homeowners should always check such information for themselves.To find more licensing information for your state, visit our Find Licensing Requirements page.
General Information
Free Estimates
Yes
Eco-Friendly Accreditations
No
Payment Options
Check
Senior Discount
YES
Emergency Service
Yes
Warranties
No

EUELLS PLUMBING COMPANY INC is currently rated 4.9 overall out of 5.

No, EUELLS PLUMBING COMPANY INC does not offer eco-friendly accreditations.

No, EUELLS PLUMBING COMPANY INC does not offer a senior discount.

No, EUELLS PLUMBING COMPANY INC does not offer warranties.