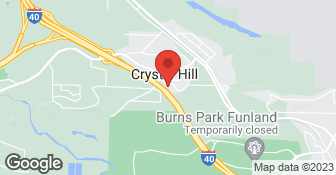 Description of Work
Talked to service guy.(Jimmy) 3 times. promised to be out never showed up

One of the owners of Aloha Pools personally called me and helped to resolve a problem... will update my review after the services are complete..

Description of Work
Modified review: The owner took care of my problem immediately. Thank you for your time and concern!

It went well but a little behind schedule.

Description of Work
Built a pool.

Although we were becoming dissatisfied with the work and the progress being done to our pool, we remained hopeful. The last payment we made to him was in mid-April with the promise of the concrete being poured the next day. Doug promised after that the only things left would be hooking up the equipment and plastering the pool. It is now the end of June and we still don't have a pool or concrete! Doug Tyler basically stole our money knowing he was not going to finish the job. We had a contractor come out to give us a second opinion, after being SHOCKED by what this contractor said, we decided to get 2 more opinions-- BOTH said the same thing. Basically, we only had one skimmer and 2 jets for an 18 X 38 foot pool, the tile wasn't done correctly, the pool lights, which were supposed to be LED and cost $500 each (we were getting 2) were not grounded and not code, several other issues did not meet code, the jets that were installed were not connected to any plumbing and there was no electrical at this point - which we paid to have completed, and were told was installed, in the second draft of payments in our contract. Thank goodness the concrete didn't get poured- had it been poured, there would be NO way to correct the problems. We have now hired another contractor to drill through the concrete in the pool to add lights, jets, another skimmer and a port for the pool cleaner/vacuum thing. Doug Tyler is a thief. I should have walked away after my initial misgivings and saved myself a lot of time and $20,000!!!!

Description of Work
Signed contract for in-ground gunite pool. Paid Doug Tyler 80% of cost, all work was done until the last payment.

Mark, the owner is absolutely fantastic. He is super responsive. Anything we need or any changes we need or tweaks to the quote, he is there and he is sending it by email. He is available by text, and he texts back at 10 o' clock at night. He is just a fantastic business owner. He definitely knows his stuff. They are installing my pool on Wednesday; they are starting the process.

Description of Work
Aloha Pool & Design gave me an estimate for installing a pool.

Set meeting up for yesterday @ 11AM. Employee avoided my calls- finally asking to postpone our meeting to "first thing tomorrow morning." @ 7AM I called to remind him of these arrangements. It is now 12:45pm. I have put priorities on hold waiting for this guy to show up, who has supposedly been "on his way" since 7AM.

Description of Work
Set meeting up for yesterday @ 11AM. Employee avoided my calls- finally asking to postpone our meeting to "first thing tomorrow morning." @ 7AM I called to remind him of these arrangements. It is now 12:45pm. I have put priorities on hold waiting for this guy to show up, who has supposedly been "on his way" since 7AM.

They came and drained the pool. They took up the old liner and put the new liner in. That was really about it. It took them about two days to get everything done. It all went well. It took about two months because they had to order the liner.

Description of Work
They replaced the liner in our pool.

If in the future if we need anything done with our pool we have a pool company when can rely on and call them if we need to. They started the job about a month before they expected to be able to. They were finished in two days and we expected about five days to a week before they would complete the job and as far as the actual work I don't think anyone could have redone the bottom of a pool any better than these guys did, well let me say I KNOW it could not have been done any better or smoother than it was done. They went above what they actually was suppose to do and they cleaned their mess up, they were just awesome. The only down fall about this company is they only do liner pools so if you have just a concrete I am not thinking they do anything with them. I would use these people no matter where I lived in Arkansas...We have already discussed with them when and if we have a new pool (which is what we need) put in that we would have them do it. I can not imagine anyone being disappointed with this company...Thank you Aloha Pools for living up to what the customer's standards are....

Description of Work
We had a wall caving in on the inground pool, also needed a new liner & was seperating from the concrete. The floor had roots in it & the shallow end was pretty much mudd from where the wall was caving in. We had only had this house fo r2 yrs & was told all this work had been done & the liner was pretty new(this ended up not being the truth) We had several bids. The first bid was about 14,000(including a new wall), the 2nd bid was from actuall friends that owned their own company they didn't want to touch it, the 3rd person I called nvr showed up to actually bid, and neither did the 4th person I called so we were pretty much at a lost & had decided we would have to wait until we could afford a new one. I had called Aloha Pools & spoke with a Barry they came out as promised and gave an estimate, the estimate was 4,000, and that was to replace liner repair & redue the shallow end of the pool & repair where the pool was coming apart from the concrete. They explained to us that this was a temp repair & went into details as to explain it could last a yr r it could last a long time but they did say it should last awhile, I appreciated that they were very honest & gave us choices on what we could do. We had to pay 50% & the other when the job was done. We picked a liner out paid the 50% & they told us they would call when they were coming out. They did a lot sooner than we expected and it was on a Saturday morning the guy was late but he called & then he had to call again, I was thinking oh no I hope they are going to do this right. We thought they were only going to come to drain the pool as our pool is old & we do not have a drain but no they started and finished the job the following day. They drained it & took the old liner out & started digging all the mudd out. Then the guy laid the pool crete to fixed the bottom of the pool (he was suppose to do the shallow end ) but went over the WHOLE pool and it was as smooth as it could be perfect...They left & we have a large Rottweiler & they told us not to let the dog get into the pool (which my husband did not pay attention to ) & the dog not only got into it but dugg some of it back out at the deep end..we just paniced called the guys they came out - repaired that and finished the pool that day. IT LOOKS GREAT - They left their blowers there (somethng) for while the pool fills up & came by the next day and picked that up. A month later as we are getting the pool ready we realize they had put the skimmer in backwards (it is a older pool and I think noone uses these type skimmers anymore) my husband would have turn the skimmer around & fixed it but he had just had surgery, I emailed Barry late in the evening (aft hrs) he called my husband promptly the next day & they had a guy out to fix it....Praise God they are really awesome. I do not fore see having any problems & if we do it would not be anything this company did, they went well and above what they had agreed to. It is so noce to actually get what you pay for in today's time.